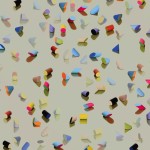 Front cover of ‘Escape From Evil’

The third album by Baltimore’s Lower Dens promises to see Jana Hunter move them away from subjects like evolution, chemistry and science fiction towards affairs of the heart and soul. 2012’s Nootropics, while it took a while to penetrate, grew into one of the most rewarding albums released in the last five years to revisit, a mix of post-rock and pop that left plenty of space for the imagination to take root. Escape From Evil emphasises the pop side of the equation this time round, in a bid to make their heartfelt tracks feel more immediate and accessible for a larger audience.

Like fellow Baltimoreans Beach House, their songs unfurl gracefully from humble, simple rhythms into mesmeric peaks. As ever, Lower Dens’ strength comes from the constant interplay between the icy surface qualities of the songs and the warm seduction beneath them. Opener ‘Sucker’s Shangri-La’ kicks us off in familiar territory, with waves of guitar and digitally-delayed drums so all-enveloping you can practically sink into it. ‘Ondine’ sounds a bit like Warpaint’s material from last year with its fiddly guitar anti-solo. ‘Quo Vadis’ is an understated yet intense expression of longing, as singer, writer and chief musical engine Hunter smoulders “they don’t know anything / maybe they won’t say” at the object of her desire.

But as Escape From Evil wears on it ventures more into radio-friendly territory. Lead single ‘To Die In L.A.’ is built on clipped synth hook with robotic rhythms and twangy country guitar thrown in. ‘Company’ does the same kind of thing, only with a deep, satisfying bass guitar rumble as its foundation. ‘Non Grata’ could even pass for an obscure track on one of those ‘Best of the ‘80s’ compilations that emerge every so often, full of soft guitar licks and neon synths. But it’s pop as imagined by a group like Wild Beasts, with shimmering guitars and delicious, hypnotic rhythms making for the most pleasant of listening experiences.

Moments like this, minor pop epics using the minimum of ingredients, is what forms the spine of the album. However, there’s a couple of mis-steps that prevent Escape From Evil from being considered in the same bracket as its two predecessors. The dull ‘Electric Current’ is lacking exactly that, and the natural anthem ‘I Am The Earth’, in which Hunter’s attempt to channel the earth goddess Gaia needs to be delivered with a little more force. These moments aside (they appear back-to-back in the album’s second half), Escape From Evil is a fine album, worthy of exploration for sheer pop pleasure. (7/10)