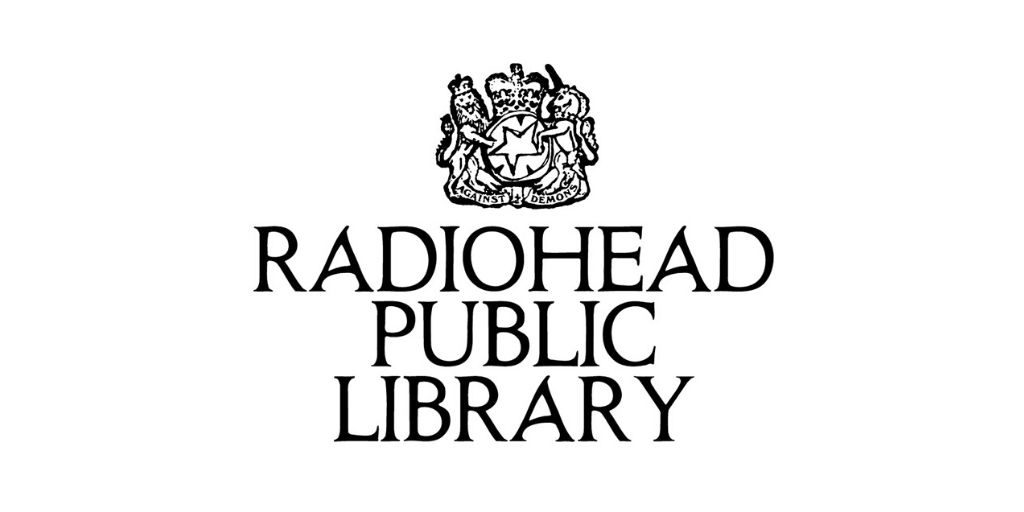 Until the launch of their new online archive spanning their entire history, dubbed the band’s ‘Public Library’, Radiohead were probably the most secretive major label act around. They’ve always been masters at generating existential dread and anxiety, at providing thesoundtrack to being alive and uneasy with the world, but that wasn’t done just through their music. Additionally, their videos, merchandise, literature and various marketing and promotional materials helped to underscore and reinforce the message, and it’s this that the Radiohead Public Library has gathered up so wonderfully in one place.

Appearing suddenly at the end of January – and which will probably be taken down at some point in the future with equal abruptness – the Radiohead Public Library represents an unprecedented act of sharing from a band who’ve hitherto made secrecy one of their most valued tenets. Split up into colour-coded era linked to each of their nine studio albums, accessible either by scrolling or by a bar running horizontally along the top, the new archive initially seems like a random information dump of panels and windows, but its logic be grasped pretty quickly. There are clips of performances (sometimes of entire gigs), unreleased material, old versions of the site, T-shirts from the group’s history that are on sale once again. Essentially, it provides something pretty close to chapter and verse on one of modern music’s most famous and yet fundamentally unknowable bands.

So, for those of who’ve not taken the plunge – and it is a deep, deep dive! – here’s a look at the most notable aspects of the Radiohead Public Library!

Undoubtedly the most important aspect of the new archive is the emergence of some rare and/or previously unheard Radiohead music, which will delight the hard-bitten and the completists. Available for the first time on streaming platforms is the 1992 Drill EP, kept to a 3,000-run of CDs initially and never re-issued since and containing the rare ‘Stupid Car’ as well as early versions of tracks that would later arrive on Pablo Honey. There’s also the 2005 one-off ‘I Want None Of This’, released on the Help! A Day In The Life compilation, and the TKOL RMX8 EP, which was never released physically in 2011, containing remixes of The King Of Limbs album tracks from Jamie xx, Anstam and Nathan Fake.

Each of the album-specific sections comes with a great deal of live footage, from intimate gigs such those the band played around the Kid A / Amnesiac albums and MTV’s Most Wanted gig around 1993 to huge gigs like the two-hour show in 2010 to raise money for Haiti and clips from 1997’s epochal Glastonbury headline set. And that’s not even counting the revived webcasts from the mid-Noughties, including the brilliant ‘Thumbs Down’ broadcast dating from the In Rainbows era. There’s simply hours and hours to get your ears round here, so be methodical!

This 95-minute documentary film, directed by Grant Gee and released in 1998, captured the whirlwind of media attention and popular adoration that accompanied Radiohead’s lengthy OK Computer world tour. Avoiding on-the-road clichés and compiled through awkward interviews and surveillance footage of the group’s hotel rooms, it’s essentially a long mood piece, showing a band deeply uneasy with massive success, especially Thom Yorke, and it makes for totally compelling viewing. It’s now available to watch on the Public Library, without having to resort to crappy YouTube compilations.

As well as being massively innovative in and of itself, Kid A was also promoted in a new and unusual way, through a series of ‘blips’ or ‘stings’ that were aired on TV in the weeks running up to the album’s release in late 2000. Typically lasting from 5 to 15 seconds in length, featuring clips of music from the record (sometimes cut-up or distorted) and more often than not starring the creepy little toothy bears, they seemed to speak to creeping surveillance, ecological collapse and post-apocalyptic societal breakdown. The most unsettling seem to share the same kind of low-level terror as Jonathan Glazer’s recent short film ‘The Fall’ – no coincidence, as Glazer directed the cryptic video for OK Computer’s ‘Karma Police’ single… Anyway, all of these are now available in one continuous 15-minute video!

Around the time of the politically-charged Hail To The Thief, Radiohead commissioned four collections of short films that were broadcast on Radiohead Television under the name The Most Gigantic Lying Mouth Of All Time and then released in a hard-to-find DVD in 2004. In all, they total nearly two hours’ worth of webcast footage, animations, promotional material and live clips, and are revived on the RPL.

Originally available for a short time around the same time as The King Of Limbs, the intriguing Polyfauna app allowed users to create personalised environments, based on music and art from the band. It was a tool that Thom Yorke later utilised to help him create his 2014 solo album Tomorrow’s Modern Boxes. The Radiohead Public Library makes the app available once again.

It’s hardly surprising that a band as cerebral and literate as Radiohead have a massive archive of the written word. Virtually everything you can think of is scattered around the RPL, from the hidden artwork in the CD tray of Kid A that presaged the word-cloud artwork of Hail To The Thief to the King Of Limbs-era newspapers called ‘The Universal Sigh’ (check out artist Stanley Donwood’s unsettling ‘Sell Your House And Buy Gold’ essay…). There’s also the ‘Diet of Worms’ scrapbook, dating from the mid-Noughties, as well as an entire back catalogue of the group’s W.A.S.T.E. newsletters and old (defunct) versions of their official website. Truly, this aspect of the Radiohead Public Library is a rabbit-hole that could cost you days!