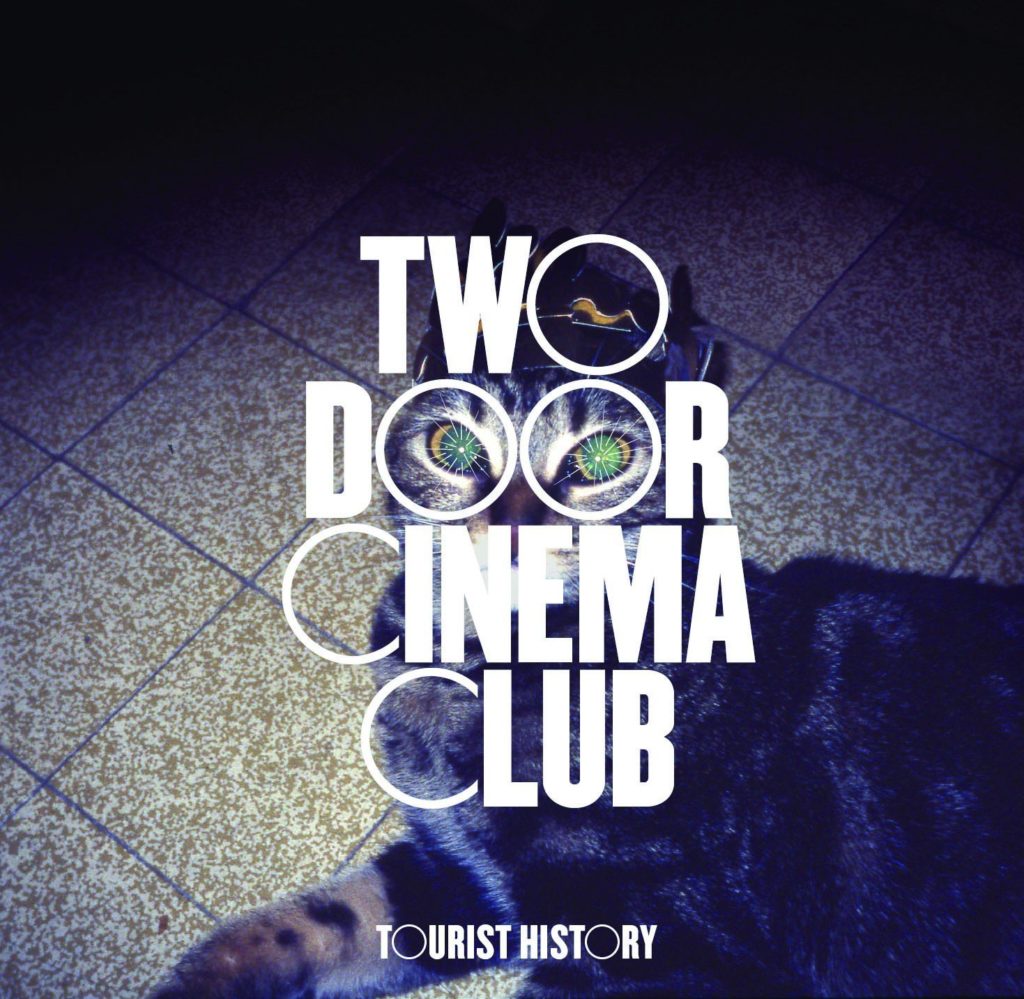 The start of the last decade is generally held to have been, at best, a fallow period for guitar-based indie music or, according to naysayers, the beginning of the end of the genre. Certainly, as the 2010s dawned, indie-rock was certainly dwindling as a credible cultural force, undermined by changes in technology, consumption and fashion. But every musical era has an exception to its rules. Countervailing pop’s grand resurgence and the irritating rise of EDM, a debut album was quietly released in mid-February on the French independent (and largely electronic) Kitsuné imprint. Back then, Bangor’s Two Door Cinema Club had a fervent but firmly local following, largely based upon their reputation as impressive live performance, and who had self-released their debut EP Four Words To Stand On in late 2008. But the release of their first full-length, Tourist History, would slowly take them from national stardom to international acclaim and the status of festival favourites.

Recorded between Eastcote studios in north-west London, where 2DCC had relocated in early 2009, and Paris with the assistance of Phoenix producer Phillipe Zdar, the band quickly assembled Tourist History, re-working three of their aforementioned EP’s tracks alongside plus seven new ones. Critically, they built up to the release of their debut gradually, releasing a steady stream of singles from April 2009 to February the following year when the finished article was released. While selling a little over 5,000 copies in its first week and scraping the top fifty of the UK Albums Chart, 2DCC put in the hard graft and toured relentlessly behind Tourist History, winning fans over one by one, and it peaked at no.24 a full 15 months later in May 2011, before turning platinum in early 2013 with sales of nearly 400,000 to date.

Okay, so Tourist History wasn’t particularly original. In the choppy angularity of Sam Halliday’s guitars, you can hear Noughties post-punk revivalists such as Bloc Party and Franz Ferdinand. In Alex Trimble’s breathy falsetto that occasionally breaks into a skyscraping chorus, there precursors in the shape of Death Cab For Cutie’s Ben Gibbard or The Shins’ James Mercer. But by God, it was a hell of a lot of fun. By sticking to the key principle of economy in songwriting, 2DCC fit ten sleek, guitar-pop Exocet missiles in just a little over 32 minutes.

There simply isn’t an ounce of fat on Tourist History – each of its 10 maddeningly catchy tracks. This wasn’t the result of some kind sense of workmanlike duty, of keeping things basic and unfussy, but simply because they didn’t need to do anything else. From the tingling intro of ‘Cigarettes In The Theatre’ to the gentle gallop of closer ‘You Are Not Stubborn’, these tracks immediately engage the listener, with the usual frills and histrionics of rock either purged or subordinated to the task of moving the songs along. The band’s irresistible calling card ‘Something Good Can Work’ is built on a faintly tropical, Graceland-esque rhythm; the glinting indie-pop miracle of ‘What You Know’, still used to close 2DCC’s live sets; and the modest indie-dancer ‘Do You Want It All?’ that evokes someone looking shyly up from their feet on the dancefloor. More anthemic were the soaring, sunbathed ‘This Is The Life’, the playful ‘I Can Talk’ and the yearning chorus of ‘Come Back Home’. It’s only on the ninth track, ‘Eat That Up, It’s Good For You’, that the album drops the tempo and intensity even slightly.

It sounds like the easiest thing in the world to keep up this relentless, sugar-rush onslaught, but it’s unbelievably difficult to get right in practice. It’s normally the preserve of straight-laced guitar bands who don’t have either the confidence, ambition or talent to make more complex tracks, or the kind of thing that big bands attempt to do to reconnect with their roots once they’re done with the rarefied heights of arena and stadium tours and the kind of music you need to fill those spaces. Think of the amount of perfectly decent yet fundamentally anonymous and unmemorable albums that squeeze 10 or so songs of similar length, construction and pace into a half-hour or so, and you realise the nature of Tourist History’s achievement.

Nimble and precise drumming, both live and programmed, swiftly propelled these yearning verses and big-hearted, optimistic choruses with a clinical precision that you can’t help but both admire and move at least some part of your body to. Miraculously, unlike some of their contemporaries in British indie, the self-consciously ‘fun’ Wombats being a prime example, this effusiveness never came across as contrived or forced. Rather, it was the unmistakable result of a naturalistic love for pop melodies combined with their modest, self-effacing charisma.

Unfortunately, it’s a trick that has yielded diminishing creative returns for Two Door Cinema Club in the subsequent decade. 2012’s Beacon, which hit the top of the UK Albums Chart, confirmed the band as one of the biggest in Britain, but the overly-lengthy gap between that and when third album Gameshow was eventually released in late 2016 into a music scene that had moved on without them. Last year’s disappointing False Alarm merely confirmed what’s likely to be their permanent status, as perennial headliners of middling, guitar-heavy small British festival line-ups that cater to thirty-somethings reliving the recent past. But they’ll always have the dazzling melodies and irresistible, grin-inducing rhythms of Tourist History to bowl over those festivalgoers, a reminder of their power when they’re at their best.

Listen to Tourist History by Two Door Cinema Club here via Spotify, and tell us what you think below!