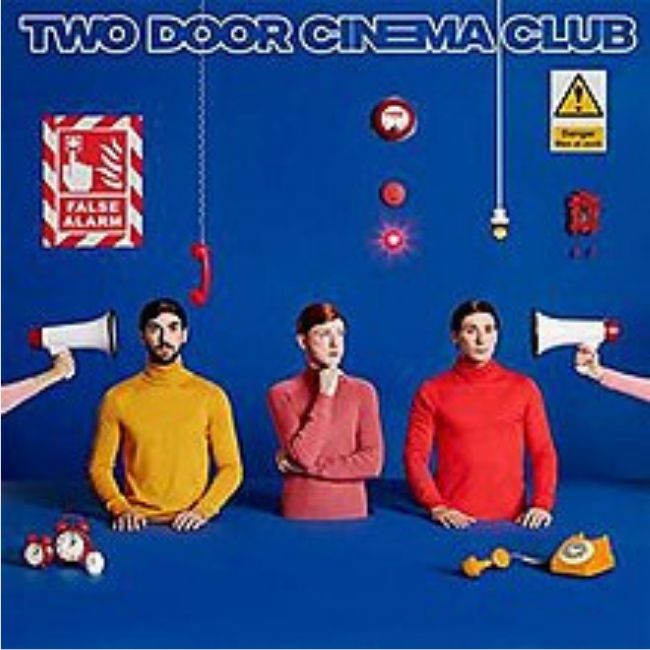 It’s easy to run into some difficulty when trying to make sense of what seems to be a burgeoning indie comeback in 2019. Besides the obvious people on the frontlines of this phenomenon, many of whom you’ll run across countless times on the patronisingly mistitled and non-indicatory “Women in Indie” playlists on every corporate streaming platform, there seems to be a fair few bands that were once snidely deemed “indie landfill” making comeback records, their names consistently popping up on promotional leaflets for reasonably large venues, seeing which makes you actually feel like you’re in 2011. Two Door Cinema Club may possibly be the most accelerated nostalgia-inducing of them all, with hits like ‘What You Know’ and ‘Undercover Martyn’ from their excellent 2010 debut Tourist History being etched into the memory of millions of easily excitable indie party attendees.

While they definitely entered the scene putting their strong foot forwards, with nearly all of the songs off of Tourist History containing some of the catchiest and most ecstatic guitar instrumentals amongst their endless indie peers, Two Door Cinema Club seemed to come into more and more doubt about their identity with each subsequent release. 2012’s Beacon was the slightly less charming and endearing twin of Tourist History, while on 2016’s Gameshow the band seemed to try and display some oddly meta self-awareness, by incorporating electronica into their hooks and singing of nostalgia and the oh-so-depleted subject of “Social Media Bad”, to varyingly fun results. Now, on False Alarm, the band seem to be continuing down the path laid out by their previous release. It not only dabbles in electronica, it might actually might pass off more as an electro-funk (sidenote, do genres still mean anything anymore?) project than an indie rock one.

Certainly, 2DCC still retain their impeccable talent – to the extent that it’s possibly a curse – of writing the most effortlessly dancefloor-ready hook each time they lay a hand on a major key (all the time). The trouble with False Alarm comes when the band seemingly try to be experimental, only to have their bop sensibilities derail any attempt at standing out. Coming back to 2016’s Gameshow, the lead single ‘Bad Decisions’ was a rock-solid funky throwback of a tune, kind-of perfectly mirroring its subject matter in its sound. Possibly, the song went over so well that the band decided to make an album full of amped up ‘Bad Decisions’. Opener ‘Once’ is still trying to convince us that the band are the Bee Gees of indie. Follow up ‘Talk’ would not seem too out of place on a DNCE record. ‘So Many People’ is just ‘Once’, again.

False Alarm continues along a bopable pace throughout, rarely relenting in its over-zealousness. ‘Think’ slows down by maybe 10bpm, and features that slick Stevie Wonder-inspired auto-tune. ‘Nice To See You’ also tries to break it up a little bit by bizarrely featuring Open Mike Eagle, and to its credit, catches you completely off guard, leaving you pleasantly surprised yet also questioning the timeline you’re living in. Once again, all of the songs fall under the “Social Media Vapid and Bad” genre, which is a really deep message when you’re 13 years old and then never again. Not to completely deprive the band of any kudos, all of the songs individually are, indeed, Bops. However, a whole album of tracks that seemingly have nothing truly distinct about them gets tedious and obnoxious to listen to about eight to ten minutes in, and False Alarm suffers from nothing else as much as this desperate need to re-capture that same easily excitable first-time-club-goer audience of 2010. But in 2019, so it sings about current affairs, you see.

Two Door Cinema Club have faltered ever so slightly again, but with each attempt these falters seem more and more lethal to an already wavering sense of social relevance. I would not be surprised at all to hear any of these songs at high school house party, almost as equally as I’m still surprised every time I see The Wombats come up in sold-out tour schedules. Maybe perky, danceable indie will never truly completely disappear, but with bands grasping at new-to-them, old to everyone not from a generic white suburb sounds and radio spots that aren’t there anymore, with such self-assuredness and reckless abandon, it’s hard to see this kind of maintaining any form of critical credibility. (5/10) (Ellie Wolf)

Listen to False Alarm by Two Door Cinema Club here via Spotify, and tell us what you think below!