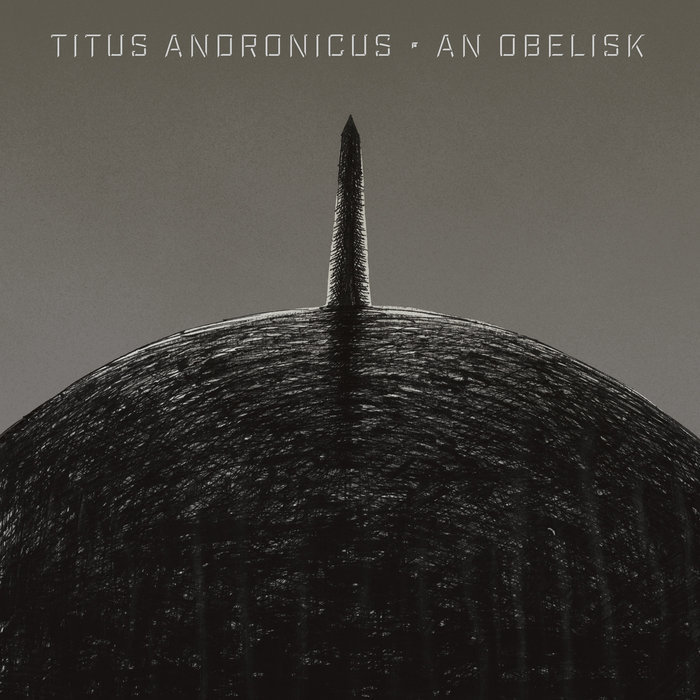 Stripped back and emotionally direct, it’s difficult not to see the bar-room rock leanings of ‘An Obelisk’ as an over-correction in reaction to last year’s ‘A Productive Cough’.

There are many words one might conjure up to try to describe New York-based rockers Titus Andronicus – impassioned, subversive, and epic all come to my mind – but ordinarily “basic” wouldn’t be one of them. And yet the band, who only a few years ago put out a sprawling 93-minute rock opera, seem to have adopted something of a back-to-basics approach for their latest album. At 38 minutes An Obelisk is easily their most concise work to date, and it’s also their least adorned. Even their more stripped-down records like The Airing Of Grievances and Local Business are full of lengthy songs beefed up by strings and pianos and horns. Their last album, the mostly befuddling A Productive Cough, featured more than twenty musicians, and included a first-person cover of ‘Like A Rolling Stone’ that dragged on for nearly nine minutes.

But with An Obelisk, Titus Andronicus strives for a purer sound, recording live with only a four-piece and eschewing overdubs – perhaps in an attempt to capture the energy of their renowned live shows. That sonic modesty finds a companion in frontman Patrick Stickles’ straightforward lyricism. Recently he told Vice that 2010’s The Monitor – a gutsy concept album loosely structured around the American Civil War, and to my mind one of the greatest rock records of the 21st century – was his second-to-last favourite of the band’s albums. “The lyrics are full of references and allusions and shit,” he said. “That’s wack. That’s college kid shit. I should’ve come up with my own ideas.” This seems to be the attitude with which he approached the ten songs that make up An Obelisk.

The complex, reference-heavy narratives that have come to define his work are mostly absent here, replaced by bare expressions of raw emotion. “It seems the Earth is speeding quickly / Towards a grave catastrophe,” he furiously shouts on ‘(I Blame) Society’. (The title speaks for itself.) “Everywhere there’s someone suffering / Tumult around the world,” goes the chorus on album-closer ‘Tumult Around The World’. Here a lament of societal decay isn’t allegorically mapped onto the Battle of Hampton Roads, it just is.

None of this is a bad thing. Stickles’ unabashed emotion has always been central to Titus Andronicus’s appeal. His rousing anti-establishment screeds and incisive self-reflections are well-complemented by the stripped-back punk sound that producer Bob Mould (of Hüsker Dü) helps the band to assemble. Rollicking opener ‘Just Like Ringing A Bell’ – its nod to Chuck Berry being one of the few “references and allusions and shit” that have survived Stickles’ maturation – starts things off with a bang. “They’re making a dirty fortune selling something that’s barely working,” Stickles cries, the contempt in his voice plainly on display. “An inferior version of rock and roll / Or whatever else ever has touched your soul / Call it what you will, there’s a billion of them they sold.” He goes on to remark that “The entire world is going to hell / But I in no way blame myself.” Here the band sounds at the top of their game: spirited riffs and up-tempo rhythms providing a perfect avenue for Stickles’ diatribe.

The next track, ‘Troubleman Unlimited’, establishes something of a dual theme that extends across An Obelisk. The societal lament of ‘Just Like Ringing A Bell’ is balanced by a more introspective examination. Here Stickles reflects on his own stubbornness: “You see, I used to be the problem child / I’m only my own problem now / Now I find that I’m the same old wise guy they rightly threw out.” Later on ‘Beneath The Boot’, another such inward-looking song, he admits that perhaps society isn’t solely to blame: “I say I’m innocent but it isn’t true / I’ve done things I wasn’t meant to do.”

To be sure, this is not merely a slapped-together collection of tossed off punk songs; there is much thought put into the writing and the sequencing, even if the resulting narrative isn’t of such a grand scale as that of the band’s past work. And frankly there might something to be said for the album’s smallness; not everything has to be an epic.

It would be easy to read An Obelisk as a corrective to the poorly-received A Productive Cough; where that record was bloated and loose, this is lean, free of any real excess. But knowing frontman Patrick Stickles, the change likely has less to do with critics than it does his own restlessness. In fact, each of their records seems to be something of a counter to previous efforts: the shabby balladeering of A Productive Cough followed the blown-out ecstasy of The Most Lamentable Tragedy, and that came after the sullenness of Local Business, and so on.

In that sense, it was perhaps inevitable that they would eventually fall back on that meat-and-potatoes rock’n’roll sound that has always been their foundation. The band sounds tight and Mould’s engineering is satisfactory, but the power chords and conventional song structures eventually grow monotonous; by record’s end, it all begins to run together.

Even listeners frustrated by A Productive Cough may find themselves wishing that a sliver of whatever it was that compelled Patrick Stickles to include a nine-minute Bob Dylan cover had found its way onto this record. Stickles is a compelling personality, and that will likely remain true as long as he continues to make music, but ultimately Titus Andronicus is at their best when he’s avidly pursuing bold ideas, and unfortunately An Obelisk doesn’t have the gumption to match the band’s previous heights. (6/10) (Brendan Nagle)

Listen to An Obelisk by Titus Andronicus here via Spotify, and tell us what you think below!