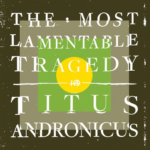 Front cover of ‘The Most Lamentable Tragedy’

New Jersey punk rock four-piece Titus Andronicus made one of the most celebrated underground albums of the decade so far with their second effort, 2010’s The Monitor, an audacious concept album about the American Civil War that scraped the depths of the national psyche and came up with treasures aplenty. Their troubled lead singer, Patrick Stickles, won plenty of fans for his cuttingly incisive lyrics and his songs’ intricate arrangements. However, its follow-up, 2012’s Local Business, underwhelmed many of these fans (despite being pretty decent), meaning Titus Andronicus have had to dig deep to unite all these converts once again.

What they’ve come up with is their second masterpiece in half a decade. The Most Lamentable Tragedy is pretty daunting on the face of it: a 29-track, 93-minute long rock opera divided into five parts, that not only rarely fails to hold the listener’s attention (a minor miracle in its own right) but frequently transcends the weighty subject matter and should fully restore their reputation for staunchly independent punk rock thrills. In a similar fashion to Hüsker Dü’s classic 1984 double album Zen Arcade, the narrative is loosely based around a character called ‘Our Hero’, an obviously biographically-based construct who is plagued by self-esteem issues and mental health disorders. The character encounters a doppelganger who is physically identical but psychologically straight, sober and satisfied, and tries to convince Our Hero that the answers to his problems lie within himself.

By doing this, Stickles has built a fictional mechanism to play out his personal torment by proxy, a conceit upon which to project his roiling mixture of neurosis, inner pain and self-loathing and therefore validate his emotions. It works much, much more effectively than the often flinchingly uncomfortable Local Business. Just like the grotesquely excessively bloodshed of the Shakespeare play from which the band takes its name, you can’t take your eyes away as the carnage of TMLT unfolds.

Not only is it the most ambitious Titus Andronicus album yet in terms of structure and arrangement, they’re also louder than ever before. The volleys of melodic punk on the first proper track (in length, they range from seven seconds to nearly 10 minutes) ‘No Future Part IV: No Future Triumphant’, which sees Stickles drop a huge range of generational signifiers to indicate the album’s massive scope (rhyming “Rolling Stones” with “broken homes”), gets things off to a blazing start. Despite the dark and graphic imagery, with lyrics like “flesh that roasts on smouldering coals”, Titus Andronicus achieve the same kind of uplifting catharsis as Springsteen or The Hold Steady. The noisy, rattling punk of ‘Dimed Out’ (referring to when every dial on an amp is turned up full) is a thrash-tastic highlight, but moments like this are often placed next to lean, clear moments of traditional rock like ‘Fired Up’, presenting a neat schizophrenic dichotomy in styles that reflects Our Hero’s inner torment.

The muscular, straining-at-the-leash full throttle punk of ‘Stranded (On My Own)’ and the sleazy, Primal Scream-esque bar-room blues of ‘Lonely Boy’ see Stickles channelling the same emotions in different ways – on the latter, he’s revelling in his isolation rather than raging against it. The twin 9 minute centrepieces ‘More Perfect Union’, which ramps up the tension from a beginning of muffled drums to a breakneck sprint to the finish line, and the oblique ‘(S)HE SAID / (S)HE SAID’ with its deep, almost Black Sabbath feel, are the showstoppers. On the second, Stickles spans everything from his eating disorder to his fear of selling out to the male pysche’s sense of sexual entitlement. “I need to buy something (or) eat something (or) fuck someone…” begin most of his lyrics, and it’s an expertly paced track that really gives insight into its author. That sense that, despite the narrative conceit, Stickles’ id is never particularly deep below the surface makes the whole album easily relatable.

The second half admittedly contains one mis-step, a strange choral version of ‘Auld Lang Syne’ that doesn’t seem to fit, but not even Tommy, still the gold standard for rock operas, is perfect. There’s more than enough musical variation to pique the interest of even the least familiar listener to this genre. ‘Into The Void (Filler)’ channels the raw rockabilly feel of Drenge’s recent album, and this is placed in between the campy fun of ‘I’m Going Insane (Finish Him)’ and the piano-led ‘No Future Part V: Endless Dreaming’, which steers clear of soporifics to underscore the unresolved crisis at the centre of Our Hero. ‘Fatal Flaw’ is personal to Stickles, but also references the dramatic mechanism by which any character in a tragic play becomes tragic, and it reminds you that TMLT is actually a show. As Consequence of Sound have already pointed out, despite the dozens of literary and musical allusions, you don’t need to get any of them to enjoy TMLT. In their words, it’s a “batshit crazy rock opera about what it’s like to be batshit crazy.”

Far more than just a ‘rock opera’, with all the folly and excess that normally entails, TMLT is also an extended allegory for the experience of manic depression, with Stickles’ personality and songwriting capable of holding the entire unholy edifice together. It never comes across as merely ‘confessional’ or emoting, which can often be quite artificial qualities when applied to loud music. There’s a genuine pain that remains unresolved despite the narrative arc, an unsettling question-mark that means this record will likely be regarded as the equal of, if not better than, The Monitor in terms of its profundity. (9/10)

Listen to The Most Lamentable Tragedy here!