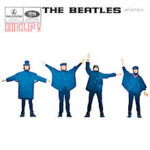 As both we and many others studying them have said before, The Beatles are a deceptively simple band to analyse, since so much of their fame and so many of their achievements look inevitable or preordained with the benefit of hindsight. However, their epoch-defining success was not as smooth as a cursory glance makes it appear. Mid-1965 presented the first of (arguably) two existential crises they faced in their career. They had of course continued to be wildly successful in commercial terms, but their last album Beatles For Sale, released in December 1964, had sounded just a little tired creatively. One too many by-the-numbers cover versions populated an album of distinctly static and downright moody original compositions, and the group was treading water where previous records had seen Lennon and McCartney surging into unchartered territory.

Furthermore, The Beatles now had serious competition, both in the charts and for the loyalties of their fans. The Stones had secured two Number 1 singles, and The Kinks and The Who had recently emerged, all bands that were flooding through the door they themselves had kicked down just two years previously. In 1965, even the biggest band’s conventional showbiz career path ended, more often than not, in the creative dead-end of Vegas residencies within half a decade at the top. Their fifth album Help! was not especially promising on the face of it: meant as the nominal soundtrack to their second movie, it was not normally the sort of context in which bands did their best work (notwithstanding The Beatles’ own stunning A Hard Day’s Night in early 1964). But far from being an exercise in box-ticking that some might have dreaded at the time, Help! pushed the boat out further than they ever had before, and is a key factor in explaining how The Beatles were able to defy the pop music conventions of their time and change what a music fan could expect from a band.

In many ways, it’s the final chapter of the first phase of their career, being the last of their albums to feature a cover version until 1970’s swansong Let It Be. After this, they would begin to enter the psychedelic, progressive part of their career with Rubber Soul, recorded and released just four months later. It doesn’t stack up against their later offerings, but looking back on their whole career tends to obscure the reality that Help! was their most varied offering yet, with some of the most sophisticated examples of their songwriting so far, as well as being the album in which one can really hear their talent for arrangement and sonic texture begin to blossom. As well as continuing with the folk music themes they had picked up from Bob Dylan, there are hints of the Indian instrumentation and pyschedelia that would come to characterise their later work (particularly Lennon’s and Harrison’s songwriting) on the excellent ‘Ticket To Ride’, and orchestral sounds such as the woodwind on ‘You’ve Got To Hide Your Love Away’.

As if to address any possible concerns of a lack of energy five albums into their career, Help! comes out swinging with its title track. Indeed, the very first sound you hear is Lennon’s desperate “help!” as the group gets right down to business, thundering through the track with an effortlessness that comes only to the tightest-knit of groups. It also hinted at darker subject matter just beneath the surface, not that anybody was paying attention at the time. Lennon recounted to Playboy magazine in 1981:

“When ‘Help!’ came out in ’65, I was actually crying out for help. Most people think it’s just a fast rock-‘n’-roll song. I didn’t realize it at the time; I just wrote the song because I was commissioned to write it for the movie. But later, I knew I really was crying out for help… …I am singing about when I was so much younger and all the rest, looking back at how easy it was. Now I may be very positive — yes, yes — but I also go through deep depressions where I would like to jump out the window, you know. It becomes easier to deal with as I get older; I don’t know whether you learn control or, when you grow up, you calm down a little. Anyway, I was fat and depressed and I was crying out for help.”

Later, he would say that he wished he’d recorded it slower with an acoustic guitar, but such a version would surely have lost the panicky sense of mania of the song we know and love.

The dazzling single ‘Ticket To Ride’, yet another transatlantic #1 hit for the band, kept The Beatles ahead of the game in 1965, with Ringo’s shifting, stop-start drum line and Harrison’s blaring, trebly folk-rock riff giving a clue as to what lay in store for the band. The relatively slow pace made it something of a risk for them to release as an A-side – it only spent one week at the top in the US – but its success was a beacon for other bands, showing that the record-buying public was hungry for something deeper than simple pop, quickly influencing the likes of The Kinks (‘See My Friend’) and The Yardbirds (‘For Your Love’) later in ‘65 and planting the seeds of psychedelia that would bloom two years later. As far as their own career was concerned, it contained that Eastern drone that would become one of their trademark sounds in the near future, and Ringo’s mesmerising drum pattern would be the inspiration for ‘Tomorrow Never Knows’ in 1966.

Best of all, arguably, was McCartney’s haunting ‘Yesterday’, a personal breakthrough for his songwriting that is one of the most enduring songs ever written in the pop era, with more than 2,200 covers officially recorded since. McCartney says he heard the tune in a dream, woke up and immediately wrote it, fully formed, and then undertook weeks of research just to make sure he hadn’t heard it somewhere before. It’s testament to his songwriting talent, which had the gift of the personal touch where Lennon’s was becoming increasingly abstract. Though ‘Yesterday’ is obviously extremely difficult to try to listen to with any kind of new perspective, its beauty is quite breathtaking, and demonstrates that The Beatles could deepen a song with orchestral arrangements and not make it sound kitschy or throwaway.

The amusing fast-paced country pastiche ‘I’ve Just Seen A Face’ is just a banjo and a fiddle away from bluegrass, and the joint vocalising on the folk-tinged ‘Tell Me What You See’ that featured unusually prominent percussion, show that the group’s Dylan infatuation was particularly long-lasting. The best of these folk-influenced numbers is the plaintive ‘You’ve Got To Hide Your Love Away’, with its world-weary and vulnerable outlook underscored by the delicate flutes. This contrasts neatly with the groggy, hungover McCartney composition ‘The Night Before’, with its nagging call-and-response interplay. Harrison’s two songs, the gentle blues shuffle of ‘You Like Me Too Much’ and ‘I Need You’, are unexceptional but show slow but steady improvement as the years went by.

Sure, there were some makeweight inclusions that prevent Help! from genuinely being considered as one of their best albums. Ringo’s ‘Act Naturally’, a cover of a Buck Owens original, suggests that the tradition of finding a song for him to sing was becoming a pain in the arse, while the simplistic ‘It’s Only Love’ was quickly disowned by the band as unrepresentative of their sound at that time, feeling like it belongs on one of their first two albums. The closing cover of the rock’n’roll standard ‘Dizzy Miss Lizzy’ also sounds completely phoned in, and would be the last time The Beatles ended an album with a rock’n’roll cover. Somewhat better than these are the back-to-back ‘Another Girl’ and ‘You’re Going To Lose That Girl’ which, although respectable and finely executed, are the kind of songs that Lennon and McCartney could write in their sleep by this point.

The fact that The Beatles’ albums are now turning half a century old gives us a chance to revisit them one by one, disc by disc, and therefore analyse the risks they took and the ground they gained at each point in time, in a way that’s not possible with a retrospective whole-career viewpoint. Any Beatles fan would be hard pushed to place Help! even in the top half of their personal favourites list, but that’s testament to their ingenious approach to writing and recording that kept them relevant throughout the ‘60s, probably still the decade in which pop music changed at the fastest rate it ever has. 1965 was the year in which The Beatles transitioned from a regular, gigging, pure entertainment band to the cutting edge, studio-based innovators that recorded the bulk of their legacy. Help!, despite its obvious weaknesses, is crucial to understanding that change.