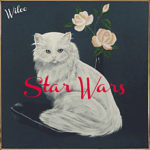 Throughout their two-decade career, Wilco have been relatively unchanging in their musical disposition yet, strangely, have always been hard to pin down. For a time, they were arguably the best alternative rock act in the US, with some critics branding their kind-of-indie, kind-of-country, kind-of-rock sound and Jeff Tweedy’s subtle, highbrow lyrics and subject matter as ‘the American Radiohead’, comparing the two groups’ abilities to produce stylistically diverse albums without seeming to ever change their formula too much. Star Wars, their (possibly lawsuit-inducingly titled) ninth album, appeared suddenly as a free download in mid-July, marking their longest wait between studio LPs in their career, the first since 2011’s The Whole Love.

With the exception of one five minute track, all of the rest are under three minutes in length, and the sound is notably unpolished, even for Wilco, a group that has always liked you to hear the rough edges of their work. Nels Cline’s guitar work sounds as if it’s been recorded first time out and then heavily treated in the studio by people who are just discovering what all the buttons and dials do for the first time. All manner of pedal effects and production gimmicks clatter and bang all over the mix, with little regard to what they do to the songs, and the whole thing comes across as extremely casual, unguarded and maybe even naïve. If you thought that an album of three-minute-long songs would see Wilco being more direct, think again: if anything, Star Wars is an even more abstract iteration of their intelligent take on Americana.

Opening with the minute-long guitar skronking of ‘EKG’, we know that we’re in for a stranger experience than on the average Wilco record, but it’s not necessarily the subject matter but the manner in which its delivered that makes for the challenge. The shambling anthem of ‘More…’ attempts to dress itself smartly but fails, and eventually cedes to a roar of fuzz. ‘Where Do I Begin’ commences with a clear strumming of electric guitar, but then succumbs to a hailstorm of drums and detuned guitars that emerges out of nowhere in the final minute. Tweedy is used to playing around with form and substance, but the final result isn’t as coherent as normal. The scuffed alt-country of ‘The Joke Explained’ and the unusually clean (by contrast) ‘Random Name Generator’ are the undisputed highlights in a record populated by oddities, nick-nacks and curios like ‘Picked Ginger’ and the shaky drone of ‘You Satellite’. It’s charming, in its own way, but as a whole package Star Wars is rather half-finished, not up to Wilco’s extremely high standards.

Other positive moments are ‘Taste The Ceiling’, which has the same kind of low-key drama as the delicious ‘War On War’ from 2002’s all-time classic Yankee Hotel Foxtrot, and syncopated feel of ‘King Of You’. The downbeat and moody closer ‘Magnetized’ comes across as a piece of soundtrack work more than anything else, and ends the album in a distinctly unresolved mood. With this very ramshackle and impromptu feel, like a series of first takes stitched together, Star Wars sounds like a band clearing its throat. Like the rest of their back catalogue, it scans as belonging to the rock genre, but without any of the macho chest-puffing and posturing that often entails. It’s an unusual piece of work, and will likely go down as a curious footnote in Wilco’s impressive discography, begging the question ‘what can we expect from them next?’ (6/10)