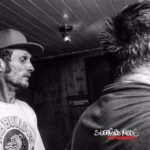 One of the unlikeliest sensations of the decade so far has been Sleaford Mods, a duo consisting of instrumentalist Andrew Fearn and lyricist / polemicist Jason Williamson. Live, they’re one of the most talked-about British groups in years, with an entirely minimalist set-up. Take their recent Glastonbury performance: Fearn plays a pre-recorded track on his laptop and sips from a can of lager, while Williamson does all the heavy lifting, reeling off his dense streams of consciousness. They outrageously subvert the expectation of a live performance, but the effect is nevertheless compelling. Lyrically, the obvious comparisons are with John Cooper Clarke, only Williamson actively seethes with rage, rather than with the Mancunian’s caustic resignation.

Traditionally, acts with this kind of obvious live appeal find it difficult to translate that chemistry into the context of a record, but Sleaford Mods transpose their message with consummate ease. Key Markets is their eighth album including the short mixtapes at the start of their career in 2007, a phrase with a double meaning (it was a market where Williamson’s mum used to shop, as well as a knowing nod to the increasingly demographically-focussed British music industry), a refreshing, authentic blast from the British streets and one that will undoubtedly build upon their unlikely success and make them even more widely known. Here, Williamson takes aim at fakers, hipsters, careerist left-wing politicians and many other minor irritants about modern life, and while his lyrics often take the form of entertaining non-sequiturs. To paraphrase Mark ‘E’ Everett, Sleaford Mods find life funny, but not ‘ha-ha’ funny.

The first noise on the album is a clip of one of their own gigs, with the audience chanting “SLEAFORD MODS!” to the tune of the Quadrophenia ‘we are the mods!’ anthem. Not only does it plug you right into the live atmosphere in which they’re most comfortable, but it flags up the sonic heritage in which they want to place themselves. Indeed, Andrew Fearn’s skeletal, frantic musical backdrops sound like a kind of ersatz, reconstructed version of mod or punk, as if done by memory using only beats and bass guitar. That stroppy, tightly wound amphetamine rush provides the fuel for Williamson’s tirades. Key Markets rushes out of the traps, with the first half a dozen tracks rushing by in a blaze of pent-up energy. The impressively sweary ‘Bronx In A Six’ sees him have a go at Lauren Laverne and shoe horn a vintage reference to the Jack White / Von Bondies punch-up from over a decade ago into the mix. . Lead single ‘No One’s Bothered’ eschews the Mods’ traditional streamlined formula, sounding more like (whisper it!) an actual song.

Politically, much has been made of the targets in question, with both Nick Clegg and Ed Miliband having resigned from office between the album’s recording and release. Williamson has justified it on the basis that although the people are different, the system remains the same. Indeed, with all the hysteria over the Labour leadership and one of the candidates having the sheer gall to follow his principles rather than focus groups, lyrics like “Is it right to analyze in a general sense the capital machine, its workings and what they mean? / Passive articles on political debate, its implications are fucking meaningless, mate” on the dole queue tale of ‘Face To Faces’ are easily relatable.

On ‘In Quiet Streets’, among amusing plays on words like “eu-ca-lyptus? You can fuck off!” he comes out with a diagnosis of our national spiritual malaise (“we put our souls in nursery for the day, pick ‘em up after work / take ‘em home and try to get them in bed before 10”). Williamson bemoans the middle class domination of music, of regular people being priced out of playing instruments (“music’s for people with a bit of extra money mate” – ‘Cunt Make It Up’). Key Markets wobbles slightly in the second half, but there’s enough moments like the disjointed rhythms of ‘Arabia’ and the delirious nonsense of ‘Giddy On The Ciggies’ to see the whole thing through without losing the attention of the listener.

The chemistry is well honed after years of collaboration, but there’s little sign of complacency – indeed, Williamson snarls every syllable like it’s his last, like somebody’s holding a gun to his head. Key Markets is aggressive, for sure, but they don’t forget to make it relatable and approachable – greater than mere ‘fuck everything’ nihilism, they advocate a positivity, of reclaiming the soul against outside forces that want to claim it from you. You don’t need to be smart, you just need a healthy disrespect for your supposed societal betters and the eyes and ears to spot fakery. Sleaford Mods are accountable to absolutely nobody, and that’s what makes them so compelling – they’re not ‘voices of the people’ like Billy Bragg and they don’t want to be, having more in common with heckling and sniping from the sidelines of early Clash, and they genuinely don’t give a fuck about what anybody thinks of them. With each album, they’re becoming their own little sovereign state within the soulless, merciless profit-driven ‘plc’ of the United Kingdom in 2015. (7/10)