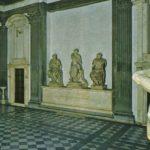 Ducktails is the side project that Real Estate guitarist Matt Mondanile operates in tandem with his duties in that group. Over the course of six years and four albums, it’s expanded from his solo recording outlet to a four-piece group signed to Domino, one of the most prestigious indies in the business. Just like the New Jersey three-piece that is fast becoming one of the most essential American indie bands in recent memory, Ducktails deals in hypnagogic pop, aimed at vividly recreating that temporary state between wakefulness and sleep where the mind drifts and follows its own internalised logic. Their concise last album The Flower Lane (2013), combined with Real Estate’s rising stock, brought them to wider attention, and fifth record St. Catherine has put Mondanile in a position to promote his own songwriting on a national level.

The pretty opening instrumental ‘The Disney Afternoon’ is a concise summation of everything Ducktails is about: hazy dreamscapes pricked with gentle electric guitar. Emotionally, Mondanile seems to stick to the same kind of anxious subject matter of his main band, putting everything on the line in the forlorn opening couplet “nothing less and nothing more / don’t know what else to do” in the title track. Wishing to revert to a childlike state of innocence but knowing that can never happen is a crucial part of both Real Estate’s and Ducktails’ chemistry, and that tension comes across pretty effectively on St. Catherine. The group’s name is a play on a kids’ cartoon, for God’s sake. Keyboard-swept album highlight ‘Heaven’s Room’ and the perkier moments such as ‘Surreal Exposure’ balance nicely with the wiggy, Mac DeMarco-esque guitars on the wistful ‘Headbanging In The Mirror’, only the atmosphere is more serene on these tracks, rather than bubbling with the gnawing sense of responsibility on Real Estate’s work. The shifting bassline, echoing guitars and subtle rhythmical devices lingering in the background on ‘Medieval’ do the same thing.

There are some problems that present themselves over the course of the whole album, however. Ducktails’ music has the uniformly slow, undulating pace of Beach House, it lacks the clarity and brightness of that band’s guitar lines or any of sultriness of Victoria Legrand’s vocals. Mondanile’s rather modest and quiet vocals are not particularly prominent, often masked by the instrumentation, and sadly this prevents St. Catherine from as memorable as it should be. Julia Holter’s guest spot on ‘Church’ is totally unexceptional, for instance, and there are a few pleasant-but-functional moments like ‘Into The Sky’ and ‘The Laughing Woman’. While there are plenty of very neat ideas dotted around, but a lot of it comes across as overly abstract, without a real physical presence in the music to elevate to the heights of Ducktails’ last two records. Technically skilled, but something of a missed opportunity. (6/10)