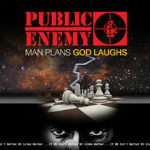 “We want to create a new standard for the over-50 rap acts” said Chuck D in a recent interview with Rolling Stone, speaking just after the surprise release of Public Enemy’s 13th album. As one of the most influential acts during the ‘golden age’ of hip-hop in the late ‘80s, Chuck, Flavor Flav and Professor Griff have been raging against the machine for much, much longer than they or anybody else could possibly have anticipated back then. Earlier in 2015, their seminal third album Fear Of A Black Planet passed the quarter of a century landmark, and their sound and image has had a strong bearing on any politicised hip-hop ever since, but very Public Enemy fans would argue that group has come anywhere close to making something as brilliant since. The surprise success of 2007 single ‘Harder Than You Think’, when re-activated during the 2012 Paralympics, has at least given them a platform of exposure from which to operate.

With Man Plans God Laughs, Public Enemy have chosen to speak again at a time when their message is arguably needed more than ever. With multiple police slayings of black suspects emerging from America throughout the last 12 months, their fury is as appropriate now as it was 30 years ago. However, PE don’t particularly try to lead the way here, instead attempting to fall into the slipstream of modern hip-hop’s prime movers – Kendrick Lamar, Run The Jewels and the sonic abrasiveness of Kanye’s Yeezus, all of which Chuck D cited as the group’s inspirations here. On the album’s first half, there is something of the tag-team feel of RTJ’s Killer Mike and El-P between Flav and Chuck as they toss the mic back and forth. ‘No Sympathy From The Devil’ and the title track the classic PE funk breakbeat with a digital clarity, as Chuck rages about governmental and societal violence.

This vibe continues throughout the first half, whereupon MPGL neatly divides into a different record, one more familiar to long-term Public Enemy fans. ‘Corplantationopoly’ is an aggressive takedown on modern predatory capitalism set to hard funk, while ‘Lost In Space Music’ revives the old formula of splintered noise samples. However, this part of the album is where it begins to run out of puff. ‘Honky Talk Rules’ is a low-key number that samples the Stones’ ‘Honky Tonk Women’ to middling effect. Closer ‘Praise The Loud’ is an unbelievably cheeky piece of self-reference, sampling the same crowd noises and hype MC-ing heard in the live interludes on PE’s own 1987 masterpiece It Takes A Nation Of Millions To Hold Us Back.

Their message is occasionally blunt, but that was always part of their appeal in the first place, but the main element that’s lacking in comparison to their heyday is impact: MPGL simply doesn’t grab you by the scruff of the neck like their first five albums did, and doesn’t try to convert you to their cause, assuming that you’d be on their side anyway. That soapbox element was always their calling card, and often you feel short-changed by the lack of urgency. However, these 11 tracks, of which only two last longer than three minutes, do benefit from being short, jabbing you in the ribs rather than smacking you upside the head. The whole album clocks in at less than half an hour, making it sometimes feel more like a slogan rather than a sermon. As such, it’s very far away from being the game changer that Chuck D would like it to be, but it does at least confirm there’s still a place for Public Enemy in 2015. (5/10)