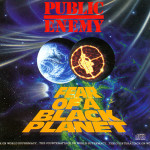 Front cover of ‘Fear Of A Black Planet’

The late eighties saw a couple of seismic events that had same sort of effect on rap that punk had on rock music: those events were N.W.A. and Public Enemy. Just like the brutal basicness of punk’s dictates, these two groups left a profound sonic legacy upon the nascent rap scene that changed it forever. But if N.W.A. were The Sex Pistols in this analogy – with their in-your-face aggression and almost cartoonish lyrical and musical style designed to frighten parents and conservatives – then Public Enemy were The Clash. Just as confrontational as Dr Dre’s crew, but definitely more complex and subtle in deploying that attitude, their second album It Takes A Nation Of Millions To Hold Us Back made them the most critically acclaimed groups in the world. “Most people were saying that rap music was noise,” their production team The Bomb Squad said in 1989 to Rolling Stone of their abrasive sound, “and we decided ‘If they think it’s noise, let’s show them noise’.”

But commercial success still eluded them. That was, until, director Spike Lee hired Public Enemy to record a song for his movie Do The Right Thing, which would become their signature tune: ‘Fight The Power’. A musical middle finger to authority, soaked in iconoclasm and vitriol, it was the inspiration for third album Fear Of A Black Planet, the record which would give them world domination. Unfortunately for the group, the American public had been distracted from their talents by the fallout of Professor Griff’s dismissal following anti-Semitic comments he had made the previous year, and the clumsiness with which Chuck D had handled the incident subsequently – reference to it is made in ‘Welcome To The Terrordome’. After that furore ebbed away and the group had reunited after very briefly disbanding, the thing that nobody could dispute was that FOABP was another masterpiece. Along with its predecessor, and other late eighties ‘golden age’ hip-hop icons like 3 Feet High And Rising, Paul’s Boutique and People’s Instinctive Travels AndThe Paths Of Rhythm, it’s one of the very best records of its genre, dating from a time when artists could still legally make such sample-dense records (before the 1991 Biz Markie lawsuit). It’s a wild, swirling, densely layered album, touching upon all sorts of black pop musical traditions with barely a pause for breath. Hard funk, soulful grooves, cool Motown horns, dub reggae, breakbeat… all swooping and dive-bombing around in the mix.

It’s hard to know where to start with an album of such riches, where the variety and depth of the sonic tapestries is arguably even larger than on Millions…, but let’s try. Flavor Flav’s seething condemnation of New York’s police on ‘911 Is A Joke’ still resonates today, as do the twin anti-censorship pieces ‘Anti-Nigger Machine’ and ‘Who Stole The Soul?’. The Bomb Squad helped to build Public Enemy’s sound out of microscopic sonic building blocks, shards of disparate sound making a coherent whole, like a collage of individual photographs making a portrait of a face when you zoom out and look at the whole. The loungey funk of ‘Pollywannacracka’, an analysis of prostitution, is built from many more component parts than it first lets on, and the aforementioned ‘Fight The Power’ features more than a dozen individual samples carefully placed and sculpted into a coherent whole, underlaid by its irresistible groove. It was a living art piece, shifting from one song, one verse, one second to the next, helping the mainstream to see hip-hop as a valid art form rather than novelty.

‘Incident At 66.6 FM’ is a sample of outraged and offensive call-ins from when Chuck D was a guest on a political radio talk show, setting up an ‘us against the world’ mentality early on, something repeated in Terminator X’s mini-showcase ‘Leave This Off Your Fuckin’ Charts’. ‘Burn Hollywood Burn’ was set to cool horns and was an attack on the one-sided portrayal of black urban life in popular movies of the time, something that dovetailed with their involvement with Do The Right Thing. It wouldn’t be a Public Enemy record without some controversy, though. Chuck D gets into trouble with the rather distasteful flirt with homophobia on the sub-minute skit ‘Meet The G That Killed Me’, but ‘Revolutionary Generation’ is a forward-thinking treatise on behalf of women. On the whole, the record’s influence was immediate and beneficial – black consciousness became the subject matter that occupied the minds of lots of subsequent acts, like X-Clan, Rage Against The Machine, Wu-Tang Clan and Mobb Deep, and this was in stark contrast to the say-nothing party jams of Jazzy Jeff that the world had been buying beforehand.

Chuck D’s flows and animated invective are still some of the most compelling in rap history. The beneficiary of a thorough education by his civil rights activist parents, Chuck’s ability to analyse societal power structures, to scrutinise and condemn while doing so using memorable slogans, is the other key element that explains why FOABP and Millions… are still so revered more than a quarter of a century later. Little pieces of black history wrapped up into miniature EMP blasts of sound, frightening to the uninitiated, but impossible to ignore. Artists as diverse as Ian Brown, Björk and The Chemical Brothers name-dropped it or sought musical inspiration from it during the ‘90s, and releases in the ‘10s by Kanye West, Drake and Kendrick Lamar are impossible to view outside of the context of its legacy. That and their live shows, whose confrontational black power theatre shocked, thrilled and generally divided American audiences – Flav and Chuck prowling the stage spitting venom, while the S1Ws mimicked combat exercises in the background. When you listen to Fear Of A Black Planet, you’re not just listening to a record: it’s a manual, a call-to-arms, a message.

Listen to Fear Of A Black Planet in full here!