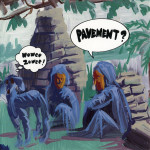 The initially unloved Wowee Zowee’s twenty year journey to being considered a masterpiece is a curious thing to consider. Possibly because it had to live up to the astronomical expectations built up by its predecessors Slanted And Enchanted (1992) and Crooked Rain, Crooked Rain (1994), which had seen Pavement hailed in some quarters as the new Nirvana, the next great hope for American alternative rock. Songs like ‘Gold Soundz’ and ‘Cut Your Hair’ had been serious college radio hits, CR2 had sold steadily into five figures, and the music press was predicting that Pavement would cross over into the mainstream with their next record. While that didn’t happen, Wowee Zowee is arguably the most Pavement-y record they ever made, the one that consolidated their reputation as underground legends.

The immediate reaction to its release shows that, quite often, indie fans are capable of small-mindedness, despite their nominally “underground” and “independent” ethos. Sure, Wowee Zowee was different, even difficult, but never directionless. But according those around at the time, people really hated it – but why? Almost certainly, it’s because its sprawling 18-song structure, experimental variety and generally aloof, uneasy attitude must have seemed like a disjointed and illogical follow-up to the art-punk of Slanted and the heavenly melodic rush of CR2. That, and 1995 was filled with great, more accessible alternative rock records like Alien Lanes, The Bends, Electr-O-Pura and To Bring You My Love that made people pass over this record that demanded patience.

But with the passage of time and the relatively conformist nature of their next two albums, its rough edges and joyous abandon became hailed by those same critics as the fullest artistic statement that Pavement and its leader Stephen Malkmus ever made. Boasting a volatile mixture of ballads, blues, lackadaisical indie rock and punk-y song sketches all rubbing up against each other, and sometimes in the same song, Wowee Zowee is a musical mosaic in the vein of ‘The White Album’. Even the more immediate fan-pleasers were loping, disjointed anthems, like ‘Grounded’ and ‘Black Out’, which had no hope of getting anywhere near the radio. But this was Pavement’s success – subverting the expectations of the listener. It’s the kind of an album that an artist makes to regain control of their own identity and destiny.

The back-to-back mid-album duo of ‘Extradition’ and ‘Best Friend’s Arm’ feel like half-finished demo takes, the sound of a band embracing the joys of experimentation (or maybe just pissing about). This was exactly the reason why the album was panned on release, but is so loved now. As Pitchfork pointed out, fans might have realised later on that Malkmus wasn’t just horsing around, but casting around for a new musical lexicon in which to express himself. Certainly when compared to the strait-laced Brighten The Corners released two years later, people could see the album in a different light. He was in as fine lyrical form as ever – weird couplets like “maybe someone’s coming to save me / my heart is made of gravy” on ’AT & T’ – but he hadn’t mixed that with this kind of musical nonchalance since Pavement’s very first EPs.

Wowee Zowee is full of this casual sketch-like work. ‘Grave Architecture’ and Scott Kannberg’s short closer ‘Western Homes’ sound like The Fall might have done if they’d been raised in sunny suburban California rather than grey, gritty Manchester. ‘Brinx Job’ sees Malkmus give a figurative middle finger to the expectations and pressure they must have been feeling – “we got the money!” he hollers sarcastically. The chugging, minute-long ‘Flux=Rad’ features the same guitar sound and vocal delivery that Julian Casablancas would steal for The Strokes’ 2006 single ‘Juicebox’. The six-minute blowout ‘Half A Canyon’ kicks off with the most delicious of blues riffs before moving off into improvised territory. Lead single ‘Rattled By The Rush’ is a weird delight, though it could have been an offcut from either of their first two records with its anti-guitar solo and harmonica duel.

Of course there were friendlier aspects of Wowee Zowee, even the likes of the fuzzy indie ballad ‘AT & T’ felt unpolished and rough. The beautiful countrified drama of ‘Father To A Sister Of Thought’ is a quirky highlight – the moment when the lap-steel pedal guitar kicks in is spine-tingling – though it was released as a single ahead of the more obvious ‘Grounded’. The spacey acoustic opener ‘We Dance’ might even have passed for Pink Floyd, immediately signifying to the listener that this was going to be a lot less focussed than expected. What is surprising is how often these friendlier moments sit unexpectedly alongside the sub-2 minute stoner messabouts like ‘Brinx Job’ and ‘Serpentine Pad’, as if the tracklisting had been constructed completely at random.

Again, critics believed Pavement had shot themselves in the foot for this kind of thing, but its flaws have been re-appraised as being its strengths. Rock history is littered with examples of this kind – the first Ramones album, Weezer’s Pinkerton, pretty much everything Scott Walker did from 1975 onwards – but few seemed to matter as much at the time. Critical opinion concerning records with something at stake like this tends to travel in the opposite direction – Be Here Now and X&Y were both lauded to the heavens at first. This is what makes the history of Wowee Zowee so curious – rarely do all the critics and hipsters admit they were wrong in such volume!

It takes quite a lot of work to really get into, so it’s worth shelling out for the expanded reissue, entitled Wowee Zowee: Sordid Sentinels Edition, which includes their excellent 1996 EPs and all manner of off-cuts, live takes and compilation tracks. Or it’s on Spotify.