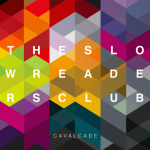 Manchester four-piece The Slow Readers Club are now on their second album, looking to break out and reach an audience outside of the city that loves them so much. Cavalcade is much more consistently down-beat fare than their 2011 debut. Judging by his lyrics, lead singer Aaron Starkie seems to be in a permanent state of Proustian lamentation for the lost days of carefree early adulthood. ‘Forever In Your Debt’, for example, goes “there was a time when all the world was golden” and ”it’s such an endless sorrow / it makes me cry it makes me wonder how we got to today when we’re all so afraid all the time”. Jesus mate. It’s themes of separation and (possible) redemption that occupy his mind, but unfortunately the music they’re set to is just too unchanging and by-the-numbers to linger long in the memory.

It’s on ‘Plant The Seed’ that you first suspect that Cavalcade is going to be a bit of a drag, the fourth similarly-paced grey monolith of guitars in a row, which means that Starkie’s vocals have to do a lot of the heavy lifting to make the tracks work from this point. His admittedly impressive baritone, pleasingly reminiscent of Phil Oakey and Interpol’s Paul Banks, is unfortunately not quite strong enough, and most of the rest of the album therefore fails to get out of second gear. The excruciating torpor of the title track is the worst offender, but the crime is averageness rather than laziness or sonic plagiarism. The blocky indie chords spliced with electro on ‘Fool For Your Philosophy’, which sees Starkie channel John Lydon on the brief refrain of “again and again and again”, is an accurate replication of another vocal style. The warm keyboard atmosphere ‘Here In The Hollow’ is a refreshing change in atmosphere that unfortunately arrives too late.

All of which is very frustrating, because when The Slow Readers Club are good, they really do have the chops to make you believe in their art. The compelling introspection on ‘I Saw A Ghost’ is a gothic highlight, and opener ‘Start Again’ is an industrious Kraftwerk-out of a rhythm. For all its faults, the record ends very strongly with the dramatic ‘Know The Day Will Come’, the pounding of the band bursting into a powerful climax as Starkie’s voice leaps into falsetto. And in fairness, Cavalcade contains a healthy number of brooding post-punk moments that are perfectly listenable in isolation, or as part of a wider genre playlist, and would sound great drifting across a festival field in the early afternoon as you’re off to see another band. But put all together, the twelve songs make for a rather, draining and disengaging experience. (5/10)