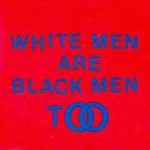 Front cover of ‘White Men Are Black Men Too’

Celebrated Edinburgh trio Young Fathers have wasted no time following up their Mercury Music Prize-winning album Dead. That album was a frequently disorientating assault on the senses, stuffed so full of competing elements that it demanding revisiting simply to take everything in. But, crucially, it had heart, something the likes of Flying Lotus or Everything Everything are sometimes accused of not having in their all-out rush to play around with their influences. For their second album, boasting the bizarre title White Men Are Black Men Too, Alloysious Massaquoi, ‘G’ Hastings and Kayus Bankole have wisely decided not to tinker with their formula too much, because there’s simply so much musical material to be mined in this rich seam they’ve discovered.

So what we get here is Dead plus, effectively, with all the same influences and mash-up tendencies, only this time turned up to eleven. It’s an album that almost wills itself to greatness, despite its notable flaws. More so than Dead, it’s very loud and quite difficult to listen to: on good speakers, quality headphones or even through a crap phone speaker, it’s a crackling wall of noise built from budget drum machines, homemade tape loops and crazed preacher-man lyrics. While it’s admittedly hard to discern individual elements, it’s as intoxicating as ever. The surrealism of their lyrics recalls Seattle’s art-hip-hop group Shabazz Palaces, while many critics have compared White Men…’s sound to that of early TV On The Radio, before they started to focus. This is a good comparison, insofar as both groups practically forced you to listen to them, so unusual did they sound.

From opener ‘Still Running’, the sonic battering rarely lets up, with discordant synth squeal and skronks diving and swooping like Public Enemy’s ‘Bring The Noise’ forced into a smaller space. The delirious, loping rhythm of ‘27’ is an irresistible body-mover as the lyrics taunt “you know it’s gonna haunt you in your sleep”. The group play with racial identity and class on ‘Old Rock N Roll’, “I’m tired of playing the good black / I’m tired of having to hold back” then invert it later in the song. The sinewy jungle of lead single ‘Shame’, set to filthy home-made drum loops, is a standout among standouts. Things are a little calmer with the dinky Metronomy-esque keyboard hook of ‘Rain Or Shine’, and ‘Get Started’ definitely has a spiritual feel to it. ‘Dare Me’ is a red herring of a track, starting off as a ballad-like thing before abruptly exploding with an almighty clatter.

White Men… is a triumph of total sensory overload, designed to uplift and unsettle the listener at the same time. The decayed atmosphere and fractious lyrical schizophrenia even recall the grimy homemade headspaces of Tricky’s masterpiece Maxinquaye, and that’s really all the praise that any record needs. There’s plenty of evidence here that Young Fathers will last well beyond the usual lifespan of some Mercury winners. (8/10)