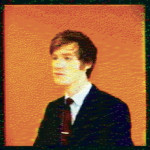 Front cover of ‘Culture Of Volume’

Last year, William Doyle aka East India Youth was plucked from the burgeoning and anonymous mass of Britain’s bedroom music makers and into the limelight when his debut album Total Strife Forever was nominated for the Mercury Music Prize. It was a record praised for its evocative qualities, of urban loneliness and atomisation, much like The xx’s debut which also gave the illusion of space through its economy. But while that record was abstract, something of a headphones album, Doyle’s next statement Culture Of Volume is an attempt at a pop breakout. Designed for much bigger, crowd-focussed spaces, its whole sound and ethos is a lot more immediate and brightly produced.

It’s difficult to detect which of the double-entendre meanings of the word ‘volume’ in the title that Doyle is attempting to analyse – volume as noise or volume as amount. Whereas TSF could have been a Gold Panda record if you wiped Doyle’s vocals from it, COV loses some coherence because it tries to spread itself a touch too thinly over more musical territory. Also, it doesn’t have the minimalist touch of its predecessor. A lone live performer, barricaded behind laptops and samplers and wielding a bass guitar, he works very hard to bring his bedroom symphonies to life, and that stage set-up is a suitable metaphor for what COV sounds like: all elements are placed to enshrine Doyle’s minor key, plaintive vocals in a very shiny production. It simply isn’t as special to listen to as his debut, where his vocals (if he sang it all) were just another instrument. The back-to-back ‘Beaming White’ and ‘Turn Away’ are perfectly pleasant Pet Shop Boys-esque pop songs but just aren’t that memorable. The centrepiece ‘Carousel’, a finely carved cavern of synth and swelling strings, would be much better without Doyle’s singing.

Having said that, there is at least something to please everybody on Culture Of Volume, and Doyle is at least attempting to find his own voice and be original, even if he isn’t always completely successful. The cinematic ‘End Result’ sounds pleasingly like a British M83, coming after the epic instrumental opener ‘The Juddering’. ‘Hearts That Never’ is a lovely piece of techno minimalism built from flickering chiptune electronics, and the ersatz Underworld banger ‘Entirety’ is also excellent. But songs like the ten-minute ‘Manner Of Words’, trying to meld post-dubstep with ‘10s arena indie, arrive to disrupt the natural flow of the record, which is a shame. Ultimately, you can’t help but feel as if Doyle is trying to please too many people and, as a consequence, is allowing his music to fall between two stools, not connecting with enough of his punches. It might be another addition to the vast pile of cultural clutter that he could have satirised with the record’s title, had he been a little cannier. (6/10)