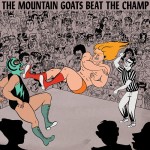 Front cover of ‘Beat The Champ’

Having been a proper ‘group’ for over a decade and a nom de plume for singer-songwriter John Darnielle for over two, The Mountain Goats are now on their fifteenth album. It’s a project that has long enjoyed a dedicated fanbase but has never really bothered the mainstream, and that’s unlikely to change with Beat The Champ. Not that that’s a bad thing, mind. For this album, Darnielle reminisces about his childhood fondness for professional wrestling and his troubled relationship with his stepfather (also a wrestling fan, and usually portrayed as an ambivalent character in previous Mountain Goats releases). In doing so, he uses a very specific subject as a platform to express wider truths and revelations, about things like death, loss, confusion and childhood memory, and it’s down to Darnielle’s great skill that it easily avoids the trap of being some dull ‘concept album’ and transcends its narrow inspiration to be so warm and relatable.

Beat The Champ is well stocked with examples of classic Darnielle lyrics, such as the opener ‘Southwestern Territory’, a mixture of tender piano and sax with the lyrics “drives his nose back into his brain / all the cheap seats go insane” an artfully absurd juxtaposition. ‘Foreign Object’ does the same kind of thing, a spry track with lyrical fantasies about stabbing enemies in the eye. He references his stepfather on the childlike reverie of ‘The Legend Of Chavo Guerrero’, a wrestler he used to idolise as a “hero of the downtrodden”. “You let me down, but Chavo never did / you called him names to try to get beneath my skin”, Darnielle sings in his vulnerable alto.

But more than that, Beat The Champ packs in a great deal of musical variety into its 46 minutes that reflects the weft and wend of Darnielle’s writing style. After the opening trio, phases of the album seem to arrive in groups of threes. ‘Animal Mask’ through ‘Heel Turn 2’ see him adopt his trademark busker-like style which won The Mountain Goats so many dedicated fans in the mid-noughties. The latter, however, drifts into a rather aimless piano outro. The next three tracks are have a jazzier, more discordant and unsettling atmosphere, including the impressive semi-spoken-word ‘Stabbed To Death Outside San Juan’, a retelling of the real life death of wrestler ‘Bruiser Brody’.

The final section is resplendent with Sufjan Stevens-esque alt-folk, including the quiet ‘Unmasked!’ which is an imagined speech from one wrestler to a defeated opponent, used as a metaphor for any number of other social encounters. It’s probably not the best thing they’ve ever done – that still belongs to 2006’s Get Lonely – but Beat The Champ shows that Darnielle and The Mountain Goats are as literate and affecting as ever they were. Long may it continue. (7/10)