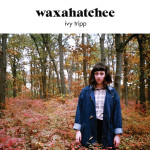 Since her 2012 debut American Weekend, Alabama-born New Yorker Katie Crutchfield has quietly become one of the most compelling solo performers of the new decade. The home-made acoustic qualities of that debut were electrified on the following year’s excellent Cerulean Salt, but until now Waxahatchee material has always been able to be performed with minimal help from others. Ivy Tripp is, by contrast, a lot less single-minded and significantly more varied in its ambitions, and in places this requires the use of other musicians. Happily, this does not mean that Crutchfield has had to compromise her artistic integrity or vision in any way – despite the fuller and richer sounds, it’s a clear sonic relation to her previous records.

Crutchfield has always been something of an old head on young shoulders. Not only does she seem aware of her situations, but is intelligent enough to appreciate the possible outcomes of all her actions, coming across as someone afraid of committing to a decision because the impact it will have not only for her but for others. This ambivalence comes across on ‘Air’, singing about an ex-partner “you were patiently giving me everything that I will ever need” – the listener is unsure whether she’s expressing regret or is relieved to have recaptured a sense of freedom to make her own mistakes. That aspect of her music is very much intact, but it’s the music that makes Ivy Tripp such an excellent progression. The contrast between the moody electronic opener ‘Breathless’ and next song ‘Under A Rock’, a winsome power-pop nugget made for radio that’s reminiscent of Alanis Morrisette, couldn’t be starker.

The homemade C86-feel of ‘La Loose’ is set to a rudimentary drum machine accompaniment, which is in keeping with Crutchfield’s whole approach up to this point but is a sensible progression. ‘Blue’ could have been made by PJ Harvey circa Stories From The City…, with just a dampened electric guitar to accompany her. But we also get fuller-sounding tracks with ‘The Dirt’ and ‘Poison’, which promise to see Crutchfield rope in a full band for the first time when she performs live. ‘Summer Of Love’ is like American Weekend, with its chunky ersatz folk feel, and the twinkling pianos of ‘Half Moon’, which see her stream-of-consciousness lyrics drift freely, uninhibited by meter or rhyme, are the absolute highlights in a largely enthralling record.

There is a brief dip in proceedings at about two-thirds of the way through the album, with the back-to-back presence of the directionless ‘<’ and the slightly forgettable twee of ‘Grey Hair’, not so much bad in themselves but more that they disrupt the flow of the whole. But when Crutchfield gets it right (as she does on 11 of the 13 tracks), the shapeshifting nature of the material is such a marvel to behold that it renders the criticism irrelevant. Ivy Tripp is the logical third step in her career to date, and maintains her reputation as one of the most impressive newcomers of the ‘10s. (8/10