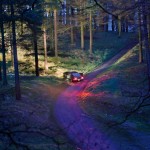 Drenge’s self-titled 2013 debut absolutely dripped with aggression and ennui. The Loveless brothers’ directed their boredom at their formative teenage years spent stuck in grey rural Derbyshire. But as impressive as that racket was, it risked pegging them as a one trick pony, as many similar bands in the recent past who have relied so much on stripped-down volume have struggled to project in other directions and on other levels. The addition of a third permanent member, Rob Graham, on bass This is what makes Undertow such an impressive sophomore effort: they have retained the moshpit-igniting raw power but they’ve laid down stronger roots in a variety of similar genres, like grunge, post-punk and drone rock. With Ross Orton on production (Arctic Monkeys’ powerful AM was one of his recent credits), Drenge sound like they’re ready for war, to take action where once there was apathy. They’re speaking the same language, but they’re communicating more.

After a short introduction track, you can detect the change immediately in ‘Running Wild’. There’s breadth and depth to their sound, like they’ve spread the same energy and force more evenly across more areas. This towering wall of noise suits Eoin Loveless’ weary, disaffected baritone superbly. ‘Never Awake’ recalls the restless grunge of Nirvana’s In Utero, as does closer ‘Have You Forgotten My Name?’, showing that Drenge are playing a more American-friendly style, with broader appeal, this time around. ‘Side By Side’ feels like a sped-up Warpaint song, building gradually into an almighty thrashing finale. They show this greater dimensionality when they lay off the volume on the likes of ‘The Woods’, something that just wasn’t present on their debut. But the most joyous and immediately satisfying moments are still associating with noise. The brilliant pyschobilly of ‘We Can Do What We Want’, as the Loveless brothers channel The Cramps and The Fall, and the muscular rhythm of ‘The Snake’ that hits you like a train, are Undertow’s highlights.

It’s not a rebirth, or a reinvention, or even a finesse that Drenge have given us, but the kind of sonic development that fans of rock groups used to take for granted between records, which satisfies existing fans but holds appeal for new listeners. It’s hard to remember when exactly bands stopped being so unambitious for their second albums, but what Drenge have done with Undertow is the kind of thing that’s sadly being lost, in British indie music in particular. “More of the same”, we seem to demand of second records, and then we pillory groups for being unable to develop properly from album three onwards. Undertow is a much better realised and subtler record than the full-on aggression of its predecessor, and sees Drenge take a significant step forwards in their development. (8/10)