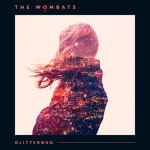 Listening back to The Wombats’ 2007 debut A Guide To Love, Loss & Desperation with the benefit of eight years of hindsight, it’s aged horribly. Granted, it did host a few big tracks which you could guarantee would be on at every shit student indie night – ‘Moving To New York’, ‘Kill The Director’ and their most well-known hit ‘Let’s Dance To Joy Division’ – but the appeal barely lasted past a second listen. Their 2011 follow-up This Modern Glitch (don’t worry, I couldn’t name any tracks from it either) somehow made its way to number three in the UK album charts. Four years after that, and they’re still stuck in 2007 – which is weird, as in 2007 they were already stuck in 2004. It was probably inevitable that they would soon conjure up a heavier electronic sound between The Feeling and Scouting For Girls. Glitterbug is that – an album by a band desperately clinging on to their stagnant sound, as well as their youth.

There is a consistent lack of invention straight across the album and it’s highly irritating. ‘Emoticons’, ‘Greek Tragedy’, ‘Sex And Question Marks’ and ‘Give Me A Try’ are distinctly average nods to The 1975 and Passion Pit, but ‘Pink Lemonade’ breaks the cheese-o-meter with this pearl of wisdom, by lead singer Matt Murphy: “I don’t wanna be the blinking rabbit to your wildebeest, the jaded lover to a sex machine”. Sigh. There’s a few more corkers to dwell on: “There is no greater sight than you in your underwear removing mine”; “Kiss me with your fist, it’s alright / wrap your hands around my throat, I won’t bite”. It’s not even that any one moment particularly offends more than any other, but Glitterbug has no high points or good aspects whatsoever.

With their overwhelmingly teenage fanbase now in their early twenties and (hopefully) having moved on to mature tastes, Glitterbug was always going to be a sink-or-swim moments for The Wombats and on this poor effort they are clinging on to their 15 minutes. The record relies on MOR references with the same distinct “humorous” edge that was teeth-grindingly punchable the first time. It’s not just lyrically where it goes wrong; it’s the plastic sound and will-this-do? delivery too. The electronic pop direction is predictable, forgettable and tired. (2/10)