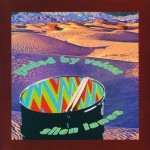 With their penchant for alcohol and short, sweet lo-fi songs, Dayton’s Guided By Voices are regarded as one of the defining underground bands of the ‘90s. Their unpretentious brand of hook-laden indie rock, compressed into minute-long song sketches, has captured the hearts of their small but utterly dedicated fanbase ever since their inception in the mid-‘80s. After nearly a decade of slogging, and having finally gained some nationwide attention the previous year with Bee Thousand, which appeared near the top of many critics’ lists of 1994, their label Matador decided to advance them nearly $100,000 – a mind-blowing investment for an indie imprint at the time. But GBV had no time for the attendant bullshit that comes with rock stardom, choosing to stick with their minimalist approach to recording and production for their eighth album and blowing the rest of their advance. Their biographer James Greer said “The cost for recording Alien Lanes, if you leave out the beer, was about ten dollars.”

Though that might sound like career sabotage, it meant that Alien Lanes was effectively a companion piece to Bee Thousand, rather than the fanbase-alienating, slickly-produced, almost certainly doomed attempt at national radio airplay that it might have been. Indeed, GBV’s fans associate the two records very closely in their minds, and not just because of the short temporal gap. Alien Lanes is both contemporary and timeless: punchy, catchy guitar pop stripped down to its bare essentials, channelling the glorious melodies of ‘60s British Invasion and ‘80s post-punk. The hiss and echo of the lo-fi production gives it the impression of some hastily thrown together demo tapes rather than a coherent album, but this sound perfectly complimented Robert Pollard’s songwriting style. With 28 tracks rattled through in just 41 minutes, his songs have the impression of little thumbnail sketches, doodled in boredom. The lack of between-track silence also gives the collection a live, improvised feel, as if you’re hearing the songs being created together for the first time before being discarded, never again to be played.

GBV were cited as a key influence on early material by The Strokes at the start of the new millennium – they covered Alien Lanes’ opening track ‘A Salty Salute’, and invited the group to star alongside them in a ‘Family Fortunes’-style video for their own single ‘Someday’. But GBV’s real musical legacy was Pollard’s compelling approach to songwriting, which had everything to do with the melodies of classic pop and rock but none of the surface sheen or conventional song structures. Pitchfork’s Eric Carr, declaring Alien Lanes to be the 27th best album of the decade in the publication’s ‘Best of the 1990s’ list, praised Pollard’s anti-star demeanour: “the most average guy in the world, blessed with the skills of a master songsmith and boundless imagination.” Like most of the rest of their catalogue, it’s a strange little curate’s egg of an album, but with a wealth of treasures there for those prepared to give it repeated listens.