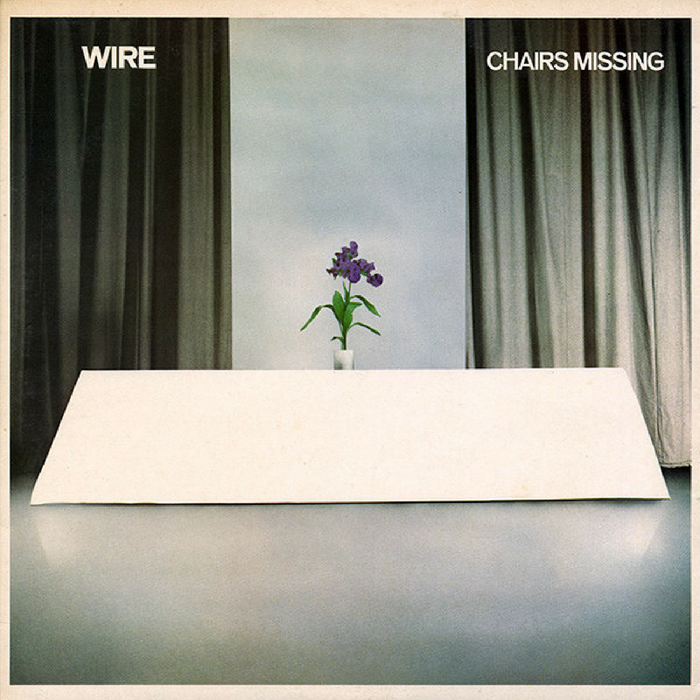 Restlessly creative and always a step removed from the original punk scene from which they originated, Wire were well ahead of the curve at the end of the 1970s, dealing in post-punk before the term had even been coined. In the closing three years of that revolutionary decade, they forged three cult classic albums in a searing blast of creativity which displayed more originality than most bands manage in an entire career. The second of those, Chairs Missing, arrived just eight months after their stark, fractured debut Pink Flag in August 1978.

It was a bold evolution of the stark, minimalist ideology they had laid down with their debut, an album so different from their punk colleagues in December 1977 that it came to point a way forwards for a movement and style that was collapsing in on itself. A month later, the Sex Pistols had acrimoniously split up, and punk was beginning to break out of its self-imposed back-to-basics approach and assume new, more complex forms. Alongside the more accessible stylings of new wave epitomised by the likes of Blondie on the other side of the Atlantic, British punk was becoming more angular and minimalist – Howard Devoto had quit his first band Buzzcocks and formed the splinter group Magazine, for instance. Having been at the vanguard of this process in 1977, Wire continued to be torch-bearers with Chairs Missing.

Compared to the whip-cracking pace of Pink Flag that made it seem almost improvised, its successor is feels more deliberate and calculated. Chairs Missing less purposefully fragmented: its tempos are slower, its production more detailed, notwithstanding the austere, jagged arrangements that make it unmistakably cut from the same kind of raw materials as Pink Flag. While its song structures are more developed than the brutally short, thumbnail sketches of its predecessor, producer Mike Thorne encouraged Wire to experiment with art-rock, also indulging in Eno-esque abstractions and injecting the band’s minimal post-punk soundscapes with electronics and synths to fill in the gaps in the mix. All of these things, by the way, were anathema to first-wave punk artists, who had deliberately eschewed the excesses associated with prog-rock and psychedelia. Even Wire had done so on Pink Flag, making Chairs Missing a significant ideological departure as well as a stylistic leap.

Images of cold, of drowning, of human pain and suffering are recurrent themes underpinning the record – not just in Colin Newman’s barked lyrics, but sonically too, something reflected in the album’s title itself (referring to mental chaos and disorder, the phrase being “his front room’s got a few chairs missing”). The art-rock ambience of ‘Marooned’, and the icy, spidery opener ‘Practice Makes Perfect’ shot through with billowing synths, are both perfect illustrations of the sonic shift and the general lyrical moodiness of Chairs Missing. Newman’s doleful intonation of “water gets warmer / iceberg gets smaller” on the former is typical of his cut-up, broken style that somehow gets right to the point. ‘Used To’ is one of the most artful moments on the record, despite being tucked away near the end. The soothing jets of ambient, treated guitars create a cocoon-like atmosphere that’s somehow both warm and chilly at the same time, while Newman croons gently about the pangs of nostalgia (“Does nausea ensue when you chance upon a memory / Of someone you used to know?”).

The diversity displayed in musical terms on Chairs Missing is a marvel to behold, even four decades later. The cheese-wire riffs of ‘Another The Letter’ combine with Roxy Music-esque synthesisers whizzing around the mix; the comparatively straightforward, almost straight-edge punkiness of ‘Sand In My Joints’; the post-modern closer ‘Too Late’ and the minimalism of ‘I Feel Mysterious Today’, in which Newman puts in a deliberately hammed-up vocal performance, are all evidence of the white-hot creativity that went into Chairs Missing.

Closing the first side of the album is ‘Heartbeat’, arguably Wire’s most emotionally affecting track. A breathlessly quiet pop song without a chorus, its stark bass-electronics combination settles into a pulsing, almost motorik groove and takes its time to go nowhere, but beautifully so. Opening side two, ‘Mercy’ presages a great deal of the tension/release dynamics of post-rock, building in stages into a progressively nasty storm of duelling guitars and drums. These two tracks alone, appearing consecutively in the running order but so different in construction and execution, show that Wire had already developed a much greater range than the already impressive one they had delivered on Pink Flag. Then there’s the doomy, reverberating bass underpinning ‘Being Sucked In Again’, a clear influence on the gothic majesty of The Cure’s bleakest records, and the gentler textures coaxed out of Gilbert’s guitars are heard on ‘French Film Blurred’ and the jittery ‘Men 2nd’.

However, amid the alienated, often brutalist sonic architecture of Chairs Missing lies Wire’s most commercially accessible moment of their catalogue. ‘Outdoor Miner’ is almost a flirtation with mainstream guitar pop – delicate, watery and melodic and boasting cascading vocal harmonies, alongside lyrics which, although they concern a fly larva, are deeply emotive. The “serpentine miner” burrowing through a leaf is under threat even as it struggles for life and freedom (“he lies on his side, is he trying to hide? / In fact it’s the earth, which he’s known since birth”), a great allegory for the counter-culture. Newman’s vocals hang the entire chorus on virtually a single note, and the whole thing sounds so throwaway, sunny and optimistic that you can hardly believe it came from a first-wave punk band. The superior 7” single version added some brilliant piano, and ‘Outdoor Miner’ could have been a genuine hit if Wire hadn’t been banned from ‘Top of the Pops’ under allegations of ‘chart hyping’ by EMI.

Following that is another of Wire’s most famous tracks, ‘I Am The Fly’, setting social outsider sentiments (“I am the fly in the ointment / I can spread more disease than the fleas which nibble away at your window display”) to Gilbert’s heavily distorted guitar. Non-album single ‘A Question Of Degree’, released in early 1979 but from the same sessions as Chairs Missing, clearly presages the new-wave revival of ‘00s bands like Franz Ferdinand.

As such, Chairs Missing had a huge impact on a whole range of sub-genres that arrived in the aftermath of the first wave of punk. Goth groups such as The Cure, Bauhaus and Siouxsie & The Banshees took their cues from the heavier end of it, while college rock acts like Pavement and R.E.M. (who covered Pink Flag‘s ‘Strange’ at one point) were inspired by the jangly clusters of melodies from the album’s lighter moments. Elastica, one of the leading lights of Britpop in the Nineties, were pretty obvious in their lionisation of Wire’s first two albums.

One more album was to come during Wire’s first iteration, the genuinely strange and challenging 154, in September 1979 before the group effectively seized up because of creative differences, with Gilbert and bassist Graham Lewis forming the short-lived Dome. However, it completely a holy trinity of Wire records that still have a huge resonance with forward-thinking indie and rock acts in 2018.

Listen to Chairs Missing by Wire here via Spotify, and tell us what you think below!