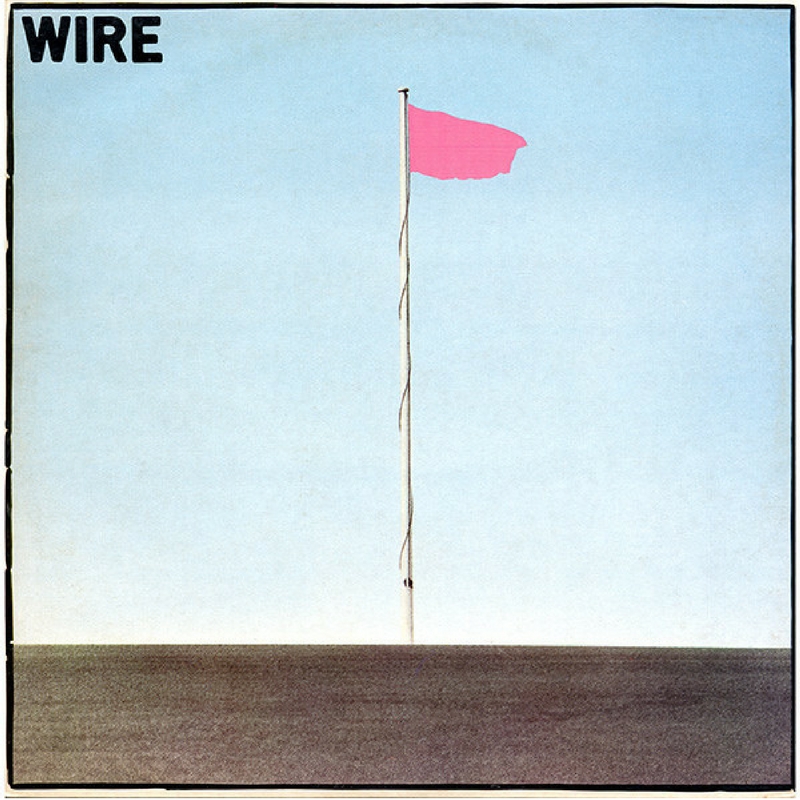 In the white-hot creative crucible that was 1977, punk was many things to many people, far more diverse and multi-faceted than the hysterical British tabloid headlines made it out to be. The three-chord approach that characterised so much of that year’s punk music was only ever just one new way of doing things. The attitude towards making art was always more important, and arguably, no British band personified this aspect of punk more perfectly than Wire, whose extraordinary debut album Pink Flag seemed to take the ‘Year Zero’ doctrine of punk’s artistic manifesto more seriously and literally than anybody else.

In their first iteration, spanning their debut and its two successors (1978’s Chairs Missing and 1979’s 154), Wire pushed back the boundaries not just of punk music, but also expanded the wider lexicon of rock music in general. Much of first-wave punk, for all its destructive ethos and its ideology of pushing the reset button on pop music, took its basest musical cues from 12-bar blues and early rock’n’roll. ‘Louie Louie’, The Stooges and psych-rock were its basic building blocks, and were staples of many a British punk band’s live set in ’76 and ’77.

Wire’s approach was far more art-school than this, and in Pink Flag they endeavoured to speak an entirely new musical language. With their sometimes sketch-like and often very short songs (six of the album’s 21 tracks last less than a minute), combined with diverse, richly detailed and atmospheric sounds and lyrics that often read more like mathematical equations or surrealist poetry, they challenged several of our most central and seemingly unshakeable assumptions of what popular music can do, in terms of structure and message.

This was a good thing, but also very timely. By the end of 1977, the leading lights of the punk movement were already expressing dissatisfaction and alienation with the scene. In this context, Pink Flag was a highly significant release, pointing the artistic way forwards for what would become known as ‘post-punk’, and inadvertently inventing many of the key aspects of American hardcore and post-hardcore scenes that would develop a few years later, spearheaded by bands like Black Flag, Minor Threat and Minutemen.

Lead singer and guitarist Colin Newman, guitarist Bruce Gilbert, bassist Graham Lewis and drummer Robert Grey formed Wire from the ashes of a North London-based group called Overload, ousting its previous leader George Gill in the process and striking out on their own.

Despite only having a basic grasp of their respective instruments, the group backed themselves to create original compositions simply by experimenting with ideas in a way that was dictated by that lack of experience and, inspired by seeing Ramones and the Buzzcocks live, decided to perform those songs live with the same energy as the punks.

Wire performed their first live gig at London’s then-famous punk venue the Roxy, mixing up their embryonic original compositions (heard in December on Pink Flag on record for the first time) with a handful of JJ Cale and Dave Clark Five covers. Things evolved quickly, with EMI’s progressive rock-based imprint Harvest snapping them up and placing them in the studio with rookie producer Mike Thorne, who helped them come up with the cold yet kinetic sound that characterised their first three albums.

Spanning brutally minimalistic punk, proto-hardcore, twisted power-pop and slower exercises in texture and dynamics – incredibly, with all 21 tracks squeezed into under 36 minutes – Pink Flag is very possibly the most original album release to come from the British punk scene in 1977.

Partly, this comes from Wire’s influences, which were rather more art-school than many of their peers. Where the likes of the Sex Pistols, The Jam and The Clash had a conventional, R&B and blues-orientated base of influences, Wire felt that approach to be too traditional. Instead, they absorbed German electronic music, early Pink Floyd and psychedelic Sixties garage-rock, but processed them in the way that a vulture treats a carcass – scavenging for essential bits and leaving the rest.

Wire was a consciously self-editing entity, almost Dadaist in the way its members ruthlessly checked themselves, cutting out anything extraneous and compelling themselves to subvert and experiment with traditional song structure. Don’t forget, this was at a time when a lot of their British punk contemporaries were emphasising maximalism in terms of volume and structure. Wire were raucous but unbelievably taut by comparison, with the atmosphere on much of Pink Flag coming across as tense to the point of snapping completely. The shorter songs used to anger their audiences in 1977, who would start jumping up and down only for the music to stop completely dead.

But this ruthless sonic and verbal economy was part of the entire point of Wire – literally everything is boiled down and reduced to its bare bones, with each track coming across with a striking singularity of purpose. Everything that is there is present for a reason, and not a single second is wasted as Newman barks and sneers his futurist, haiku-like lyrics, his band spasming and slashing behind him. It is raw and yet detached with an art-school insouciance that would influence a great deal of post-punkers.

The only moment in which they seem to indulge in anything approaching the histrionics of traditional rock music endings is the frenzied outro to title track ‘Pink Flag’, which sees them accelerate insanely only to implode amid some absurdly low, speaker-busting bass rumblings.

Pink Flag’s production is dense and claustrophobic, but the tracks themselves vary in pace and mood. Tracks like ‘Ex-Lion Tamer’, ‘The Commercial’ and ‘Start To Move’ are frenetic and bouncy, like most conventional punk music. What really set Wire apart was the clutch of slower, more subtle arrangements that sought to push the boundaries of what punk could sound like – ‘Three Girl Rhumba’ and ‘Reuters’ in particular are chugging and ominous, displaying a dynamic that most punk in 1977 didn’t have.

There are also many experiments with song structures. ‘Strange’ resembles The Velvet Underground, and the back-to-back duo of ‘Fragile’ and ‘Mannequin’ feature almost Beatles-esque vocal harmonising. The three-vocalist shouting match of ‘Surgeon’s Girl’ seems to be the nexus for all these ideas, sophisticated yet simple and fizzing with energy. ‘Field Day For The Sundays’ deconstructs the mentality of British red-top papers in just 28 seconds (“I want to be a target for the dailies so they can show / pictures of me with a nude on page three”).

Pink Flag throws a lot of ideas at the listener extremely quickly, simply out of necessity, making it a disorientating experience initially, but repeated listening makes it one of the most consistently rewarding and interesting collections to emerge from the first wave of punk acts. The modern-day shuffle function is practically designed for it.

Wire are an absolutely classic example of an act whose influence vastly outstrips their sales figures, such as The Velvet Underground, Ramones or Nick Drake. “We’re the most famous band you’ve never heard of,” lead singer Colin Newman remarked to Rolling Stone for their 40th anniversary earlier in 2017.

While sales figures were negligible, and nowhere near as successful as many of their punk contemporaries, Wire’s legacy as pioneering punk futurists was apparent very quickly. Ian MacKaye of Minor Threat and Fugazi has frequently sung their praises (Minor Threat covered ‘12XU’ for the iconic Dischord compilation in the early ‘80s); former Black Flag icon Henry Rollins is a devotee; Elastica practically owe their career to Wire, with many of the tracks from 1995’s Elastica bearing more than a passing resemblance to a handful of tracks from Pink Flag and its successor Chairs Missing.

Having split and reformed on a couple of occasions, Wire still continue to record and release with a youthful appetite and forward-looking ambition that belies their age and institutional grandeur. Their 16th studio album Silver/Lead was released in April 2017, and was their third record in under three years.

However, it is their original incarnation that bore the most interesting and original fruit as Wire evolved and then expired quickly, with Chairs Missing and 154 adding electronic textures and more fully-formed song ideas yet retaining that crucial intelligence and art-school edge. Four decades on from its release, Pink Flag stands as one of the best monuments to punk’s lasting lesson for pop music – the freedom to make up your own rules.

Listen to Pink Flag by Wire here via Spotify, and tell us what you think below!