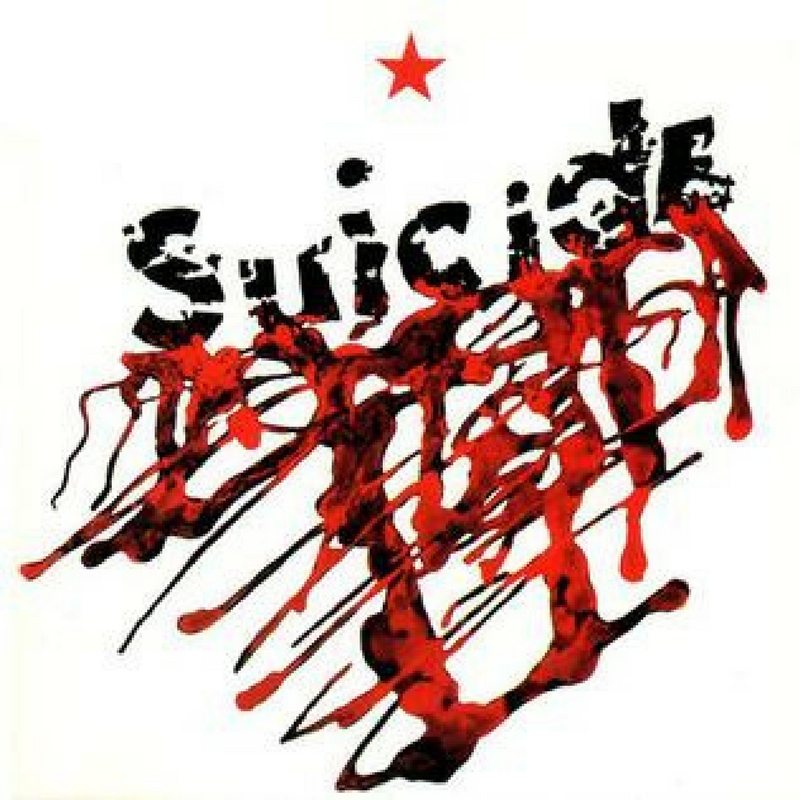 Influenced by: The Velvet Underground, The Stooges, David Bowie, Neu!, Can, Kraftwerk

Clinching proof that punk was about more than raw, over-driven guitars and blasted power chords, New York duo Suicide were rank outsiders even amongst a cohort that defined itself as being outside of mainstream society. Their debut album Suicide, released in the dying embers of 1977, manages to stand up as one of the quintessential American punk albums – up there with Television’s Marquee Moon, Patti Smith’s Horses and the first Ramones record – despite not a single note being played on a guitar.

In the context of a movement insisting on futurism, Suicide found their own space in the gaps between different styles, with only their attitude really connecting them with the rest of the punk scene. Utilising fragments of punk, post-punk and disco to creating their harsh, hypnotic sound, they became key progenitors of the scene that came to be known as ‘no-wave’, influencing noise-rock acts from Swans and Sonic Youth to The Jesus & Mary Chain and Nick Cave’s The Birthday Party.

Consisting of instrumentalist and musical technician Martin Rev and the strange, strangulated vocals of Alan Vega, Suicide sounded totally unlike anything else at the time. Without any of the typical rock accoutrements and totally committed to their confrontational performance artistry, they often provoked violent reactions in their bewildered audiences, with Vega frequently rushing offstage and crashing through tables in the audience to harass and confront inattentive onlookers.

Rev’s dense and disorientating electronics, consisting of a drum machine pounding out simple, short loops that sound like an idling motorcycle engine and a home-made synthesiser that alternates between claustrophobic stings, mesmerising organ chugs and twinkling beauty, providing the confrontational musical backdrop.

Sculptor and artist Alan Vega first met free-jazz musician Martin Rev at the New York Project of Living Artists, a workshop and art space in the SoHo area of the city in the early 1970s. Together and performing for nearly six years, Suicide became the first signing to be made by influential music figure Marty Thau (former manager of New York Dolls) to his own imprint Red Star, which became closely aligned with the city’s indie-punk scene in subsequent years.

Recorded in only four days at New York’s down-at-heel Ultima Studios with Craig Leon – who had recorded early records by fellow New Yorkers Blondie and Ramones – Suicide appeared in December 1977 and immediately stood out like a sore thumb even amid the thriving underground scene in New York. Here, the cleverer onlookers quickly realised, was a band that could walk what they talked.

In the live arena, Suicide were an absolutely fearsome prospect. Martin Rev’s pulsating drum machines and synthetic instrumentation used to shake and rattle the walls of the tiny dive bars in which they performed, to the point where their music was almost physically threatening. This is something you can hear in the bonus disc of reissues of this debut album, which contains six tracks recorded live at iconic East Village venue CBGB as well as the legendary performance dubbed 23 Minutes Over Brussels in which an angry and confused crowd, there to watch headline act Elvis Costello, jeered and bottled Suicide off the stage in June 1978 at the L’Ancienne Belgique ballroom.

For Suicide itself, this cacophony was dialled down, but the effect is no less impactful, its seven tracks throbbing with a tension that melts into the listener’s nervous system. Any attempt to replicate Suicide’s monstrous live sound on record would likely have failed, so this was an intelligent move by Thau and Leon.

The pulsating, motorik synth-punk of opener ‘Ghost Rider’ is one of Suicide’s two absolute stand-out tracks. In the context of the spiralling unemployment and inner-city violence of New York City, which seemed to be splitting apart at the seams of economic neglect in 1977, Rev’s muttered lyrics “America, America is killing its youth” were both a doom-laden prophesy and an urgent call to action. Later sampled for the careening chaos of M.I.A.’s ‘Born Free’ in 2010, ‘Ghost Rider’ is one of the all-time great punk tracks, confrontational in the same way as The Stooges and Andy Warhol, its appeal summed up by the absolute simplicity of its revving riff.

Time and time again, Suicide lent on tried-and-tested methods of rock and roll but tried to express them differently, punching out rock riffs on Rev’s twisted Farfisa organ as Vega gasped, yelped and screamed his echo-laden vocals in a sneering, detached manner reminiscent of a drug-addled, demented Elvis. Music journalist Simon Reynolds wrote that Rev and Vega “risked corn and trusted in the timeless power of cliché” on Suicide, but that their straight-faced sincerity and belief carried the day and freighted their music with lasting potency.

The same fundamental is repeated on numerous on Suicide’s seven tracks. The shimmering, stuttering noir-movie vibe of ‘Rocket U.S.A.’ is a much icier expression of punk’s nihilism, while ‘Johnny’ explores their latent ‘50s pop tendencies in bashing out a 12-bar blues rhythm by means of a rutting, squelching synthesiser. The re-issue’s two bonus tracks, ‘I Remember’ and ‘Keep Your Dreams’, also follow this basic pattern, augmenting the record itself.

The ten-minute album centrepiece ‘Frankie Teardrop’ is possibly the most blood-chilling piece of music ever committed to record. Described by one reviewer as ‘Taxi Driver: The Musical’, it tells the tale of a young, struggling and economically brutalised factory worker whose morale and patience snaps and causes him to murder his wife and baby, then kill himself. It doesn’t stop there, however, as the song follows its progenitor into the depths of hell, with Vega’s explosive screaming blasting out of the speakers in the context of the harrowing, tense restraint showed by Rev’s thumping, tell-tale-heart rhythm.

‘Frankie Teardrop’ is unparalleled in its stakes of bleak socio-political commentary, much more so than any of the surface-level sloganeering of their seemingly more radical punk contemporaries, as it gets to the horror of humanity and describes it in unflinching, literal fashion. It’s the kind of thing you would probably only listen to once in your life, but it will stay with you forever.

‘Che’, which follows it on side two to close the record, can’t help but feel tame by comparison, but its chilly, mechanised cello sound, counterpointed by Vega’s haunting vocals, makes for a suitably unsettling finale.

However, not everything on Suicide is so spectacularly grim; the album’s sole single ‘Cheree’ and the eerie ‘Girl’ counter the hard edges of the rest of the album with some shimmering, eerie but unmistakably beautiful sensuality, often reminiscent of the simplicity of ‘50s doo-wop and early rock’n’roll that Rev and Vega had bonded over when they first met – albeit affected by some seriously dark undercurrents. ‘Girl’, in particular, sounds like it might have come from some forgotten sexploitation movie.

Suicide’s keen spirit of inner-city nihilism and confrontational, dissonant anti-musicianship sparked the ‘no-wave’ movement of the early Eighties in New York, and later influencing English groups such as Depeche Mode, Primal Scream and Radiohead who professed their love for Rev and Vega. Even Bruce Springsteen has acknowledged the influence of the aforementioned ‘Frankie Teardrop’ on his own incredibly bleak 1982 album Nebraska, notably on songs like ‘State Trooper’.

However, for all the critical kudos that eventually flowed their way, Suicide’s own career progression stuttered and faltered in commercial terms, as they only released one more album in their original iteration, 1980’s similarly fantastic Suicide: Alan Vega And Martin Rev, whose bonus track ‘Dream Baby Dream’ became their absolute signature track in subsequent years.

Both Alan Vega and Martin Rev pursued solo careers in the early eighties before reforming for 1988’s A Way Of Life and 1992’s Why Be Blue, breaking up again soon afterwards before reunited for a final time with fifth album American Supreme in 2002, which was released on the prestigious indie imprint Mute, a kind of delayed recognition of Suicide’s enormous influence on independent music.

Listen to Suicide by Suicide here via Spotify, and tell us what you think below! 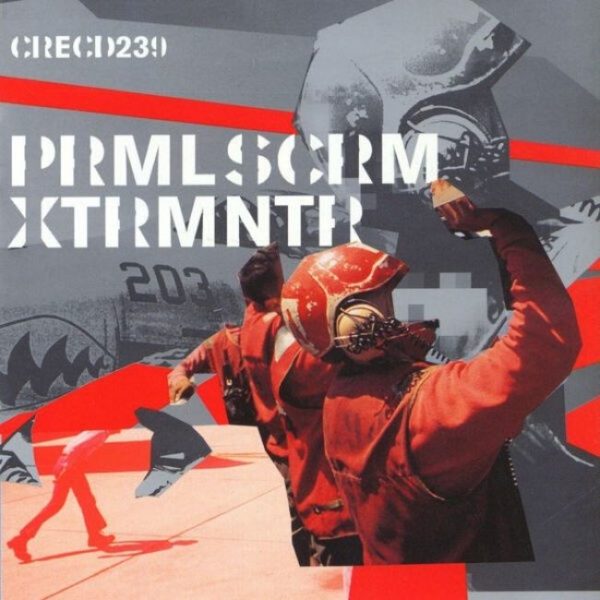 A skull-crushing onslaught of psych, krautrock, dub and post-punk enhanced…