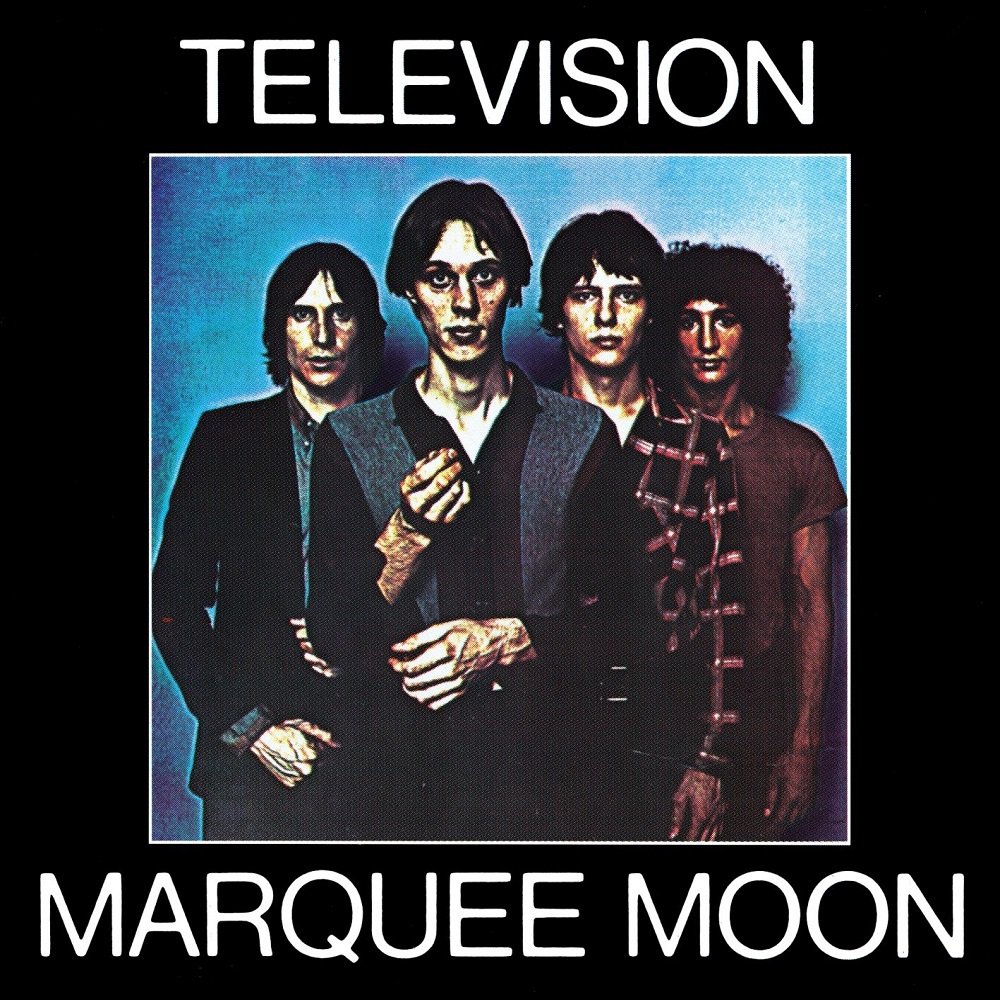 It’s testament to how quickly punk was evolving, even in 1977, when you consider how earth-shattering and advanced Marquee Moon, the long-awaited debut album by New York band Television, was when it was released in the second month of the year. Spindly, jazzy and improvisational at a time when their contemporaries were embracing power and simplicity, it is perhaps the clearest illustration that punk was a moveable feast – not just a sound, but an attitude or ethos whose principles could be applied to different disciplines.

Rather unexpectedly, it became a significant cult hit in Britain when released in early March, partly on the back of Nick Kent’s glowing review in the NME which called it an “inspired work of pure genius, a record finely in tune and sublimely arranged with a whole new slant on dynamics”. This at a time when the Sex Pistols’ album had yet to be released, remember!

Consisting of two immensely talented guitarists in Tom Verlaine, who also sang and wrote the lyrics, and Richard Lloyd, Television’s great innovation was to take the traditional blues tunings of rock ‘n’ roll completely out of the equation, creating something totally original in rock music and which was hard to categorise at the time. Just a year or so later, it would have been filed under ‘post-punk’, but it shows that even punk’s original progenitors were already thinking ahead.

In any case, the label of ‘punk’ always sat uneasily with the actual music Television produced and the image they projected when they performed live. As opposed to the haircuts, ripped jeans and leather jackets often associated with American punk at the time (see the front cover of Ramones’ 1976 self-titled debut…), they presented themselves modestly and let their music do the talking, embracing musicianship and technical skill at a time when guitar solos were being eschewed on ideological grounds. Marquee Moon did, however, share punk’s sense of white-hot creativity and invention.

Television had long been established in the New York punk scene, forming as far back as 1972 under the short-lived moniker of Neon Boys, and becoming one of the first acts to gain notoriety in the city’s embryonic punk scene that centred around CBGB, the bar and rock dive opened by Hilly Kristal in the East Village that same year.

The group’s original bassist, Richard Hell, had already departed long before they set about recording their debut, destined to form his own band, The Voidoids, and later The Heartbreakers with Johnny Thunders. He had been replaced by Fred Smith, who introduced Verlaine to sound engineer Andy Johns.

This proved to be a masterstroke, as Johns had the good sense to preserve the jazzy, freeform sound that Television had honed live. The great Brian Eno, freshly out of Roxy Music, had recorded demos of many of the songs in December 1974 that later appeared on the album, but Verlaine said they were “very cold and brittle”. Intent on having a large degree of involvement in the production process despite his lack of experience, Johns was an ideal match and the finished record finally got release on Elektra in February 1977.

Tom Verlaine’s impressionistic, imagery-laden lyrical style placed him in the same bracket of ‘punk-poetry’ as Patti Smith, whose debut Horses had come out more than a year before Marquee Moon, combined with the street smarts of fellow New York legend Lou Reed. Documenting his inner-city surroundings with a sideways glance and with a knack for detailing the absurd and strange, his lyrics are about alternative perceptions of events, and how context changes how situations look.

Consequently, Marquee Moon has a filmic quality, each of its eight songs a kind of urban nocturne detailing an abstract snapshot of grimy streets, dingy bars, cramped rooms and Bohemian decadence, yet finding spirituality and transcendence in those surroundings.

Opening with the churning, tumbling rhythms of ‘See No Evil’, it’s immediately obvious that Television are a serious musical force, in perfect lockstep with each other and more advanced than the vast majority of the bands that made up their scene. Verlaine and Lloyd may steal the headlines on Marquee Moon, but the rhythmic intensity of Fred Smith and drummer Billy Ficca provided an unshakeable musical foundation upon which they could perform, defining the boundaries of the music and keeping them disciplined.

The album’s 11-minute title track, throwing all of the punk rules out of the window, is a singularly stunning achievement of elliptical songwriting, on top of quite breathtaking musicianship. After a standard verse-chorus-verse structure, in which Verlaine delivers some of the album’s most memorable lyrical images (“I remember how the darkness doubled / I recalled lightning struck itself”), the band embarks on a seven-minute interlude in which Lloyd and Verlaine’s guitars effectively have a conversation with each other, the tension ebbing then rising to a cacophonous climax before burning itself out.

There’s no showing off of any kind on ‘Marquee Moon’, but the talent on display is phenomenal, Lloyd and Verlaine’s soloing more closely resembling the intuitive jazz adventuring of somebody like Miles Davis as opposed to the fretwankery of many ‘70s guitar bores. Although it subverts the punk playbook, such an attitude was itself ‘punk-esque’, squaring the circle of where the original punk bands were supposed to go next after quickly exhausting their three-chord manifesto.

Aside from that breathtaking centrepiece which would stand out in any album, Marquee Moon is filled with memorable moments and highlights. The atmosphere of edginess and danger whipped up in the opening salvo of ‘Friction’; the chiming melodies and counter-melodies intertwining in ‘Venus’; the sheer drama of ‘Elevation’ as its tense garage rock unfurls into something utterly cinematic and sweeping.

As Marquee Moon progresses, the pace gradually changes and the songs become less nervy and anxious but more reflective. The serene perfection of ‘Guiding Light’, which sounds exactly like you’d want a song called ‘Guiding Light’ to sound, arrives to show that Television could craft slower, emotionally resonant songs with the same intelligence as their faster ones. The stylish, stop-start ‘Prove It’ was an unusual but nevertheless successful choice for a single, piercing the UK Top 30. Closer ‘Torn Curtain’ opts entirely for drama as its progenitor appears to get lost in nostalgia (“holding back the tears / rolling back the years”). Not only is there not a bad song on the record, every single one seems to be a stand-out moment, memorable for either Verlaine’s lyrics or the music’s spidery structures.

Filled with avant-garde flourishes adorning twitchy garage rock, Marquee Moon quickly became regarded as one of the finest albums of the punk era. Despite Television’s lack of exposure in their own country and its music not particularly resembling that of their rivals, critics fell head over heels for it almost without exception. As the years went on, with post-punk evolving and the indie scenes on both sides of the Atlantic taking off in the ‘80s, the album became hailed as one of the key influences behind the alternative rock revolution.

Television themselves were unable to live up to the same dazzling standards they had set themselves, releasing a competent but noticeably unspectacular follow-up Adventure one year later. They split soon afterwards, reforming in the early nineties for one more self-titled album, released in 1992, and then again permanently in the early noughties for brief and irregular tours minus Richard Lloyd.

Like Slint’s 1991 masterpiece Spiderland or My Bloody Valentine’s Loveless, it is one of those incredibly rare records that completely re-marks the pitch that the game is played on, raising the bar for others and signalling that old ways of doing things will no longer be sufficient. Its wiry intensity informed a great deal of the underground scene in America in the early ‘80s that would become known as ‘college rock’ – R.E.M.’s sound, in particular, owes a debt to Marquee Moon. Alternative rocks guitarists, from The Edge to John Frusciante, took their cues from Lloyd and Verlaine’s intricate yet crisp and clear techniques.

Listen to Marquee Moon here via Spotify, and tell us what you think below!