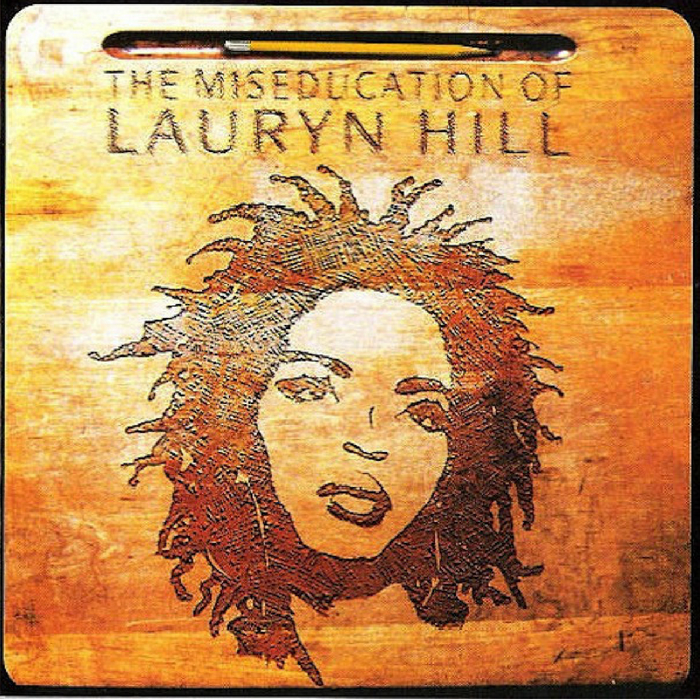 The first minute of The Miseducation Of Lauryn Hill eases us in with the familiarly shrill ring of a school bell, followed by the bustle of high school classroom. It’s almost as if Ms Lauryn Hill foresaw that her departure from Fugees would allow her to become a formidable teacher, and impart a sharp, percipient philosophy on a fast-paced genre that had begun to slow down by 1998. Her debut is an impressive spoken manifesto for young black women navigating self-worth, romance, and spirituality in a culture which opposes such things. It is no wonder, that 20 years on, it is pinpointed as a necessity for young woman and music fans alike.

On this album, Lauryn Hill walks us through her idea of what hip-hop is, her voice is laid on a docile soundscape which blend reggae, soul, and golden age hip-hop. She is starkly soft-spoken in comparison some of her female MC counterparts (Lil Kim for example) but she speaks in a confident, matter-of-fact tone which bears some semblance to Salt-N-Pepa’s preaching. Nas summarised Hill’s style as “Like the soul of Roberta Flack, the passion of Bob Marley, the essence of Aretha Franklin, Michael Jackson and the essence of hip-hop wrapped up in one thing”.

Although The Miseducation Of… is a fusion of many things, it’s strikingly minimalist in comparison to the braggadocio posturing, heavily processed and sampled beats that dominated the hip-hop scene in 1998. The album lightly buzzes, you hear musicians scratch against their instruments and tiny vocal fuzzes, all features which are usually erased by technology to ‘perfect’ the sound. But it is evident that Hill and her engineers put a lot of effort in crafting something that sounded organic and contained the thick, imperfect texture of vintage records.

READ MORE: The Top 200 Albums of the Nineties

Hill’s previous work within the disintegrated hip-hop trio Fugees had laid the groundwork for The Miseducation Of… to be a lightly political, socially conscious piece of hip-hop that critiqued the culture that surrounded Lauryn. In their first two albums, Blunted On Reality and The Score, the trio took on themes of disdain for commercialism and blank consciousness. In the most hip-hop fashion, the group teased that that they could use the same formula as ‘wack emcees’ but had the lyrical prowess and individuality to promote afro-centric, spiritual and righteous values. Lauryn’s MC capabilities were already a known quantity by the late Nineties, and her vocal dexterity had not only been displayed on singles ‘Ready Or Not’ and ‘Killing Me Softly’ but were critically acclaimed, surely at the front of the judges’ minds as she helped the trio win the 1997 Grammy for ‘Best R&B Performance by a Duo’. The fundamentals for Hill’s solo success had been laid down, yet somehow, Lauryn had not been given the chance for solo work. When Hill eventually did so, The Miseducation Of… came as a rebuttal to her record label and her former group, as both Pras Michel and Wyclef Jean had already produced their two solo projects.

Hill’s debut shows that she was a self-aware, young black woman who sought to navigate a stubborn, uncompromising music industry, but it also shows that she some hard-hitting knowledge to impart. Over the span of 77 minutes, Lauryn both sings and raps with clarity, and is succinct and easy to understand. She jumps from topic to topic, but is never disorganised. She approaches her lyricism with the organisation of an academic – in fact she says so in ‘Final Hour’ when she raps “Yo, I treat this like my thesis / Well-written topic, broken down into pieces”. Every song is a new piece of her argument, but they are all neatly threaded together with the overarching topic of love. Occasionally, a brief interlude concludes a song, taking us back to the bumbling classroom, where the students fumble to explain and understand what love really is. This feels intentional as if to pinpoint the child-like naivety many struggles with when navigating romance.

In fact, this makes ‘Doo Wop (That Thing)’ the perfect debut single, showing Hill’s flair for deciphering a love-driven culture. Instrumentally the song is strikingly upfront. From its onset, the ear is hit with a jangly piano loop, which is then followed by horns, bass, and punchy percussion, in the first five seconds of the song, the instrumental is rich, rhythmical, and funky. Her rapping on this track is frank, staccato, and hard, which gives the impression that she is imparting honest advice. Her lyrics are cautionary and catchy, her advice is multi-faceted, critiquing everything from self-esteem (“How you gonna win when you ain’t right within?”) to questionable conformity (“Showing off your ass cause you’re thinking it’s a trend / hair weaves like Europeans / Fake nails done by Koreans”).

She prompts young black people to adopt the consciousness she has, her words are timeless, as twenty years on the same trends persist. Hill’s wavering vocals are accompanied by nostalgic, barbershop quartet style harmonies which soften her lyrical frankness, and increase the whole songs rhythmic appeal. The track showed the core of hip-hop’s energy; sampling, storytelling, and soul, and unsurprisingly it became the first single by a rap artist to debut at the top of the Billboard Hot 100. Hill’s chart has success has meant that The Miseducation Of… has been considered as “the focal point at hip-hop’s crossover into the mainstream” (Rolling Stone, 2004).

The Miseducation Of… displayed Hill’s ingrained versatility, as she oscillated between delivering slick, witty raps full of candour, to delivering emotive, R’n’B ballads. For instance, both ‘Ex-Factor’ and ‘Lost Ones’ confront an indifferent lover, but ‘Ex-Factor’ is a smooth classic R’n’B composition. Hill sings in a gentle, girlish tone, on a textured bed of bass, guitar, synth, chattery birdsong and tinges of organ. Her rich, raspy belt channels a blend of resentment and longing, and she appears powerfully vulnerable and impassioned. Whereas on ‘Lost Ones’, Hill raps boisterously on a choppy boom-bap style beat. She labels her lover an oppressor and, in refusal to be vulnerable, she declares “My emancipation don’t fit your equation”.

Just as she did with the Fugees, Lauryn Hill also seamlessly reinterpreted classics, on ‘Forgive Them Father’ she covers Bob Marley’s ‘Concrete Jungle’. ‘Can’t Take My Eyes Off Of You’ is a mellow, bouncy take on Frankie Valli & The Four Seasons. As a musician, Hill demonstrated a clear awareness of the sound she wanted to create and how it she would reflect her philosophy beyond lyricism. She constructed a sound that was distinctively ‘Lauryn Hill’, yet characterised her respect for her predecessors.

Respectively, Hill pays dues to everything she believes makes her as she is, especially her faith in God. One thing that characterises her sound is her dedication to religion and spirituality, she states herself in ‘Everything Is Everything’ that her music is “[a] mixture/where hip-hop meets scripture”. The whole album is adorned with references to God, the New Testament, the Torah, and Egyptian Mythology. The track ‘Tell Him’ is a percussive, pounding slow burner, with entrancing, smooth choral back-up vocals, which is dedicated solely to God. On ‘To Zion’, Hill flips the idea that her first-born son is a scandal, instead delivering an ode to him that is unashamedly gospel in structure. Her voice sits on a soft drum roll and the enchanting guitar work of Santana, eventually the song crescendos into a single sharp, high note, as if to express that Zion, her son, has brought a unique joy and elation into the world. The song is beautifully candid and expresses to Hill that motherhood has brought a boundless, divine joy that can only be a blessing.

As a homage to her city, ‘Every Ghetto, Every City’ recounts Hill’s childhood with a euphoric and wistful gaze. Both the keyboard section and lyrics bear semblance to Stevie wonder’s ‘I Wish’. The song is a bouncy, jubilant and characterises another type of love Hill feels: appreciation.

Hill received widespread appreciation for her talents, in its first week in stores, The Miseducation Of… sold 422,600 copies. It later received ten Grammy nominations, and won five, one being the Album of the Year, making it the first hip-hop album to bring home the award show’s highest honour. Her album, alongside Erykah Badu’s 1997 debut Baduizm, is accredited producing a new incarnation of R’n’B; neo-soul, which revived classic soul, but incorporated elements of jazz, funk and afrobeat. The Miseducation Of… was succeeded with classics like Jill Scott’s Who Is Jill Scott? (2000) or India Arie’s Acoustic Soul (2001). Lauryn Hill received acclaim as a female artist who was uncompromising in her faith and beliefs, who had shattered a glass ceiling on her own merit, and produced, wrote, and arranged an entire album herself.

In 2001, these same solo credits in the album’s liner notes, became the topic of a 50-page lawsuit. A collective of four musicians known as New Ark claimed they had helped Hill compose the album, and that on two of the tracks they were primary songwriters. The suit eventually settled out of court for a reported $5 million. As years passed, Lauryn dealt with a variety of professional and personal issues which sent her into a reclusive state. To date, she has still never delivered a successor to her debut.

What made The Miseducation Of Lauryn Hill so radical is that there was not an expectation fame and fortune, the very fibre of the album denounces the romantic idea talent should be rewarded with wealth or fame in ‘Superstar’. It only makes sense Hill began to shy away from it. In her debut, Hill was striving for impact, inspiration, and education. Her touch is peppered over some of the most successful musical works of the past decade; her melodies have been interpolated into songs by the likes of J. Cole, Cardi B and Drake. The confessional, autobiographical song writing in ‘Lost Ones’, ‘When It Hurts So Bad’ and ‘Ex-Factor’ laid foundation for Beyoncé’s Lemonade or SZA’s debut Ctrl. It is safe to say in 2018, Ms Lauryn Hill has achieved the sonic legacy she strived for.

Listen to The Miseducation Of Lauryn Hill by Lauryn Hill here via Spotify, and tell us what you think below!