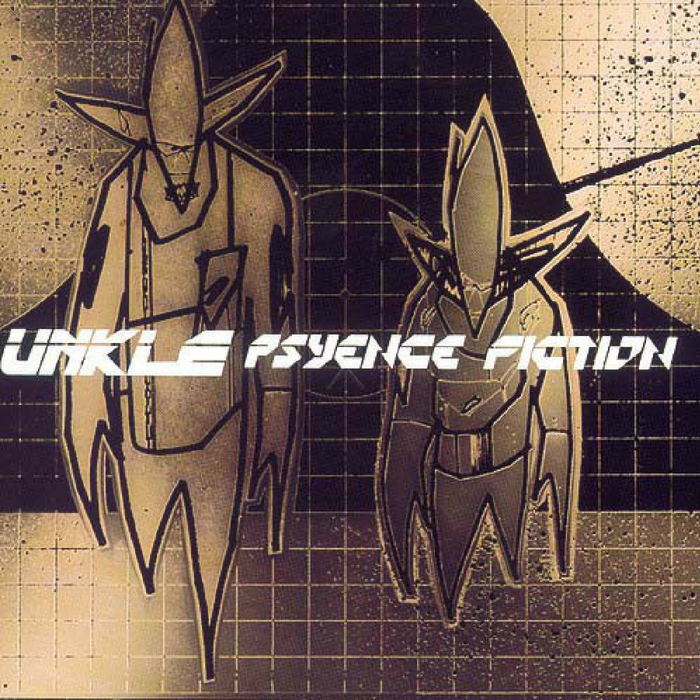 When Josh Davis released his first DJ Shadow album Endtroducing….. to rave reviews in late 1996, it was the pinnacle of a cultural movement: not just for Shadow, but also for the small British independent label Mo’Wax on which it was issued, which now had a reputation for being at the bleeding edge of trip-hop, turntablism and alternative hip-hop in the Nineties. To capitalise on its success and to bring the trend ever further into the mainstream, Mo’Wax boss James Lavelle decided to have a go himself, and took a new concept to his star signing, proposing a collaboration project with Shadow known as UNKLE that would attract the biggest names in indie and hip-hop.

Having been inspired to set up Mo’Wax to curate the kinds of jazz and breaks samples that informed the hip-hop he loved, you can see UNKLE as an extension of Lavelle’s business ethos. The outfit’s 1998 debut album Psyence Fiction filtered the pure cinematic hip-hop of Shadow’s Endtroducing….. through a much more mainstream prism, adjusting his aesthetic to fit the demands of a superstar-led collaboration project that had been conceived by Lavelle. A host of guest stars, from Radiohead’s Thom Yorke and The Verve’s Richard Ashcroft to Beastie Boys’ Mike D and rising soul singer Alice Temple, were roped in to broaden the project’s appeal to a less specialist audience.

Shadow and Lavelle conjure a musically diverse yet atmospherically consistent collection, that manages to collect everything from moody, jazz-inflected instrumentals and orchestrated epics to fragile acoustic interludes and thrash metal freakouts under one roof. Dark, eerie beats and ephemeral samples ranging from futuristic sounds to retro video-game noises remain from Endtroducing….., but now it was attached to distinctly commercial nous. Each star is allowed to play to their strengths, but none of them ever steal focus from the men behind the turntables.

Opening with a lethal one-two comprising the booming, ‘90s hip-hop collage of ‘Guns Blazing’, powered by Kool G Rap and Lateef The Truthspeaker’s flows, that’s reminiscent of Shadow’s solo work, followed by the louche, loose sample blow-out of ‘Unkle Main Title Theme’, Psyence Fiction is a richly rewarding listening experience, whose creators try to do something different with each track.

The chilly ‘Bloodstain’, featuring Alice Temple’s calm yet faintly menacing vocals, manages to sound completely all-encompassing, expanding to fill every space in your head, despite being very minimalist in construction. This secedes to the instrumental ‘Unreal’, the purest distillation of Shadow’s skills on Psyence Fiction and built on an excellent drum-break, lest the listener forget the real genius behind UNKLE. Mike D turns up on the more straightforward hip-hop ‘The Knock’, with rhyming that sounds just like his verbal acrobatics from that year’s Beastie Boys album Hello Nasty.

The neo-symphonic noir of ‘Lonely Soul’ is an absolutely transcendent epic. Shadow plays with the drum loop like a yo-yo on a string, while Richard Ashcroft, freshly departed from The Verve, delivers one of his most philosophical lyrics yet, about fearlessly treading into an unsure future. Later used on the closing credits of Danny Boyle’s The Beach, to soundtrack the backpacking community being cast out of their paradise, ‘Lonely Soul’ is the most perfect expression of the UNKLE project.

Thom Yorke’s stunning showstopper ‘Rabbit In Your Headlights’, which carries a vague sense of gnawing anxiety and distant threat with his blood-chilling mutterings about “Christian suburbanites”, carries a sense of other-worldly mysticism, even divinity (or devilry), that’s mainly down to Shadow and Lavelle’s musical backdrop.

It’s not all beats and samples, however, as the spectral acoustic interlude of ‘Chaos’, rendered by Atlantique Khan’s fragile, airy vocals, acts as an outlier. There’s also the sonic whirlwind of ‘Nursery Rhyme / Breather’ sees Badly Drawn Boy (aka Damon Gough) match his muttered vocals with Metallica’s Kirk Hammett, who lays down some frenetic guitar work. Both of these tracks don’t chime with the overarching sonic themes of Mo’Wax, but make complete sense in the context of Psyence Fiction. Only ‘Celestial Annihilation’ serves as a stumbling block for Psyence Fiction’s momentum, a slice of electro that’s entirely faithful to the genre’s origins and which isn’t pushed forward or played with in any way.

There were also hidden treats to be enjoyed on Psyence Fiction, depending on what region you purchased your copy of the album. On the US editions, there’s a secret hidden ‘track zero’ titled ‘Intro (Optional)’, accessed by rewinding from the beginning of ‘Guns Blazing’, that’s constructed from a head-spinning 67 samples. The instrumental ‘Unreal’ was paired with an equally moody vocal part from Ian Brown and re-titled ‘Be There’, and hit the UK Top 10 when released as a stand-alone single in early 1999. It’s an excellent track that can now accessed on all subsequent re-issues and streams.

Essentially, UNKLE was the marriage of Lavelle’s canny business sense, and his enthusiasm that comes from the keen, informed auteur, with the real magic and artistry of Josh Davis. Underneath the more fully fleshed-out songs, Psyence Fiction was actually pretty similar to Endtroducing….., keeping Shadow’s fanbase happy while also bridging a gap and reaching out to a mainstream rock/rap audience. Psyence Fiction was therefore able to reach an impressive no.4 in the UK Albums Chart when it was released at the end of August 1998 – no mean feat for a tiny British independent dealing in tasteful but largely obscure hip-hop breaks when up against a confident music industry at the height of the CD era.

Its studio-meets-real-life-stars concept presaged that of Damon Albarn and Jamie Hewlett’s Gorillaz by a couple of years. The moody, occasionally gloomy yet overwhelmingly playful atmosphere has also informed the work of the likes of Four Tet, Bonobo, Forest Swords, Gold Panda… basically any artists working in electronica seeking to make rich, textured music that takes risks yet still has cross-genre appeal.

With Shadow tapping out at the end of Psyence Fiction’s promotional cycle to focus on his own work, Lavelle has continued to operate UNKLE intermittently ever since. 2003’s merely decent Never, Never, Land was a much darker and less organic affair, with the human element that came from Shadow’s contributions notable by its absence. In truth Lavelle has never been able to bottle the lightning of Psyence Fiction in the same way, up to and including 2017’s respectable The Road: Part 1, but the project’s debut album stands as one of the era’s most entertaining time-pieces.

Listen to Psyence Fiction by UNKLE here via Spotify, and tell us what you think below!