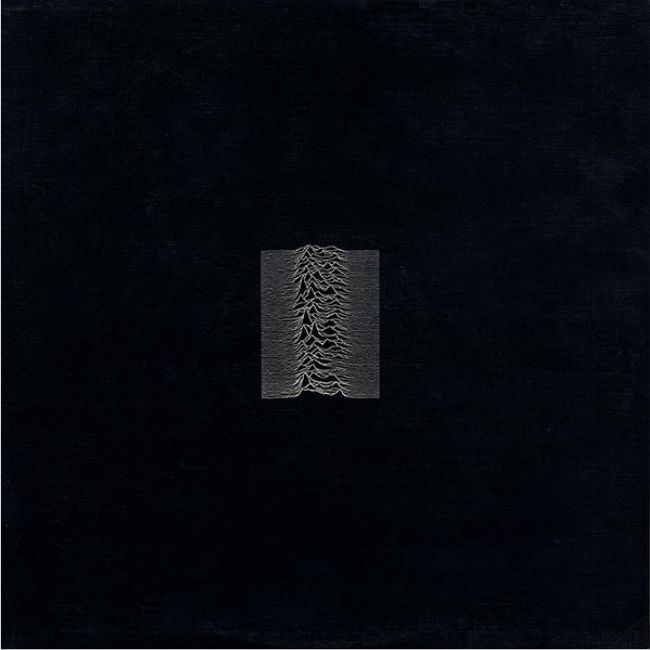 Can there possibly be a more famous cult album in existence than Unknown Pleasures? In the four decades since its release in June 1979, it’s only sold just over 100,000 copies and achieved a chart peak of no.71. Yet, its artwork is one of the most distinctive album covers of all time, and its presence is still felt powerfully in 2019, both in a meme-like existence of T-shirts and merchandise and as one of the most influential albums of all time. Only The Velvet Underground & Nico or the Ramones’ debut could conceivably rival it in these stakes. It’s the album about which the adjective ‘monochrome’ is pretty much designed for; descriptors like ‘bleak’, ‘brooding’ and ‘dystopian’ are often bandied about.

Indeed, so much digital and real ink has been spilled in documenting the creation and impact of Joy Division’s debut album that it’s barely possible to say anything original about it. But everything obvious does bear repeating – the sense of alienation and ennui it evoked through its sparse, crystalline structures, the spine-tingling sound of Ian Curtis’s voice, the incalculable impact that it’s had on so many subsequent generations of artists and fans… by any manner in which you choose to measure it, Unknown Pleasures is an enduring cult classic, and one of the greatest debut albums in popular music’s history.

But what’s worth emphasising is that, to many Joy Divisions fans at the time, Unknown Pleasures came as something of a surprise when it was released. What was on record didn’t really reflect the sonic ferocity of Joy Division in the live arena, the primary means through which the quartet had grown their fanbase up to that point. Any recordings of the band’s live performances (and there are plenty, both official and bootlegged) reveal a much noisier, punkier and aggressive group than the one captured in the studio. This disparity, one which made Joy Division stand out so boldly from the pack, was thanks entirely to the volatile yet visionary genius of the record’s producer, Martin Hannett.

Where the group, particularly Peter Hook, initially envisaged their sound as cleaving much more closely to the punk conventions of the age, Hannett transformed it into something strange and otherworldly. The nocturnal allure of Unknown Pleasures seems to reflect the circumstances of its creation – in the dead of night over two weekends at Stockport’s Strawberry Studios (because the rates were cheaper). With Hannett’s use of pioneering digital effects and musique-concrete techniques (recording the sounds of breathing, footsteps, breaking glass, etc.) and no small amount of psychologically provocative oddities like making the band perform with the heating off and dismantling the drum-kit to record each component separately, over and over again, an icy and unnerving ambience was created. Unknown Pleasures was cold and sparse, stripped-back in stark contrast to the established, maximalist dictats of punk as almost everyone was now familiar with it. In embracing this austere minimalism, Hannett elevated the primitive, rhythmical tribalism of Joy Division’s original sound into a more sophisticated, artier realm.

The album’s musical and lingual themes dwelled on the idea of space and confinement, both external, as it related to the grim and decaying state of late ‘70s post-industrial Manchester, and internal, to do with the state of mind of the group’s iconic lead singer Ian Curtis. Titles like ‘Disorder’, ‘Wilderness’ and ‘I Remember Nothing’ seemed to evoke Curtis’s fragile mental state, suffering as he was from epilepsy and with the weight of a fraying marriage on his mind. ‘She’s Lost Control’, for instance, was written about a young woman with epilepsy whom Curtis had known while working at a job centre in Macclesfield. She had died during a fit, and the singer, himself diagnosed with condition, constructed the track as a requiem, but it’s also filled with anxiety, at the sense that Curtis himself is wary of meeting the same fate as his subject.

Over its ten tracks, Unknown Pleasures emphasises space and silence in a way that hadn’t been as revelatory since the emergence of dub remixes in the reggae genre. Hannett’s insistence on recording every single noise-making element separately, in order to avoid sounds bleeding into each other, gave the album its clinical coldness. The way that Peter Hook’s bass often carries the melody, in tracks like the shivering opener ‘Disorder’, left Bernard Sumner’s slashed guitar chords to provide texture and drama, packing explosive energy and chilling tension often in the same songs. Stephen Morris’s drumming was metronomic and machine-like, the complete opposite to most punk percussion. All of these things were quietly profound in the context of punk’s ‘year zero’ attitude; added together, the effect was revolutionary.

The other star of Unknown Pleasures is, of course, Ian Curtis himself. Every contortion and exhortation in his vocal delivery scans like a desperate plea for connection. On ‘Disorder’, he wants to “feel the pleasures of a normal man”; on ‘Candidate’, he yearns introspectively “I tried to get to you / you treat me like this”. On the heavy-as-hell ‘Day Of The Lords’, Curtis sounds wracked with despondency by the conclusion, singing “where will it end?”;in the surging, sodium-lit ambience of ‘Shadowplay’, he sings hopefully “to the center of the city where all roads meet, waiting for you / to the depths of the ocean where all hopes sank, searching for you”. As a physical presence in the live arena, he was equally compelling – delivering a lyric staring into the middle distance, eyes glazed over, before breaking into a series of windmilling dance moves that, in a case of art reflecting reality, bore an eerie similarity to the epileptic contortions from which he suffered, unbeknownst to some of his audience. It’s easy to throw around journalistic clichés like ‘tortured genius’ in the presence of such performances, combined with Anton Corbijn’s 2007 biopic Control and Kevin Cummins photo-shoots from the era, but it really is the passionate gravity of his baritone that’s the most distinctive element of Joy Division’s music – the much imitated but rarely emulated quality that subsequent post-punk revivalists such as Editors’ Tom Smith and Interpol’s Paul Banks have felt to be essential and indivisible.

Mention must also go to ‘Transmission’, released in November 1979 and, while not included on Unknown Pleasures,is associated with the era. It was recorded in its definitive form at around the same time, and probably shares top billing as Joy Division’s signature song alongside ‘Love Will Tear Us Apart’. A textbook exercise in dynamics and the build and release of tension for so many bands since, ‘Transmission’ is perhaps the definitive and direct display of the group’s aesthetic, much more so than anything on Unknown Pleasures, whose rewards were largely to be found in the songs’ obliqueness.

Joy Division’s music stood for something newer, deeper and more evocative than the straightforward emotions that could ever be communicated by the restrictions of punk’s first wave. Graphic designer Peter Saville’s singularly arresting cover art for Unknown Pleasures also conveyed this, the white-on-black duochrome image (actually a reversed image of a representation of the pulsar CP 1919 that singer Bernard Sumner had found in ‘The Cambridge Encyclopedia of Astronomy’) speaking to something mysterious, unknowable but distinctive about the contents within the sleeve, all without using words. Indeed, Saville’s design was so striking that it helped usher in a new age of minimalist artwork in the music industry, along with the likes of Barney Bubbles’ work with Stiff Records.

Notwithstanding the existence of the first records that could conceivably be described as post-punk, like Public Image Ltd.’s and Talking Heads’ debuts, Unknown Pleasures seemed to confirm the start of a new era: one that left behind the past, and built something out of the vacuum created by the detonation of punk detonation in 1977. When Joy Division went on tour around Britain in support of the Buzzcocks later in 1979, the album was on the way to selling 15,000 copies, and by all accounts they were regularly upstaging their more senior colleagues. The torch was symbolically being passed – punk’s first wave had broken, and bands with greater sonic ambition were already overtaking the ‘three-chord’ practitioners who had kicked the door down for them.

Joy Division’s story, as has been recounted so many times, would ultimately end abruptly and in tragic circumstances. Ian Curtis, his marriage disintegrating and his epilepsy worsening, hung himself at his home in Macclesfield in May 1980, on the eve of a maiden American tour and weeks before the release of Joy Division’s second album Closer. His bandmates eventually elected to soldier on as New Order, with Bernard Sumner reluctantly stepping up to the mic and with the addition of keyboardist Gillian Gilbert. Over the course of the Eighties and five wonderful albums, they gradually became arguably the most critically acclaimed and successful independent bands in the country outside of The Smiths.

But although New Order were many times more commercially successful than their previous incarnation, it’s Joy Division’s legacy that’s always stood tallest, and a key component of that is Unknown Pleasures, the only album by the group to be released in Ian Curtis’s lifetime. Upon its 40th anniversary, there’s still creativity to be hewn from it. Later in June, there’s an event to mark the release of ten brand new music videos, each re-imagining one of the tracks from Unknown Pleasures. There’s a brand new ruby-red vinyl re-issue, housed in a colour-inverted record sleeve, and those who worked on the record are doing rounds of events to commemorate its release.

The greatest legacy of Unknown Pleasures, however, is that it’s still such a cornerstone in 2019, still sounding so futuristic and cutting-edge. It remains as mysterious and alluring as it did upon release, like it had arrived from a wormhole from another dimension. Bands are still trying to channel its use of space, emotion and ennui, and still not quite matching it, even four decades on. You may feel like you’ve got a grasp on it, but you’ve never fully gotten to know it.

Listen to Unknown Pleasures by Joy Division here via Spotify, and tell us what you think below!