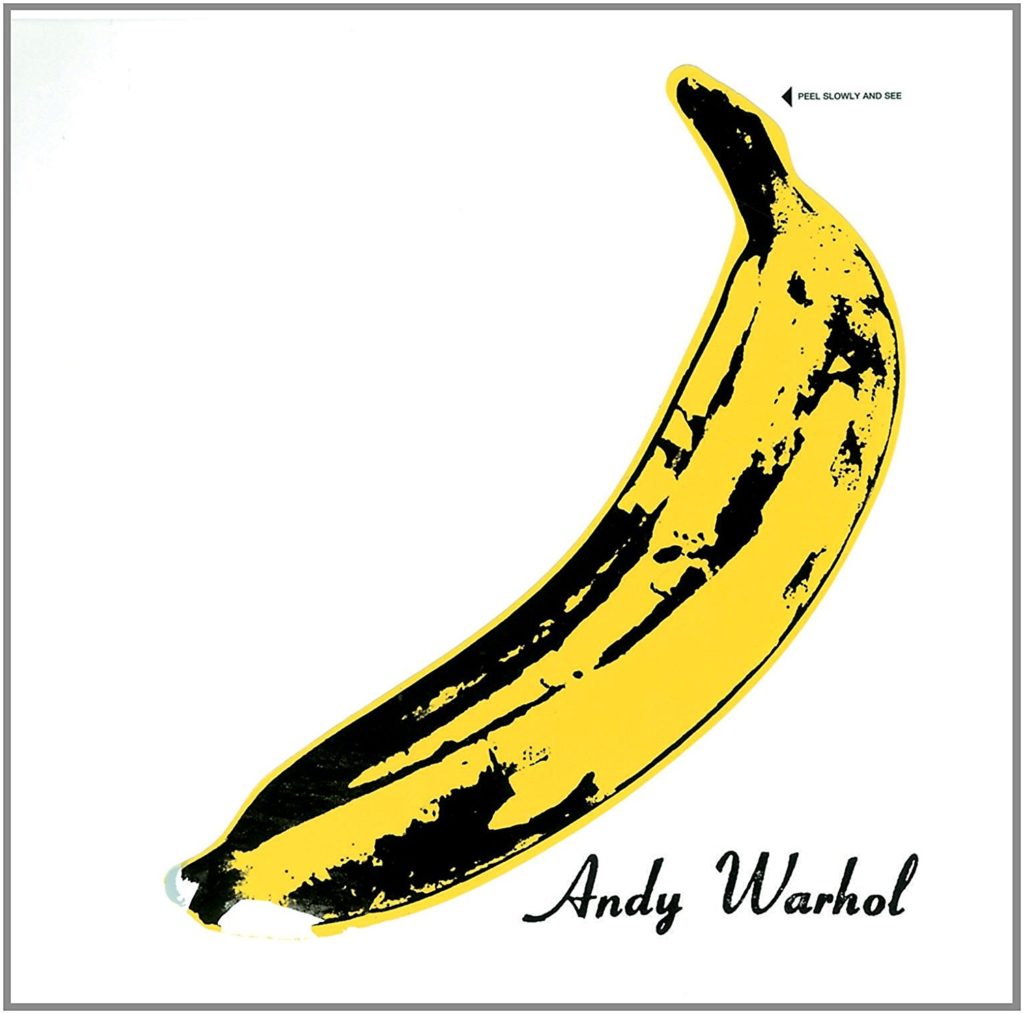 Try to imagine America in 1967: a nation divided by war and peace. As the war in Vietnam raged on, the domestic hippie movement was beginning to emerge as one of the largest phenomena in countercultural history. With it, had surfaced a slew of musical innovation and by the time psychedelic rock took its hold on the Billboard charts, few artists even bothered to contend with a change of pace.

Yet not everyone was so captivated. Whilst roaming the streets of New York, eccentric artist Andy Warhol found himself standing awestruck before the local Café Bizzare’s band-in-residence. The group, having introduced themselves as The Velvet Underground, would soon go on to write one of the most important albums to cement itself in rock ‘n’ roll mythology.

The Velvet Underground were completely detached from hippie ideals. Directly opposing the sunshine qualities of their West Coast counterparts, their amphetamine-fuelled temperament was dark and foreboding. Completely enchanted, Warhol felt compelled to announce his involvement. Soon declaring himself their manager, he was adamant they begin work to record an album.

The entire arrangement fell under unique circumstances. Chief songwriter Lou Reed and classically trained multi-instrumentalist John Cale had both materialised from middle class backgrounds. Reed’s lyrical depth and natural prowess combined with Cale’s infatuation with experimental artist John Cage resulted in an entirely unprecedented musical concoction. Other members included guitarist, Sterling Morrison and Maureen Tucker on percussion. Warhol’s most significant contribution soon arrived in the form of the much sought after siren, Nico – a German model and then, part-time musician.

Once in the studio, The Velvets and Nico were left to their own devices. Warhol wished the band to maintain full artistic freedom, so by declaring himself the producer, he prevented the group’s label Verve (then a jazz imprint!) from any outside meddling. Once the end product finally emerged, the result was nothing short of staggering. Though its commercial success arrived much later than the time of its initial release, The Velvet Underground’s pioneering, self-titled debut proved itself to be an uncompromising marker in rock history.

Leaving the hippies and practically any other oblivious bystanders in a complete state of justified bewilderment, The Velvet Underground & Nico laid waste to any pre-existing musical trends. Its themes of prostitution, sadomasochism and heavy-duty drug abuse were a bleak yet honest account of Reed’s inner city perception. Its sound, for which the most part was crafted by the avant-garde vision of John Cale, was sharp and erratic, though there are a few notable exceptions. Cale’s fascination with drone music rests overtly at the core, steering the rough-around-the-edges recordings with unfaltering and resolute purpose.

One of the most iconic Velvet Underground tracks, ‘I’m Waiting For The Man’, provides perfect early testament for Reed’s outstanding writing ability. Essentially, the song jangles through an anecdotal account of Reed waiting to score from his apparently late drug dealer. As they lie broken above the continuous, crunching guitar riff, the vivid quality to his lyrics offer a very physical experience. You can literally feel the “26 dollars” crumpled within his palm.

He replicates the tangible element of his writing during ‘Heroin’, except this time, he takes it further. It’s easy to see why mainstream music wasn’t exactly ready for Reed’s realistic view on drug consumption. Alongside his candid, palpable lyrics, “when I put a spike into my vein, I tell you things aren’t quite the same” and, “I feel just like Jesus’ son”, the song accelerates, building like the drug beginning to course through his veins. More interestingly, the song crescendos in a deafening hail of screeching feedback but never truly plateaus; much like a junkie unable to attain his ultimate fix.

Elsewhere, Nico delivers an unforgettable contribution on tracks like ‘Femme Fatale’ and ‘All Tomorrow’s Parties’. ‘Femme Fatale’ takes the form of a gentle ballad and who better to sing it than The Velvets’ femme fatale herself. The soft yet stern cadence in her death’s-head voice provides a unique ambience whilst the awkward backing vocals offer additional character. Similarly, ‘All Tomorrow’s Parties’ brings equivocal elements, this time, layered above the typical drone of Cale’s piano phrase.

‘Sunday Morning’, which opens the record is a somewhat standalone track yet it’s quintessential Velvets – serving as a faint glimmer of what was to come. The delicate, chiming melody combined with the atmospheric viola drone accompanies Reed’s breezy vocal in beautiful stylistic fashion. Like the first light of dawn, ‘Sunday Morning’ washes over shedding a glistening, sepia glow.

The outright audacity of The Velvet Underground & Nico unveils itself in ‘Venus In Furs’. Though the ‘60s may have catered to a more liberal mindset, sadomasochism can’t have been hot topic of conversation. The title is taken from Leopold von Sacher-Masoch’s 1870 novella and sees Reed play the character of Severin – a sexually submissive deviant who is subjected to his unorthodox desires. Cale truly comes into his own, the wailing dissonance in the viola amplifying the track’s unsettling feel.

So why weren’t The Velvets quickly credited for the creative genius of their debut? Well, a number of factors dictated its initial shallow popularity. Obviously, the music itself didn’t help its cause, so vastly ahead of its time and outrageously, bafflingly different was it. It’s difficult to think of another case where someone has literally tried to counter the existing counterculture with something that’s far more countercultural than the original… if that makes any sense at all. Can you imagine someone trying to play ‘Heroin’ to hippies basking in the heat of the Summer of Love? I can’t imagine it would have gone down particularly well.

Also, Warhol didn’t really possess the right business acumen. Whatever prior advertising or publicity the record had was limited and to make matters worse, radio stations across the US had banned the music because of its explicit nature. But ironically, its lack of any airtime or immediate mainstream attention is what made The Velvet Underground & Nico into subterranean legend. Would it have gained the recognition it deserved if they hadn’t released the commercially sculpted Loaded three years later? Or was it Lou Reed’s star studded solo career that earned the album its eventual approval?

Whatever the reason may be, The Velvet Underground & Nico distinctly proves that great music doesn’t have to be critically acclaimed or commercially successful upon initial release, because clearly, we all clicked a bit later. But that tiny handful of people who were listening at the time were not only inspired to form their own bands, but so many of those bands turned out to be highly regarded and incredibly influential artists in their own right.

David Bowie, for one, couldn’t stop raving about the Velvets as his career took off, paying back the favour by producing Lou Reed’s hit album Transformer in 1972. The noise-rock, leather jacket-and-shades qualities of the album were picked up by Suicide, Sonic Youth and The Jesus & Mary Chain at the start of their careers. Lou Reed’s cynical, side-on looks at inner city life inspired Tom Verlaine’s urban nocturnes on Television’s Marquee Moon…

The ‘influenced by’ list at the top of this feature could truly have taken up several pages, so seismic is the impact that The Velvet Underground & Nico and its follow-up albums have had on the last half-century of rock music. Anybody who has sought to use their instruments for the purposes of art (as opposed to mere entertainment), to challenge rather than placate their audience, owes an enormous debt of gratitude. Its influence is truly inestimable, and though it sold incredibly slowly for a long time, it is impossible to conceive how guitar music would sound in 2017 if The Velvet Underground had never existed.

Listening to their debut 50 years on confirms its resilience and status as one of the greatest albums in history – perhaps even the greatest. Its archaic aura conceals a timeless capacity that continues to influence and inspire nearly all that come into contact with it. The iconic banana artwork remains a symbol of those who wish to peel beneath the surface, curious to what may lie beneath.

Listen to The Velvet Underground & Nico here via Spotify, and tell us what you think below!