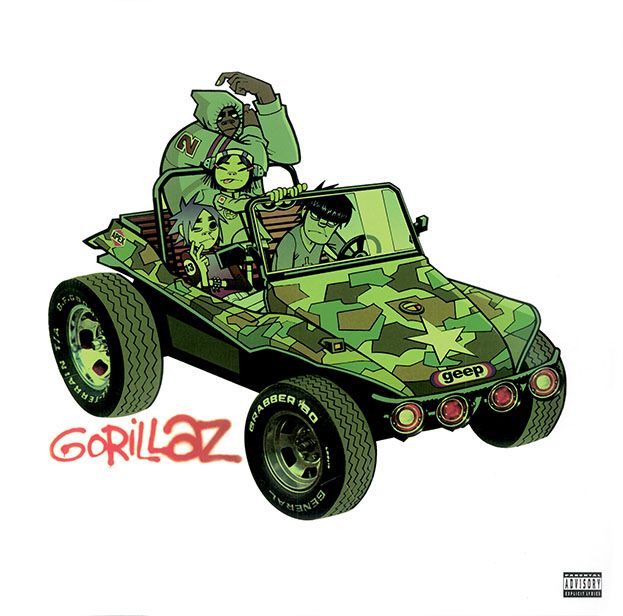 By the time Blur finished 13 near the end of the Nineties, Damon Albarn was a man in crisis. His highly publicised relationship with Justine Frischmann had just come to an end, and his band was falling apart at the seams. Although their breakup wasn’t as explosive as their Britpop rivals Oasis, it nonetheless left Albarn in a state of disarray. Oddly enough, 13 actually resulted in one of their most comprehensive works: it featured some of their best songs such as ‘Coffee & TV’ and the underrated ‘Bugman’, and has aged incredibly well. Although Blur had always been a band ready to experiment, 13 was certainly the most out-there of their albums, and some have argued, their best. However, it was to be their last with their supremely talented but increasingly alientated guitarist Graham Coxon – until 2015’s The Magic Whip, which seemed more of a reimagination than a direct follow-up.

At around the same time, Jamie Hewlett, a distinguished comic writer and animator, had just also ended his relationship with musician (and ex-girlfriend of Albarn) Jane Oliver, and his long-running comic strip ‘Tank Girl’had just been made into a disastrous flop of a movie. Not only that, but the magazine in which his comic strip had been running had just gone under, citing a change in the market. This too left Hewlett feeling lost.

It was under these strange circumstances that Albarn and Hewlett ended up living in a flat together in London. In the flat, after watching more than a fair share of MTV, Albarn and Hewlett came up with an idea to counteract the fakeness and manufactured nature of boybands and created Gorillaz, one of the most musically innovative acts of all time.

It’s a project that could only come out of such low moments, as it shows a sort of growth that is rarely seen when an artist has settled into their stride. At no point throughout their self-titled debut is Albarn settling: he and the rest of the elastically-numbered session band bounce from Latin guitars to reggae to experimental pop, all the way to the impossibly delicious ‘Rock The House’, which mixes De La Soul-esque vocals from the smoothest Del Tha Funky Homosapien with almost laughable, slightly out of tune recorder samples. More than anything, Gorillaz still sounds remarkably fresh two decades on. The heavy bounce of drums and the constant sampling stops any sound from losing its flavour. Albarn never sounds bored either, it’s almost funny how many times he tops himself, or reaches new heights.

Ironically, considering Gorillaz was a project involving the adoption of cartoon aliases, it was also probably Albarn’s most emotional and open work, at least up until this point. He opens up in the middle of ‘Double Bass’ that all of which “makes (him) anxious, sometimes unbearably so”, before a pummelling bassline and slick rhythm guitar brings the track back to life. More so than with Blur, Albarn was honest, open and sounded the best he’d ever sounded. Aside from Albarn, the production is firing on all cylinders. Dan The Automator, the record’s producer, is at his most confident and assured. He turned Britpop pioneers into the glossiest, most well-produced hip-hop band from Britain, and that’s no easy feat.

Gorillaz looked back as much as they did to the future. ‘19-2000’ features sounds ripped straight from Britpop’s golden era: its up-tempo remix, which lives at the end of the album’s deluxe edition, could have easily been a Happy Mondays single, complete with bouncy piano riffs and impossibly catchy lyrics about loving music.

The track ‘Clint Eastwood’ also saw the remix treatment, in a version that became infinitely more well known to the British public, where it is now a garage music staple. Alongside a sped-up beat, and faster vocals, the remix saw MC Sweetie Irie spitting bars over the beat. Its creation was almost genius, the Gorillaz seeing this as an opportunity to capitalise on the garage scene, which was seeing the height of its popularity around the early 2000s. Oddly, that success came despite the memorable music video being created to accompany the slower, longer original version which enjoyed heavy MTV rotation.

‘Clint Eastwood’ would not only be one of their biggest tracks, but also formed an integral part of Gorillaz identity. The track ‘New Genius (Brother)’ featured a crackling folk sample and winding western sounding guitars. The track slowly builds up, with haunting melodies and lyrics warning people to “not trust people they meet”. As with Clint Eastwood’s identity as The Man With No Name in Sergio Leone’s Spaghetti Western trilogy, Gorillaz’ identities were also shrouded in mystery.

For a band that has such a musical identity, their public-facing visual interface was second to none. The group took full command of computer animation and, alongside help from Hewlett, helped create the identities of 2-D, Murdoc Niccals, Russel Hobbs, Noodle, Paula Cracker, Cyborg Noodle and Ace. Along with these visual identities came a deep, humourous and impressively large in-universe story that spans decades of character building and rock’n’roll anecdotes that would make Ozzy Osbourne blush. Even more impressively so, Gorillaz visual identities were brought to life when they toured in Europe following their debut, with all the characters appearing on stage and even communicating with the audience. Originally, this annoyed Albarn, who for years had been the frontman for Blur and was used to being centre stage, leading him to claim that all he wanted to do was stick his head through the screen and perform his songs centre-stage.

With the anonymity and constantly changing nature of Gorillaz, Albarn was able to work with some of his own inspirations, notably Tina Weymouth and Chris Frantz from Talking Heads, who appeared on percussion and backing vocals on ‘19-2000’. This collaborative template has been something that the Gorillaz project later heavily relied upon; their latest album Song Machine featured collaborations on every single track.

Gorillaz’ visual identity and commercial value aside, their debut remains one of the most inventive, interesting and unique works by any artist currently operating at any sort of peak. While all of their subsequent albums have enjoyed much greater commercial success – it was only really with 2005’s flawless Demon Days that Gorillaz shook off the novelty tag – it stands now as a fascinating document whose undeniable flaws and inconsistencies give it the character that makes it so distinctive. Gorillaz experiments beautifully with ideas without ever sounding like they’re running low on them, and sounds as fresh as ever today, twenty years after its release. The origin story of one of modern pop’s most interesting and consistent bands, Gorillaz remains an astonishing release that’s well worth revisiting and cherishing.

Listen to Gorillaz by Gorillaz here via Spotify, and tell us what you think below!