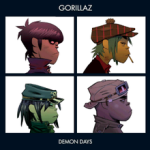 It’s strange to think an album by a fictional band could have such a sizeable impact, but the 2005 album Demon Days by the animated group Gorillaz, the brainchild of Blur singer Damon Albarn and illustrator Jamie Hewlett, helped to shape the direction of pop music today. For all its undoubted creativity, the project’s self-titled 2001 debut ultimately felt a tad sterile, like a laboratory experiment with a USP attached. It didn’t help that its two biggest hits (‘Clint Eastwood’ and ‘19/2000’) had to be remixed by other artists to hit the charts. While it got good critical write-ups, it didn’t entirely capture the public’s imagination. Following a little over four years later, Demon Days was significantly more coherent and timely, and pushed Gorillaz from intriguing studio novelty act to pop-culture phenomenon.

Dan The Automator, Albarn’s key musical collaborator on Gorillaz, was pushed out for the second album, leaving the Blur frontman completely in charge of the music. His masterstroke was to bring in Brian Burton (aka. DJ Danger Mouse) on production duties, his first major project following his rise to notoriety with the previous year’s illicit mash-up The Grey Album (which took a-capella lyrics from Jay-Z’s The Black Album and set them to cut-up beats culled from The Beatles’ The White Album). Burton would go on to make the huge hit single ‘Crazy’ in 2006 with Gnarls Barkley, whose musical lineage is clearly traceable back to his work on Demon Days. It helped make him a hugely in-demand figure in the music industry: scores of production projects, including albums by The Rapture, Beck, U2, Red Hot Chili Peppers, A$AP Rocky and no fewer than four albums by The Black Keys, would come his way over the next decade. That’s not even mentioning his work with James Mercer on Broken Bells…

Right from the short into and the deep chasms of dub perfection on ‘Last Living Souls’, there’s a not only a distinctively cinematic scope to Demon Days, but also a sense of narrative, of the last, tiny fraction of humanity having atrophied and dwindled in the face of exhausted natural resources. But this is no heavy-handed concept record: the loosely dystopian concept is merely an undercurrent, never overwhelming the music itself. The sense of gnawing, post-millennial, post-9/11 dread percolates through the album, thanks to Danger Mouse’s sparse and tightly disciplined production. The impressive and diverse array of guest stars – something that was missing from Gorillaz – also help make the album seem more real and less theoretical this time around.

For the most part, the guest stars hail from the soul and hip-hop worlds and are suited to the genre – Roots Manuva, MF Doom, De La Soul, Neneh Cherry, Bootie Brown (of The Pharcyde) – but a handful of unexpected oddballs crop up too. Happy Mondays’ Shaun Ryder turns up to give the irresistible, chart-topping single ‘DARE’ a deliciously eccentric coating with his impenetrable Mancunian drawl. Madvillain’s MF Doom makes ‘November Has Come’ entirely his own, with Damon sounding like the guest. Ike Turner assists with the liquid funk of ‘Every Planet We Reach Is Dead’; even actor Dennis Hopper contributes a spoken word part to ‘Fire Coming Out Of The Monkey’s Head’, about ‘happy people’, ‘strange folk’ and a volcano spirit that serves as a metaphor for capitalism, resources and natural disasters. Moments such as this last track only make sense in the context of an album, but several of Demon Days’ tracks stand up individually – so much so that it yielded three UK Top 10 singles.

Many will remember the fantastically animated, Hayo Miyazaki-inspired and strangely melancholic video for the lead single ‘Feel Good Inc.’, released in April 2005 and hitting #2 in the UK Singles chart (trivia – it is also the only Albarn-penned song ever to have reached the US Top 40). With a whip-smart rhythm and star turn by De La Soul, it dealt with the dumbing down of mass media and its effect on captive populations, it would be a theme that Albarn would revisit frequently, from The Good, The Bad & The Queen to the recent Blur album The Magic Whip. The loping electro shuffle of third single ‘Dirty Harry’ was occupied with American foreign policy, with Bootie Brown jeering at President Bush with the kiss-off line “the war is over – so says the speaker with the flight suit on”. Ultimately, it’s these sumptuous, ultra-modern pop moments that make Demon Days so memorable.

On a conceptual level, Demon Days had a palpable sense of dread – that not only is the future inexorably coming closer to us, it also may very well spell our doom – the kind of overarching scope that very few pop albums even try to convey, let alone succeed in doing so. But this was no weighty, claustrophobic OK Computer-style trip – Albarn and Danger Mouse remembered to keep these songs nimble and lithe for maximum accessibility. Five years later, Gorillaz would take this ecological concept to another level with Plastic Beach, which expanded the roll call of guest stars to a bewildering number but couldn’t quite replicate the chemistry. Demon Days, therefore is likely to remain their finest achievement.