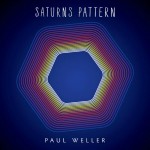 Paul Weller; ‘The Modfather’; the changing man – he’s back with his twelfth solo album Saturns Pattern, and it’s pretty far removed from the classic Weller sound. So much so that this literate and passionate artist has forgotten to include an apostrophe in the title, which refers to the persistent hexagonal cloud formation around the planet’s north pole. The nine-track album encompasses the experimentation taken from records over the last decade, from 22 Dreams to Sonik Kicks, and has found inspiration with a psychedelic folk twist to his usual style. An album ranging from two minute punk tracks to 8½ explorations, such a spread is relatively unchartered territory for Weller.

Put in context of the rest of his career, from The Jam to The Style Council, he’s always been an artist to embrace new ideas and a fresh sound. So, from the well-received rediscovery of his art-pop roots on Wake Up The Nation and Sonik Kicks, this is a logical progression in terms of sound but not of structure. ‘Long Time’ is a thundering bass-led glam rock effort in which Weller’s voice takes on a bluesy range with a hint of Hawkwind. Quite surprising for an artist who brushed off any associations with prog rock in the past! Lead single ‘White Sky’ is also peppered with style references to Steve Winwood and Marc Bolan’s T.Rex.

‘Pick It Up’ is a woozy psychedelic trip into Weller’s more atmospheric work with a distinct sense of his classic soul sound. We then fall into the staple ballad territory with ‘I’m Where I Should Be’ and ‘Going My Way’; the latter being a piano ballad with a particularly strong Beach Boys undercurrent. Overall, Saturns Pattern offers something a little different to Weller’s oeuvre but it isn’t revolutionary by any means – it blends together the new and the old – the rocksteady Modfather of the ‘90s and the reinvigorated genius of the ‘00s.

But by the same token, this won’t matter to any Weller fan, as Saturns Pattern is a satisfying listen from an artist who isn’t afraid to push boundaries and call his own shots. It shows that, at the age of 56, there’s plenty of life and creative energy left in the old dog yet, putting him up there with Mark E Smith, Nick Cave and Kevin Shields as people that not only you shouldn’t write off in their fifties, but actually pay attention to. Only time will tell whether these nine tracks will stand next to his best solo work on Stanley Road and Heavy Soul, but in my opinion, it’s his best work of the last decade. (7/10)