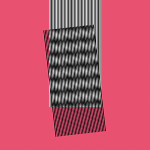 Front cover of ‘Why Make Sense?’

I must admit, I find it slightly surprising that Hot Chip have remained together long enough to make a sixth studio album. Groups with this many creative individuals within them – singer Alexis Taylor with his solo album Await Barbarians; Joe Goddard’s side project The 2 Bears; Al Doyle and Felix Martin with their project New Build, which released a record just six months ago – tend to drift apart through musical differences. Particularly when you consider that Hot Chip’s commercial peak ‘Ready For The Floor’ is now long behind them, one might have expected them to have gone their separate ways by now. However, 2012’s well-received In Our Heads reinvigorated them with a sense of purpose, and so it seems they’ve got a ways to go yet. Why Make Sense? continues in the same general direction as its predecessor, attempting to capture the magic of their live sets on record.

This time around, there’s a very faint feeling of dread and paranoia infecting Hot Chip’s usually effervescent music. You can see this in the double meaning of the record’s title: could it mean ‘why make sense with your music?’ – the surface explanation given Taylor and co’s dedication to making heartfelt, left-of-centre electronic music throughout their career – or could it mean ‘why make sense of it all?’ – of the cultural and information overload that defines networked life on social media in 2015. This ambiguity is echoed in the moiré pattern on the album’s front cover – a pattern created by overlaying two identical ones in a certain way – indicating that this is Hot Chip using all the same tools to convey a slightly different message than before.

We start with their trademark funk of ‘Huarache Lights’: sleek, light of foot, clipped beats, everything you’d expect from a Hot Chip floor-filler. Taylor’s anxiety seeps through with a lyric about human redundancy in the face of technological advancement (“replace us with the things that do the job better”) even as he’s singing about ‘everything going to be just fine’, and it’s this sort of vague dread about what the future holds that seems to occupy the record, only for salvation to come in the shape of friendship, brotherhood and the abandon of music. The fidgety, fractious ‘Love Is The Future’ conveys that eventual salvation but recognises that it must be fought for (“we know we’ve got tonight… when I’m with you my heart is on the line”).

Concept record this most certainly isn’t, however, as there’s a decent number of party-starters to keep the mind and feet occupied, with a number of rhythmic patterns that more closely resemble funk and hip-hop than most things Hot Chip have done in the past. ‘Started Right’ seems to crib the distinctive clavichord sound used by Stevie Wonder on ‘Superstition’ and puts it to good use. Taylor’s warm falsetto gently melts over the snaking, bendy bass synth lines of ‘Cry For You’, and ‘Easy To Get’ channels the vibe of Daft Punk’s Random Access Memories by using the Chic / Nile Rodgers guitar sound over some deliciously nimble funk. There’s moments that are more distinctively theirs, like the dreamy percussion workout of new single ‘Need You Now’ that could have come from any of their previous records.

However, as has become traditional with Hot Chip records, there’s an unfortunate dip right in the middle of the album which stymies any claim it might have to being a consistently outstanding record. The first of Why Make Sense?’s two slow jams, ‘White Wine And Fried Chicken’, mistakes lethargy for mood, while the perfunctory synth-funk of following track ‘Dark Night’ sounds like it’s been phoned in at the last minute. The second slow jam, ‘So Much Further To Go’, is much more fully realised, before the record ends impressively with the title track, reflecting the information overload of our times in song form, with a dance beat played on rock drums amid a storm of noise reminiscent of the sonic terrorism of Fuck Buttons. “Why make sense when the world around refuses?” questions Taylor amid the chaos. Amen brother.

For the sixth time, Hot Chip have come so close to delivering the masterpiece that we know they capable of on so many occasions now, you suspect they’re doing it deliberately. In truth, it’s simply because their experimental bent, their existential need to colour outside the lines, is so strong that they stray into some ideas that don’t work. That said, when the time comes to release a Hot Chip best of, it’ll probably be the best compilation ever. For now, we’ll have to make do with yet another charmingly imperfect but hugely enjoyable electropop album. (7/10)

Listen to Why Make Sense? here!