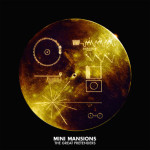 Front cover of ‘The Great Pretenders’

To listen to the glorious, classic pop stylings of Mini Mansions, you’d never guess that it was a Queens Of The Stone Age side-project. But it’s hardly surprising, given the highly eclectic nature of that group’s last album …Like Clockwork, that their members should be indulging in such varied musical disciplines. QOTSA bassist Michael Shuman set up the group in 2009 with guitarist and co-vocalist Tyler Parkford and multi-instrumentalist Zach Dawes and produced a self-titled album the following year, but has put it on hold since. Five years later, Mini Mansions have produced a genuinely fantastic album that delivers on the promise of their debut, one that seems to learn all of the correct lessons from the vast history of psychedelia-infused pop and fits it into one neat 45 minute package. And it features Brian bloody Wilson, for goodness’ sake!

Imagine an alternative universe where MGMT weren’t so stubborn and didn’t disappear up their own arses after Oracular Spectacular and went on to be the truly magnificent indie-pop group they should have been, and you’ve got The Great Pretenders. They combine the synthesised dreamscapes of Future Islands with classic pop references dating back to The Beach Boys and Neil Diamond, and the variety of emotions they seem to convey with just a handful of ideas, stripped back economically for their best parts and put back together to make something totally refreshing. On the opening Diamond MOR pastiche ‘Freakout!’, they get away with well-worn tropes like “face in the crowd / you’re talking too loud / but I can’t hear you calling”, amid flourishes of piano and drum fills because it feels celebratory and joyous rather than po-faced. This is followed by the ridiculously dramatic and hook-intense ‘Death Is A Girl’. On both of these tracks, Shuman and his band create such contrasting emotions with essentially the same 2/2 beat – sped up for the tense ‘Death Is A Girl’, but strolling pace for the sweeping glory of ‘Freakout!’.

The brilliant moments just keep on coming on an album that frequently feels like one long peak, shifting mood constantly but doing so successfully every time. The Super Furry Animals-esque ‘Creeps’ and ‘Fantasy’, to misappropriate Blackadder, have more twists and turns than a twisty-turny thing, a vari-speed combination of Future Islands and Rocky Horror Show. Brian Wilson isn’t too noticeable on ‘Any Emotions’, and it’s to Mini Mansions’ credit that you don’t. The churning drums of ‘Vertigo’, on which Parkford channels Elliott Smith’s broken half-whisper, features another guest spot, this time by Arctic Monkey Alex Turner, who delivers a typically elliptical verse. The back-to-back ‘Honey, I’m Home’ and ‘Mirror Mountain’ in the album’s second half take things in a more discordant, aggressive and structureless direction, reminiscent of confusion merchants Battles.

We land back on earth for the closing three songs, though, with the piano-led ‘Heart Of Stone’ serving as a breather from the galactic explorations. The absolutely gorgeous wanderlust of ‘Double Visions’ must surely be a single, sounding as though it’s just descended directly from the heavens, or a cut from some futuristic remake of Pet Sounds, a timely reminder that Mini Mansions are primarily concerned with pop at heart, rather than experimentation, before ending with the wraith-like ‘The End, Again’. In the hands of most artists, the sentiment and the unashamedly retro arrangements would sound cloying, but Mini Mansions deliver with such heart and true feeling that it’s impossible not be taken with them. For a QOTSA side-project, it knocks the lumbering supergroup Them Crooked Vultures into a cocked hat. Warm, lovable and compellingly catchy at every turn, The Great Pretenders deserves to be the crossover radio success of 2015. If you’re feeling disillusioned with the indie scene and love indulging in nostalgia, this record was made for you. (9/10)

Listen to The Great Pretenders here!