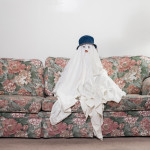 One of the most promising new American indie acts of the decade, all-female four piece Chastity Belt have moved up in the world with their second album, and their first for a national independent label. Formed in the small university city of Walla Walla, WA, they fit neatly into a lineage of intelligent indie from Northwestern America dating back to Sleater-Kinney and Beat Happening. Rather than stick with the tried-and-tested sound that’s got them this far, Chastity Belt have decided to change it up a bit, the sign of ambitious and restless creativity. Time To Go Home, on the surface at least, is a much mellower beast than its predecessor. In contrast to the rough, choppy licks of No Regerts, this album is defined by loosely strummed guitar backdrops that sound like a slightly grungier version of Real Estate.

This change is illustrated perfectly by mid-album highlight ‘On The Floor’, which reverses the party dynamic of the debut with its decelerating outro. The short, direct skeletons of that debut have also been built upon and expanded slightly from last time. Exceptional opener ‘Drone’, making reference to Sheila Heti’s part-literary novel part-self-help manual ‘How Should A Person Be?’ and attacking ‘mansplaining’ (“he was just another man trying to ‘teach’ me something”), sees primary guitarist Lydia Lund picking out a shimmering riff out of vocalist Julia Shapiro’s static wall of rhythm guitar. The tumbling rockabilly feel of ‘Why Try’, the spidery surf-punk and alt-folk combination of ‘Joke’ and stiff guitar pop of ‘Trapped’ show Chastity Belt to be at home in many different sub-genres within modern indie.

The lo-fi headbanging fun of ‘The Thing’ provides a change of pace halfway through, with all four members shrieking joyously at the end. Recent single ‘Cool Slut’ shows the existential shift between records. On No Regerts, a song proudly celebrating sleeping around such as this would have been a party-starter, with its lyrics like “ladies it’s okay to be slutty… so what? We like to fuck”, but here its assertion of righteousness is underscored by a pang of doubt. Penultimate track ‘I Don’t Care’ is another example, with Shapiro questioning her own mindset as well as asserting her confidence. “Is it cool not to care?” she wonders, before rueing “I got drunk out of boredom” and then delivering the kiss-off line. Rarely has the phrase “I don’t care”, one of the oldest tropes in the language of rock’n’roll, been spoken with such profundity and meaning.

Trying to enjoy the moment at the same time as being feverishly anxious about the future, Time To Go Home is an interesting step forward in the career of this most promising of bands. There’s a ferocity and intelligence behind the warm, echoing reverb of the songs, which acts as a kind of Trojan horse for the sharp feminist observations and critiques that is Chastity Belt’s message. It’s lyrical themes make it seem like a kind of millennial’s survivalist guide: Shapiro’s lyrics are about doubt and confidence in equal measure and at the same time, about coming to terms with and shrugging off setbacks, unapologetic for its mistakes but acknowledging the regret left behind as a result of them. (8/10)

'Making A New World' could have been Field Music's masterpiece,…