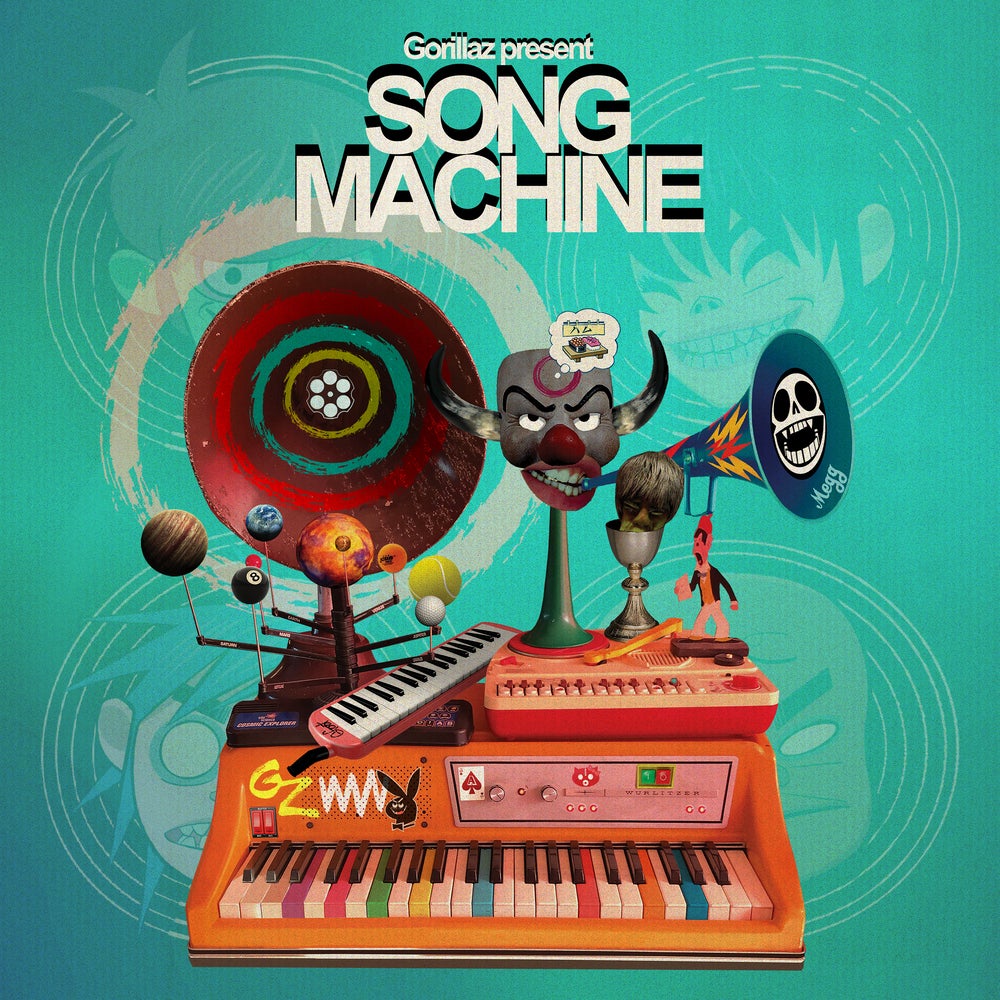 Gorillaz have never been a band afraid to conjure their own dystopian hellscapes – see their reputation-establishing classic Demon Days or its 2010 successor Plastic Beach. However, now that the real world seems to have caught up with their predictions, there is no less pleasure in absorbing their sonic and visual interpretations of the disorder which surrounds us. The remarkable range of Strange Timez, in terms of musical genre, embodies Damon Albarn’s ability to produce a piece of work that reflects the scope of the upheaval the world has undergone in recent months. Even by their own standards Gorillaz sound like a band wholly consumed by dystopian mayhem, yet fortunately for them this environment is where they thrive the most.

On Strange Timez, Gorillaz draw more from the collaborative experience 2017’s Humanz than their most recent effort, The Now Now, which was pared back and stripped almost entirely of guest spots. However, on this latest release, Albarn and his simian avatars have found a greater balance between Humanz’ occasional over-indulgence in guest appearances, whilst regaining their distinctive sound that was somewhat lost on their 2018 follow-up.

As a project, Song Machine was kick-started by the release of ‘Momentary Bliss’ (featuring Slaves and Slowthai) way back in the heady days of January. Albarn claims that upon the single’s release he had “absolutely no idea where it was going” – a sentiment which feels somewhat fitting for how 2020 has panned out since. However, Albarn and his visual collaborator Jamie Hewlett have not only been undeterred in the face of the pandemic, they have used the time to produce some of the most dynamic and fitting music of the year to date.

The record is not so much drenched in lyrical references to the world’s current landscape, instead of permeated and overcast by a certain feeling of dread, a unified atmosphere of the times we are living in. Gorillaz make it near impossible to anticipate what is around the corner, as the twists and turns in genre always leave the listener guessing. The real key to Strange Timez’s triumph is that the quality of the music or artwork never slumps regardless of whichever melodic plane the band is traversing. Coherence on this record is born not out of thematic or lyrical content but an overarching commitment to musical experimentation and trust in collaboration.

Opener and title track ‘Strange Timez’ features The Cure’s Robert Smith, whose haunting vocals are juxtaposed with a slowly building dance beat that is just waiting to explode, as well as 2D’s (voiced by Albarn) spoken word piece for end-times. The combination is intoxicating, and when the plinky pianos fade away and the beat finally drops into a synth-wave eruption everything is intensified further; 2D’s lyrical mutterings become more garbled and incomprehensible, while Smith’s singing remains tirelessly eerie. This opening song represents an enthralling introduction by Gorillaz to their newly conjured world.

When compared with the dystopian dance behemoth that preceded it there is familiarity to be found in the following track ‘The Valley Of The Pagans’. The straight-forward drum beat and steady bass, coupled with Beck’s trademark surreal lyricism are comforting in contrast to the brilliantly chaotic opener. However, the song’s synth-based indie-pop acts as a glitzy disguise for progressively dark lyricism, which targets the vapid and underlying emptiness of an existence solely dependent upon social media gratification.

‘Pac-Man’, featuring ScHoolboy Q, feels like Gorillaz distilled down to its purest form and is hugely reminiscent of some of their most successful rap-based bangers from Demon Days in the best possible way. 2D’s dreary vocals make way for one of Q’s most wide-ranging and compelling guest appearances of his career. From his first verse to the second, the TDE signee’s lyricism morphs from top-tier braggadocio; “My type of drive, you can’t buy this shit / You got a heart but it don’t beat like this”, to a starkly dark suicidal introspection; “‘Fore I make it to jail, probably put one in the head”. As the thunderous synths melt into slick instrumentation the energy of Q’s performance and rapidly spiralling lyrical content drives the track to its thrilling conclusion.

‘The Pink Phantom’ constitutes Strange Timez’s melancholic magnum opus and is truly one of the most significant songs of the Gorillaz discography thus far. The track’s combination of guests Elton John and 6LACK represents arguably the most unexpected feature pairing of the year – as well as one of the most wildly successful. The latter’s heavily autotuned crooning offers a sublime juxtaposition to Elton John’s glamorous balladry which tells a story of a love lost. Whether this loss is conceptual or personal, the emotional impact is just the same, as the song easily asserts itself as one of the most ambitious of the band’s career. The pairing of these two guest stars from such different sonic universes epitomises Albarn’s immense ability across the record to challenge his featured artists into extending their talents in unknown territories. This potently sad track is certainly a risk that pays off in demonstrating the sheer musical virtuosity of Gorillaz.

Albarn and Remi Kabaka Jr.’s exquisitely executed production of ‘Aries’ ensures that its blatant New Order emulation is entirely forgivable, quite aside from the presence of Peter Hook on bass giving the track a certified stamp of approval. The reverence Damon Albarn has for this genre of music, and artist in particular, is evident in the fact that the track goes beyond merely a respectful and loving homage to reach a level of mastery which would not seem out of place amongst Low-Life-era New Order singles. Albarn’s tender vocal effort here as well is an album highlight.

The stunning range of genre on Strange Timez is no better encapsulated by the closing quartet of tunes. While Octavian and Kano could be broadly categorised under the same umbrella of UK hip-hop, the songs they feature on – ‘Friday 13th’ and ‘Dead Butterflies’ – see them occupying the disparate spheres of dub-reggae and trap respectively. However, both are united in their killer contributions; Octavian’s intoxicatingly lethargic vocal intonation and bleak lyricism, contrasted with Kano’s slick flow and masterful verse construction. An even greater disparity can be seen between the album’s closing pair, however. The elegant ‘Désolé’, which includes a gorgeous vocal performance from Fatoumata Diawara who is backed up by beautifully engineered instrumentation, precedes UK punk rock inspired banger ‘Momentary Bliss’. This song, featuring apt contributions from Slowthai and Slaves, is where the Song Machine project started and where it comes to a fittingly energetic end.

Fortunately for Gorillaz fans the Song Machine production line does not stop there. Six extra tracks feature on the deluxe version of the album (available across all the major streaming platforms) and the quality is barely diluted at all. An honourable mention is necessary for gems such as the intoxicating ‘Opium’ featuring EARTHGANG, the insane yet brilliant ‘With Love To An Ex’ which has a beguiling performance by Moonchild Sanelly, as well as closer ‘How Far?’ in which Albarn pairs Skepta with the late, great Afrobeat pioneer Tony Allen. This longer version of the album is a goldmine for fans, as Albarn lets the featured artists take control to a much greater extent. However, the musical diversity and scope of this extended release remains astounding, particularly because the band never sound out of their depth in their experimentation with such a vast sonic palette.

Not only have Gorillaz produced one of their finest pieces of work to date with Strange Timez, but they have uncovered a unique method of song production and album compilation that could bear fruit for years to come. The fact that life seems so perpetually chaotic in the real world affords Gorillaz almost endless creative material to mine and leaves them potentially at the precipice of a golden era of artistic production in their own dystopian realm. (9/10) (Joss Lambert)

Listen to Song Machine, Season One: Strange Timez by Gorillaz here via Spotify, and tell us what you think below!