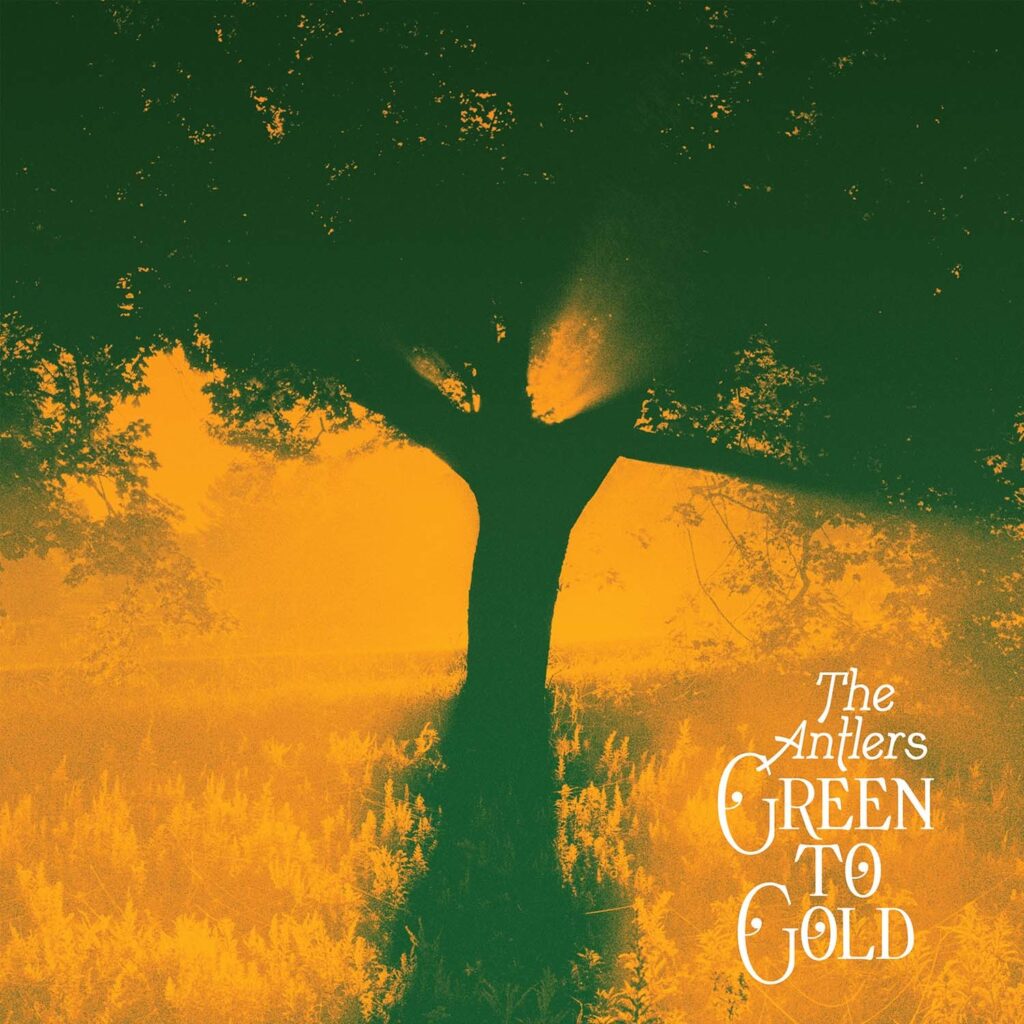 After a prolonged battle with debilitating aural conditions, Peter Silberman revives The Antlers for the guardedly optimistic ‘Green To Gold’.

For almost its entire fifteen-year existence, Peter Silberman’s project The Antlers has been associated with gloom and withdrawal. Ever since the group was elevated out of the indie ghetto with the universal acclaim that greeted 2009’s third album Hospice, a partly autobiographical masterpiece about the pain of terminal illness and of having to let go bound up in the narrative conceit of an abusive relationship, Silberman’s music has been synonymous with bleakness, emotion and catharsis expressed through fragile, spectral indie. Part of an explosion in Brooklyn’s DIY scene that included acts like Sharon Van Etten, The National and Grizzly Bear, two more excellent albums followed in Burst Apart (2011) and Familiars (2014) before Silberman was struck down with chronic tinnitus, cochlear hydrops and hyperacusis, painful conditions affecting his hearing that required almost complete silence to manage.

A long period of recuperation followed, The Antlers mothballed as he worked on a much quieter solo album, released in 2017 and titled Impermanence, as a way of adjusting to devastating new personal circumstances. It’s with no small amount of pleasure, then, to learn that Silberman has reactivated The Antlers with drummer Michael Lerner and delivered a new studio album.

Listening to its bright, serene production values and the soft edges of the instrumental elements, it won’t come as a surprise to learn that Green To Gold was recorded mainly in the morning. In comparison to the wintry whites and blues that have defined the outlooks of their previous albums, the background ambience here bucolic, pastoral and restful. From the sun-dappled, autumnal dream-pop of the opening instrumental ‘Strawflower’ – one of two that bookend the record – there’s a definite sense of optimism shot through proceedings, albeit wavering and trepidatious at times. “Do you think you could free me from the man I’ve been?”, Silberman sings on mid-album track ‘Just One Sec’, and it seems to underline the album’s key themes of personal rediscovery.

Silberman’s vocal strength is always one of the key attributes of any Antlers record, and it’s no different here. Although he rarely lets out one of his towering, cathartic howls that so defined Hospice, that’s because the general demeanour and outlook of Green To Gold means he doesn’t need to. Instead, his lithe falsetto enjoys a first-among-equals kind of status amid the brass, chimes, piano and soft licks of guitar that bleed into each other in a hazy ambience. All those elements arguably mesh the most beautifully on ‘It Is What It Is’, but truthfully the album is full of such beauties. The lullaby-esque chimes that sound like they might come from a child’s toy twinkle in the background of lead single ‘Solstice’, the stunning centrepiece of ‘Green To Gold’ with its gorgeous guitar figure repeating throughout, and the waking-dream confusion of ‘Wheels Roll Home’ are just the most notable.

Given the context of its creation, it’s wonderful to hear that Peter Silberman is back releasing new music. The Antlers were always quiet operators, but responsible for some of the most profound and poised music in the alternative sphere. What’s even more encouraging is that Green To Gold sounds like a fresh start after seven years away, the opening of a new chapter in Silberman’s career rather than a coda to an old one. (8/10) (Ed Biggs)

Listen to Green To Gold by The Antlers here via Spotify, and tell us what you think below!