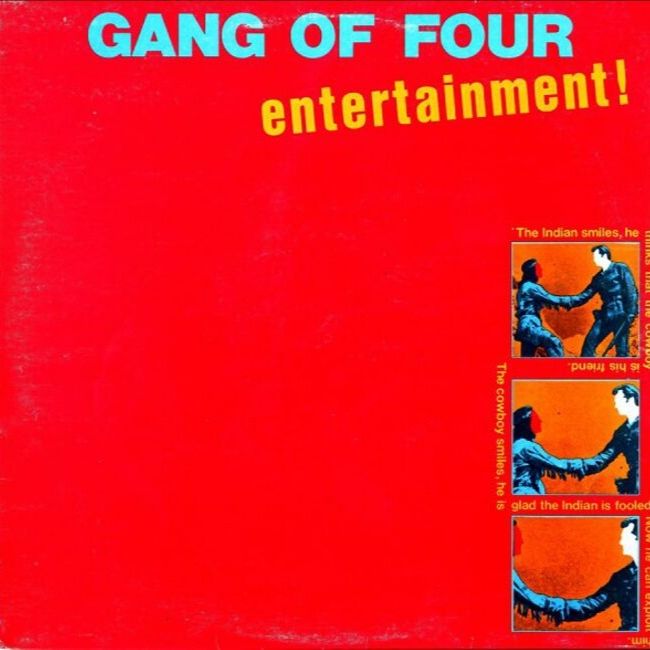 It’s strange even now to conceive of an avowedly left-wing post-punk band, particularly one named after a particularly brutal political faction of communist China associated with the widow of Mao Tse-tung, signed to a major label. But that’s precisely the kind of strange business dealing that it was possible to arrange in the aftermath of punk’s explosion at the end of the Seventies, when Gang Of Four found themselves courted by EMI. Lauded by bands as diverse as Red Hot Chili Peppers and Nirvana to LCD Soundsystem and The Cribs, Gang Of Four didn’t achieve massive commercial success, and their artistic fortunes dwindled as their career advanced into the mid-Eighties, but their hugely important legacy can be summed up solely by the power of their extraordinary, near-flawless debut album Entertainment!, released in late September 1979.

Hailing from London and home counties, but finding each other in the creative cauldron that was the University of Leeds’ fine art department in the late Seventies, a small community that centred around The Fenton pub and produced other bands like The Mekons and Au Pairs, Gang Of Four were different from the very beginning. Although they shared an ideological affinity with the punk revolution, singer-guitarist Jon King, guitarist Andy Gill, bassist Dave Allen and drummer Hugo Burnham bonded over a fondness for the aesthetics of more classical rock influences, eschewing the more puritanical ‘year zero’ doctrine that punk’s first wave espoused. Instead, they enthused about the likes of early ‘70s hard-rockers like Free.

After just a couple of singles, beginning with ‘Damaged Goods’ that appeared on Edinburgh’s Fast Product label in December 1978, Gang Of Four were snapped up by EMI and got to work on their first full-length album Entertainment!, a record that perfectly captured the group’s restless yet precision-guided sound. This was music directed at the head and the heart as well as the feet, sharing the precision of the thriving pub-rock, Dr. Feelgood inspired scene that focussed on a working-class formulation of the blues, but also forging an intellectual, avant-garde approach they shared with groups like Wire, Public Image Ltd. and Talking Heads. Music critic Simon Reynolds described Gang Of Four’s sound as “checked and inhibited hard rock: cock rock [with] the cock lopped off.”

Entertainment!’s enduring genius and influence is the band’s use of space in the mix. The tightly wound yet unmistakably funky and lithe bass riffs from Allen are absolutely in step with Burnham’s sleek accuracy on the drums, creating a kinetic compound that’s impossible not to move some part of your body to. The gaps that these economical rhythms create are filled with Andy Gill’s angular, staccato guitar technique, a style and disposition that was the complete opposite of the aforementioned cock-rockers that used to dominate before punk. Scratchy and pounded out in a rigid, almost Morse code fashion, Gill’s style is ruthlessly utilitarian, in service of the music and never showy, never likely to break into some howling solo, despite his obvious aptitude for the instrument.

Backing him up on guitar and providing lead vocals is Jon King, who, four decades later, is the sole remaining founding member of Gang Of Four. Inspired by the imminent upheaval of neo-liberalism that Margaret Thatcher’s newly-elected Conservative government represented at the end of the industrial strife of the Seventies, and what they saw in day-to-day life in Britain’s streets where a nascent far-right was making itself heard, King’s lyrics were defiantly anti-sexist and anti-fascist. ‘At Home He’s A Tourist’ and challenged men’s and women’s societally expected roles; ‘Ether’ challenged the hegemony of the media and how important issues get obscured or buried, as does ‘5.45’, more specifically about war reportage. The clattering, scratchy ‘Guns Before Butter’ concerned militarism in society, ‘Contract’ examined how the alienating effects of modern life reduced romance to something transactional rather than emotional, and ‘Not Great Men’ took down the Great Man theory of historical progress. Dry stuff, under normal circumstances, but while King’s lyrics are often severe and angry, they’re delivered with such raw energy (and no small amount of wit) that they never descend into hectoring or sloganeering.

Indeed, the sheer danceability of Gang Of Four’s performances served to sugar the pill, in any case. Right from the almost Funkadelic-based call-and-response of the churning ‘Ether’, cheesewire guitars sound metallic and abrasive but ultimately do not dominate the mix, dovetailing perfectly with his bandmates’ contributions. ‘Natural’s Not In It’, despite King bemoaning the commodification of human interactions, singing about “coercion of the senses” and “this heaven gives me migraine”, is set to a hypnotic volley of slashed chords that’s like a perpetual motion machine. The metronomic ‘Return The Gift’ is precise in its two-note riff, contrasting with careening bass and the stiff funk of the rhythm. Closing track ‘Anthrax’ (listed as ‘(Love Like) Anthrax’ on some editions) is perhaps the most fascinating of all, much more abstract and dissonant in its deployment of guitars and with its pattering drums seeming like they’re on the verge of collapse.

Then there’s ‘At Home He’s A Tourist’, possibly their best known song, and one that nearly saw Gang Of Four on ‘Top of the Pops’ but for their refusal to change “rubbers” to “rubbish” at the request of the show’s producers, effectively precluding their chances at proper commercial success. With its simple chant-like delivery and sparse, danceable production, it encapsulates everything that made Gang Of Four’s story so compelling. It shows that, as some have argued, that they were a pop band at heart, albeit an incredibly dry and ideologically outspoken one, and it’s interesting to think about what their career might have turned out like if they’d become proper chart stars off the back of Entertainment!. The exceptional ‘Damaged Goods’, again another would-be hit, is simply one of the tightest band performances in the history of post-punk, an example of how intuitive and effortless Gang Of Four were at their best, as is the effortlessly catchy ‘I Found That Essence Rare’.

As it was, Gang Of Four proceeded to dilute and fragment as their career progressed. Their second album Solid Gold, released around 18 months later, was a carbon copy of Entertainment! in many ways, boasting the same ruthlessly practiced line-up and a batch of similarly strong tracks, but by 1982’s decent but unspectacular Songs Of The Free bassist Dave Allen had quit to be replaced by Sara Lee, whose excellent voice offered the band greater commercial prospects. Its standout single ‘I Love A Man In Uniform’ could have been a huge hit, but radio airplay was banned due to potential insensitivity as Britain went to war in the Falklands. However, by 1983’s massively over-produced Hard, drummer Hugo Burnham suffered the ignominy of being replaced with a drum machine, and things really started to go downhill creatively. The following year, Gang Of Four had dissolved. Two reunions have occurred subsequently, with five subsequent albums showing occasional glimpses of past glories, including 2019’s Happy Now.

At the peak of their powers, though, they were certainly more thought-provoking and subtle than The Clash’s sometimes overbearing approach, Entertainment! and some of the band’s subsequent output led Rolling Stone’s David Fricke to describe Gang Of Four as “probably the best politically motivated band in rock & roll.” Along with other post-punk masterpieces like Wire’s Pink Flag and Joy Division’s Unknown Pleasures, they also played a key part in establishing the post-punk template that still inspires bands today, from Bloc Party and Franz Ferdinand to newcomers like Squid and Roxy Girls.

Listen to Entertainment! by Gang Of Four here via Spotify, and tell us what you think below!