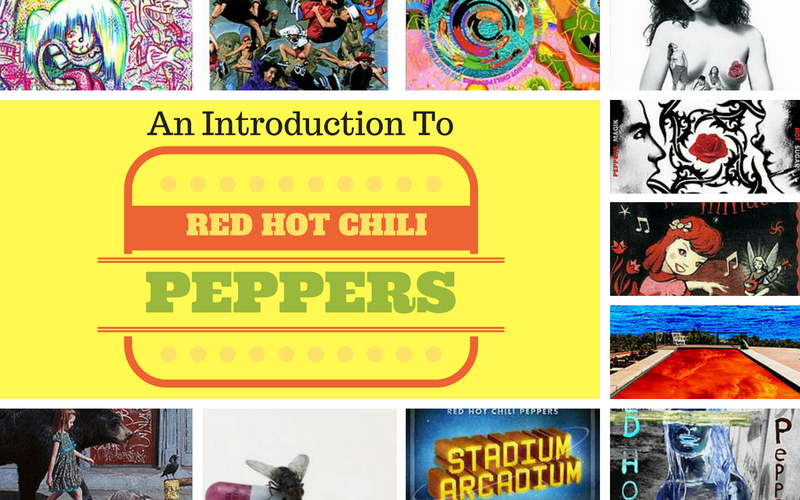 Having just released their 11th studio album The Getaway, more than 32 years after their first performances together, Red Hot Chili Peppers have been consistently successful at what they do for so long that it’s easy to forget just how many changes they’ve been through – musically, physically, spiritually – over three decades. They’ve travelled a long journey from cock-in-sock-rocking, party animal funk-punks to stadium-filling, radio-friendly millionaires in that time, and their longevity and cultural relevance to consecutive generations of fans is matched by very few.

Unsurprisingly, given such a lengthy discography, there have been artistic and commercial highs and lows in that time – but for the most part, RHCP’s career arc is like that of many others of their era, with popularity and critical acceptance eked out over time, and then consolidated and refined over many commercially fruitful years once they had become established.

Their formation and early years were messy, and characterised by shifting line-ups and a very gradual mastery of their sound that took them four albums to really get right. Through these early years, their reputation was primarily built upon their impressively improvised and often riotous live performances as opposed to anything they actually laid down on record.

RHCP’s earliest line-up was under the name Anthem, a garage rock outfit, featuring Anthony Kiedis on vocals, Hillel Slovak on guitar, Michael Balzary (aka. ‘Flea’) and Jack Irons on drums. By the time they had changed their name and acquired a speculative record contract with EMI Records America in November 1983, Flea having left temporarily to join ‘80s punk heroes Fear, and Irons and Slovak were also playing in What Is This?.

Their debut self-titled album the following year, which did feature Flea but had to be recorded with Cliff Martinez on drums and Jack Sherman on guitar, was an enjoyably ramshackle yet undeniably sketchy affair, holding few clues as to the band they would eventually become. Although the original RHCP quartet had now reformed, 1985’s Freaky Styley and 1987’s The Uplift Mofo Party Plan were similarly embryonic, the band’s identity undefined and not yet distinctive from their strong influences. Together, these three albums provide a snapshot of a talented band with the right ideas (bringing Gang Of Four’s Andy Gill and Parliament’s George Clinton to produce the first two seems like a perfect summation of those early influences and are great matches on paper) but whose execution is in need of focus.

1988 was an annus horribilis for the Chili Peppers, as shortly after the tour for their third album finished, Slovak died from a heroin overdose, leaving the group shocked and in deep grief. Irons then quit the group soon afterwards, citing an inability to come to terms with Slovak’s death, throwing the band briefly into turmoil as they strove to find two replacements. Eventually settling on the prodigiously talented John Frusciante on guitar, the man who would play on the band’s finest albums but who has drifted in and out of their line-up since, and Chad Smith, who has been an ever-present behind the drums, the band released Mother’s Milk in 1989, a much more consistent album that signalled a notable upturn in creative and commercial fortunes. Headed by an excellent cover of Stevie Wonder’s ‘Higher Ground’, it became their first album to crack the Billboard Top 100.

The dawn of a new decade also saw RHCP start afresh in the studio, with a crucial musical alliance with producer Rick Rubin, a musical marriage that would last for over 20 years and six albums. The partnership yielded success immediately, with their first project together, 1991’s Blood Sugar Sex Magik, acting as the band’s watershed moment that saw them finally discover their latent identity. Rubin helped them to unlock all the talent that had previously only suggested itself. Poignant and funny, displaying a tender side to the band alongside loads of irresistible funky rock riffing, they broke ground in the mainstream for the first time. Peaking at #3 in the Billboard 200 and going seven times platinum, Blood Sugar Sex Magik propelled the Chilis into the stratosphere and became regarded as an influential component of the alt-rock explosion in the ‘90s in America.

That success came at a price, however, as Frusciante departed the group for the first time in 1992, citing the pressures of immense fame, touring and increasing arguments with Kiedis. Hiring Arik Marshall to complete the rest of the massive BSSM tour and then recruiting Dave Navarro (ex-Jane’s Addiction) as guitarist, One Hot Minute was the eventual, long-awaited follow-up in 1995. Necessarily altering RHCP’s internal chemistry, the album has always been regarded as anomalous in their discography, and its reputation has always been divisive among fans. Some enjoyed Navarro’s straighter, darker psychedelic rock riffing, while others mourned the comparative lack of RHCP’s signature funk-infused style.

For better or worse, One Hot Minute was definitely a disappointment in commercial terms, with none of its four singles catching fire and selling barely a quarter of what its predecessor had. Though 1997 saw them enjoy another worldwide hit in the shape of ‘Love Rollercoaster’ (from the Beavis & Butt-Head Do America soundtrack), tensions in the band were evident. Sessions for a follow-up album, which tentatively started at the start of 1998, were abandoned and Navarro was fired. The Chilis needed to get back on the right path, and quick.

Re-enter John Frusciante, who had cleaned himself up after spending most of the intervening six years struggling with a drug habit. Recorded over three months at the start of 1999, their seventh album saw them slide easily back into the implicit inter-band understandings and musical formulas that had made BSSM such a terrific success. Noticeably more spiritual and empathetic than the last time around, Californication burst at the seams with excellent singles and compelling deep cuts. The mainstream music scene had become more sanitised in the eight intervening years, but RCHP proved there was still a place for well-crafted, precise and radio-friendly guitar rock as Californication sold over 6 million copies in the States, restoring them to the throne they had vacated in the middle of the decade, and they entered the new millennium at the top of their game.

Following a little over three years after Californication – quite a short time, in modern RCHP terms! – the band retained its line-up from one complete album to another for the first time in its career with eighth album By The Way in 2002. Shifting ever so slightly into the realm of slower-paced balladry (‘Tear’, ‘I Could Die For You’, etc.), it was for the most part an extension and consolidation of the formula that had restored the Chili Peppers to prominence. The conveyor belt of quality hit singles also continued, with four prime cuts that would make it on any RHCP ‘best of’ collection, and a hugely successful world tour made for an album that represented an underlining of talent.

Things were kept exactly the same once again for 2006’s double album blowout Stadium Arcadium, as RHCP settled comfortably into the third decade of their career. Seeing no need to change, they used the expanded running time to simply explore existing territory further, and mainstream hits like ‘Dani California’ kept on coming. Some criticised the samey-ness that they argued was creeping into their work, but musical enterprises as big and as long-running as Red Hot Chili Peppers tend not to overhaul their working processes without very good reason. However, it did prove to be the last album with Frusciante, as he once again quit the band in late 2009.

Eventually, he was replaced by current guitarist Josh Klinghoffer, who had in any case been a live back-up guitarist for RCHP for a number of years. Another favourable reception and huge world tour greeted their tenth album I’m With You in 2011, as they adapted to the loss of Frusciante’s complex and dazzling talents by making their songs leaner and more streamlined in general.

However, it also marked the end of RHCP’s long-standing partnership with Rick Rubin, one of the most successful producer-artist relationships in recent rock history, at least in commercial terms if not strictly artistic ones. Few could deny that, after more than two decades together, the Chili Peppers could do with a fresh challenge in their fifties, and so they appointed Brian Burton (a.k.a. modern hip-hop pioneer Danger Mouse) to be their next creative foil. Recruiting from the world of hip-hop made sense, as the genre was where Rubin had made his name in the ‘80s with the likes of Beastie Boys and Run-DMC, but Burton also had a proven understanding of rock, lending his production to The Black Keys for four of their most successful albums. He brought his minimalist aesthetic to their 11th album The Getaway, released in June 2016, which has been cautiously hailed for its attempt to change things up in the fourth decade of the RHCP’s illustrious career.

It’s this album they’re touring when they headline the 2016 Reading & Leeds Festivals on August 26th-28th for the fourth time in their career – more than any other artist or band. Looking at a list of all the huge names who’ve headlined over the years and not done so more than twice (for whatever reason), it’s hard not to be impressed by Red Hot Chili Peppers’ enduring ability to keep themselves both commercially successful and culturally relevant.

Ahead of those huge gigs, here’s our top five albums from the band, and a career-spanning ‘Beginner’s Guide’ Spotify playlist for those of you unfamiliar with the Chilis. Happy listening!