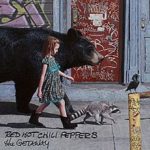 Red Hot Chili Peppers’ first album in a little over five years The Getaway marks a significant changing of the guard for the band, with their previous producer Rick Rubin, who has been behind every Chilis album dating back to 1991’s breakthrough Blood Sugar Sex Magik, being replaced and a wholesale integration of Josh Klinghoffer, seeing him settle into his role more comfortably following the departure of longstanding six-stringer John Frusciante. The result is a welcome reprieve from 25 years of cramped mixes about California, with new producers Brian “Danger Mouse” Burton and Radiohead collaborator Nigel Godrich taking a relatively hands-off approach (despite co-writing five of the songs) and letting the band do what they do best: funk around.

And they did just that, resulting in an album full of variety without resorting to the usual disorderly sprawl that has hobbled both Stadium Arcadium and I’m With You. The head-scratching neo-disco of ‘Go Robot’ deals with themes of robot sex with shimmering synths and syncopated handclaps, and ‘Goodbye Angels’ features mounting pressure which after three minutes collapses into a polyrhythmic mosh pit jam much to fans delights. But it’s not all fun and games, with the album having a confrontational tone; lead single ‘Dark Necessities’ is fueled by self-awareness with its swelling, doom-like intro, euphoric piano laden middle eight and provoking lyrics “you don’t know my mind”, suggesting that they are here to set the record straight. This is further apparent in penultimate track ‘The Hunter’, featuring a focused and poignant Anthony Kiedis embracing the sadness as he sings “time just has its say” and closer ‘Dreams Of A Samurai’ is grim and flat illustrating naked emotion through its lyrics “no one ever wants to die alone”.

Constituting their 11th album overall, and the first in their fourth decade as a band, The Getaway is a bold attempt to jibe away from their past party-dog reputation with more somber and reflective artistic ambitions, steering them back onto the right track but sees them running out of petrol before they reach their destination. (7/10)

Listen to The Getaway here via Spotify, and tell us what you think below!