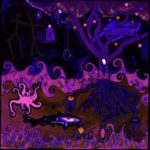 Norwich duo Rosa Walton and Jenny Hollingworth have always had a unique connection. Going back some 13 years, to when the duo were aged four, they found themselves drawn to one another and that instantaneous connection is one which has carried on throughout their childhood and into young adulthood. This intuitive relationship is evidenced best in I, Gemini –a truly unique album which pushes pop music to its limit. Let’s Eat Grandma describe their sound as “sludge-pop” and while that may not be the most normal of descriptions, they certainly are not your most normal of bands.

Opening track and single ‘Deep Six Textbook’, a song that criticises the school system (“I feel like standing on the desk and screaming I don’t really care”), is a genre-hurdling blend of synths, sax and keys as the team show a faux-harmony in their vocal which keeps the track wonderfully accessible. Fundamentally, I, Gemini is a brilliant pop album. ‘Eat Shiitake Mushrooms’ begins ominously as glockenspiels and the ‘hot organ’ effect on a keyboard give the track a sense of witchcraft (a theme the duo are all too keen to play to), before the track erupts with an alt-pop dance sound. ‘Sax In The City’ may not be an obvious earworm but the booming off-tilt saxophone works.

There are delicate moments on the record too, the mandolin and cello opening to ‘Chimpanzees In Canopies’ is a delicate oriental sound which sounds vaguely like the work of John Martyn. Meanwhile, ‘Welcome To The Treehouse Part 1’ is a disparate track combining the sounds of early Lykke Li and Kate Bush to usher in the more rambunctious ‘…Part 2’ of the track. The latter is a low-fi blend that brings a layer of emotion to the album due to its raw sound, even if the track is nothing more than youthful dreams of a world far away.

All aspects of their music are brought together in the spellbinding ‘Rapunzel’ which is almost nightmarish as it speaks of the darker original version of Rapunzel, crossed with the well-known case of Genie (a child who was locked away for 13 years from the outside world). The carousel pianos fade beautifully into Daniel Johnston styled piano, before completely flipping back for the song’s subject matter. This is an immediate piece of dark beauty and one which belies the duo’s early years.

But Let’s Eat Grandma aren’t a stereotype, they don’t abide to what one would expect when thinking of the music of teenage girls, even if the subject matter does at times (have a guess at what Chocolate Sludge Cake is about). This is an expansive, genre-pushing and all round fun album that is wonderfully capped off by closing track ‘Uke Six Textbook’, the ukulele alternative to ‘Deep Six Textbook’.

In I, Gemini Let’s Eat Grandma have found a way to rewrite the pop rulebook in a startlingly fresh way. The duo show brilliant amounts of cohesion as the cacophony of instruments dazzles. It is an album which demands your attention and doesn’t let go from beginning to end; there is a clear unity and core to the music and despite its range of instruments (which are all played by the two-piece) and textures, it is a wonderful piece of ethereal psych-pop – long may it continue. (9/10)

Listen to I, Gemini here via Spotify, and tell us what you think below!