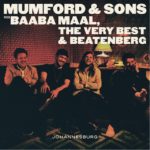 After rocketing to fame in the last half decade and picking up awards on both sides of the Atlantic, Mumford & Sons are without doubt one of the biggest bands on the planet. But no success is without criticism and, despite the Grammy and BRIT plaudits, many people still label them as stale and formulaic. Johannesburg, a brand new EP from the London four-piece, is something of a novelty – albeit one that is becoming more popular – as it sees Marcus Mumford et al combine forces with various musical talents from around Africa.

Johannesburg was recorded over two days whilst on tour in South Africa and sees the band follow in the footsteps of Damon Albarn and Paul Simon to varying degrees of success. Opening track ‘There Will Be Time’ features West African sounds with various melodies and rhythms reminiscent of the likes of Tinariwen as sounds from around the world are combined excellently to begin the album.  However, there are times in the EP where the band go back to their prototype of big chorus; ‘Fool You’ve Landed’, in spite of its minimal percussion intro, fails to inspire with a melodramatic chorus missing its mark greatly. While ‘Ngamila’ works better when the Londoners just let Brit-Malian duo The Very Best take over.

The EP isn’t without its merits though, as closer ‘Si Tu Veux’ walks the line of drama and builds nicely with hints of Sigur Rós and Mbongwana Star, the track is without doubt one of the best things Mumford & Sons have done since 2009’s ‘The Cave’. Johannesburg is an ambitious crossing of worlds, and on the whole it must be said the collaborations are good thing. Marcus Mumford’s percussion has been pushed to new boundaries and new melodies have been explored, and in a hell of a lot more interesting fashion than last year’s Wilder Mind, but it remains to be seen what kind of effect this will have on their future output. Mumford & Sons continue to surprise in their changes of style, but for now this is another hit and miss record, and sadly by now, that isn’t a surprise anymore. (6/10)

Listen to Johannesburg EP here via Spotify, and tell us what you think below!