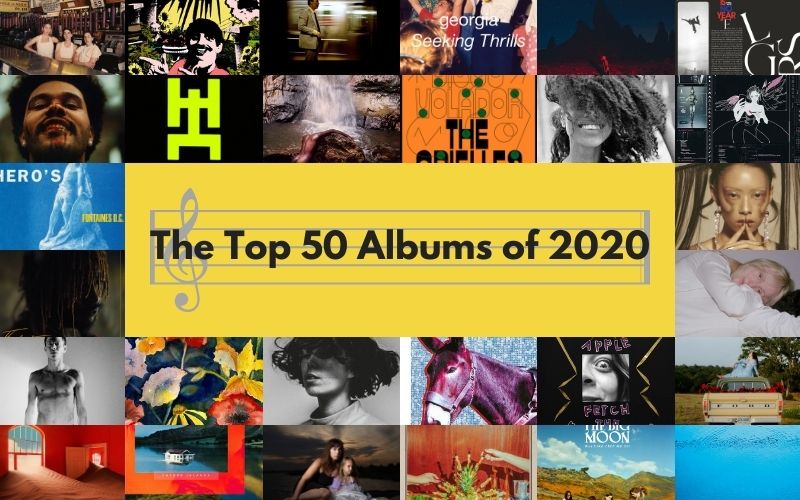 Sophomore studio albums written on the road by newcomers bedazzled by stardom rarely work. But A Hero’s Death, written while touring their lauded debut Dogrel and released a little over year following it, found Fontaines D.C. in the same rich vein of songwriting form, and one that expanded upon their template. Evidenced by the title track, Grian Chatten’s sharp, tongue-in-cheek vocal delivery complemented the bracing post-punk onslaught as ever, but the real rewards were to be found in the moments where the band embraced their darker, calmer side. No difficult second album syndrome here. (EB) (LISTEN)

Written at lightning speed during the lockdown, How I’m Feeling Now became its essential, uplifting soundtrack, loaded with anthems about feelings we all experienced this year: missing people/friends and an insatiable urge to party. Album opener ‘pink diamond’ sees Charli chanting “I just want to go real hard” – well, she certainly did. Completed in about six weeks, with help in the creative process from fans on Zoom calls, this ingenious album was born out of the lockdown time-loop that we have been stuck in for most of 2020. Thank God we had it to help us through. (RC) (LISTEN)

Moses Sumney’s follow up to his debut Aromanticism leans into everything that shone most on his breakout record – sparse, yet hauntingly beautiful arrangements, emotional journeys to within and to the dark, a falsetto voice that would have no trouble filling up cathedrals. græ is a sprawling two-part record on which Sumney continues displaying his rock-solid, yet completely unique songwriting sense. Genre-hopping seems to be a trend so normalised now that it barely seems worth pointing out, but on græ he and his many contributors (Thundercat and James Blake among them) manage to make every foray into new sonic territory so seamless and distinguishably their own, that it almost becomes a genre onto itself. And above all the technical musical craftsmanship details of the record, there is its emotional core, touching upon the complexity of identity, of either a bestowed-upon or self-inflicted “outsider” status, on loneliness, on various grey areas of existence. The resulting work is as complex as it is absolutely necessary. (EW) (LISTEN)

Like an undefeated boxer, Freddie Gibbs just keeps on delivering knockout blows. After teaming up with Madlib for the second time on last year’s Bandana, the Indiana-born rapper returned to bring us the hip-hop album of the year in Alfredo. Working with The Alchemist, Gibbs’ gruff flows and nuanced bars surrounding the life of crime blend seamlessly with his luxurious arrangements. The guest appearances are top notch as well, with Rick Ross dropping his best verse in aeons on ‘Scottie Beam’. Alfredo is a marriage made in heaven between an MC and a producer who can’t do wrong. (Matty Watkin) (LISTEN)

Katie Crutchfield wore experience and determination like a badge of honour on her fifth Waxahatchee album. The heaviness and noise of Out In The Storm and the moody electronic influences of 2015’s Ivy Tripp, both divisive records, were resolved into the most confident and consistent collection of her career. The backing provided by the band Bonny Doon, consisting of unfussy, steady arrangements and modest blues chord progressions, laid a sturdy musical foundation for perfectly observed songs about new beginnings, coming to terms with regrets, and having the courage to accept mistakes and move past them. A quiet masterpiece. (EB) (LISTEN)

SAWAYAMA is not just a great album, it’s a mind-blowing head trip, a kaleidoscopic combination of Justin Timberlake-esque guitars, nu metal riffs and laidback hip-hop production. Rina Sawayama sounds at ease as much over ‘STFU!’s roaring guitar as she does over the Bruno Mars-tinged ‘90s anthem ‘Love Me 4 Me’. It was a huge album that made critics across the world wake up and listen, which you would struggle not to do with songs as big and enjoyable as ‘Who’s Gonna Save U Now?’. Sawayama poked fun at the tropes of rock as much as she embraced them, making this album a perfect display of the influences that helped shape her as an artist. As much as the album is a mismatch of ideas, it flows with expertise, confidence and alongside Rina’s brilliant voice, making SAWAYAMA one of the best pop albums since Carly Rae Jepsen’s Emotion. (HK) (LISTEN)

Mike Hadreas understands pain more than most. Having gone through drug addiction, homophobic abuse and struggles with Crohn’s disease, his early work as Perfume Genius articulated his suffering through lo-fi, intimate piano ballads. As his career has progressed, shards of light have broken through the darkness, and his fifth album Set My Heart On Fire Immediately is his most sanguine release yet. Hadreas explores tenderness, desire and emancipation through a whirlpool of styles, including ethereal shoegaze (‘Describe’), shimmering synth-pop (‘On The Floor’) and Roy Orbison-inspired rock ‘n’ roll (‘Whole Life’), but his inimitable, clever writing pulls it altogether. It’s another powerful statement by one of the decade’s true musical (ahem) geniuses. (MW) (LISTEN)

Phoebe Bridgers is the undeniable indie rock darling of 2020. With Punisher, she brought us an even more mature, varied songwriting voice than we saw on her debut, one more daring to explore its highs and lows. Punisher is full of tenderness, whether it’s yearning for understanding or closure, expressed by nuanced vocal melodies, paying homage to Elliott Smith both lyrically and sonically, or taking a brasher approach. It trails topics such as failing relationships due to their unhealthy nature, mysticism, death and the undercurrent of the ever-threatening ‘End’. Punisher straddles two polarizing extremes of its genre, but most importantly it brought us the already emblematic 2020 ‘bangers’ such as ‘Kyoto’, ‘Garden Song’ and ‘I Know The End’, the latter being the collective cathartic scream-athon we all need. (AS) (LISTEN)

After a flawless 2019 with her group Big Thief, Adrianne Lenker’s latest solo effort songs not only continued to prove her magical songwriting ability, but somehow made an acoustic album feel massive. The light strums and airy vocals alone are enough to make this album impactful. Not to mention, the themes of heartbreak, loss, and isolation that find their way into the detailed lyricism. Tracks like ‘anything’ and ‘heavy focus’ are ridiculously enchanting not only in melody but feeling too. The movement of this track is natural, intimate, and remarkably human, as is the rest of the entire album. From songs, we see an artist that’s just as powerful as a member of a unit as they are on their own. Focused, captivating, and simply put, beautiful, it’s what the definition of a solo album should be. (AC) (LISTEN)

Fiona Apple’s fifth album Fetch The Bolt Cutters instantly became a cultural moment and monument. Sonically encapsulating our then-first lockdown, seemingly imprisoned in our own houses’ reality with its violently expressive and percussive nature, it barged into our lives to provide comfort, resolution and plenty of food for thought. Dropping eight years after Apple’s previous musical affair The Idler Wheel…, Fetch The Bolt Cutters lent itself as a keyhole view into her private life, previously problematically viewed as overly sensitive, overly emotionally volatile and ‘quirkily’ unhealthy, as tales of her mental struggles were used to fuel the vulture-like hype machine, mystifying her music and personality. With Fetch The Bolt Cutters, Fiona Apple approaches all this head-on, in her exceptionally evocative songwriter ways, coming out on top. It’s an album underscored by trauma, but celebrating perseverance, endurance and healing in words sharper than glass, adorned with heart-warming sounds of peace that fill Apple’s household, like the barks of her dog, Marcy. (AS) (LISTEN)