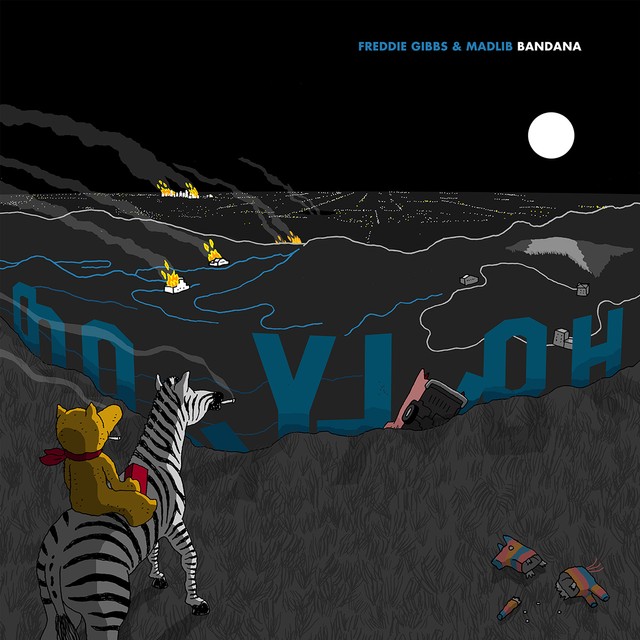 Freddie Gibbs and Madlib join forces once again for their second collaboration LP ‘Bandana’, which sees them explore each other’s worlds even more thoroughly.

When a collaboration between Freddie Gibbs and Madlib was announced in 2014, it registered as an immediate head-turner. How would these two artists – one a hard-hitting gangbanger from Gary, Indiana, the other a soft-spoken, old-school DJ with a penchant for obscure jazz samples – reconcile their glaring differences? The result was something stronger than what many probably anticipated. More than just an interesting collision of disparate styles, Piñata emerged as a surprisingly cohesive work, with Gibbs’ deep baritone sounding perfectly at home enveloped in Madlib’s lo-fi jazz and soul loops. In its clash of sensibilities Piñata managed to open up new possibilities in each of the artists’ respective styles; Gibbs was forced outside of his comfort zone, adjusting adeptly to the challenge of his producer’s famously old-fashioned technique, while his harsh lyricism lent Madlib’s warm, retro beats an invigorating freshness. Now, five years later, the two have teamed up for another album, Bandana.

In retrospect, there’s much less call to be surprised by Piñata’s success. Since 2014 Gibbs has demonstrated again and again his technical versatility, able to bounce between various styles seemingly at will. Think of the way he commands his feature on Young Thug’s 2015 single ‘Old English’, following the song’s left-field trap rhythm for a few bars before crashing down on the beat with a powerful delayed introduction: “Gangsta Gibbs, ho, fresh up off a powder pack”. He has an uncanny knack for finding the pocket and bending the beat to his will.

Gibbs’ proficiency is evident on Bandana as well; he’ll often settle comfortably into a song’s laidback groove before kicking things up a notch with a seamless shift into double-time (‘Crime Pays’ and ‘Situations’, to name two examples), and he never gets lost in Madlib’s sudden beat changes, smoothly following along with the producer’s whims. On the later track ‘Gat Damn’, he offers an apt summary of the album on the whole: “I can’t move the same I gotta readjust how I manoeuvre.” It’s a line that speaks not only to his restless artistry, what seems like a constant desire to find new sonic modes of expression, but also his thematic concerns. Bandana is an album about reflection – examining one’s past and trying to find a new path forward.

Whereas his previous LP, 2018’s Freddie, was a work of almost reckless exuberance, Bandana is introspective in tone, finding Gibbs, unsurprisingly, back in the mode of Piñata. On the first proper track ‘Freestyle Shit’ he carves out a dichotomy that defines much of the record. “Yeah, ’cause when this music shit wasn’t movin’, man / I said I might as well be movin’ thangs”. Backed by horn samples and a bouncing bassline, his delivery is misleadingly nonchalant. Before his music career took off he was in the streets hustling to fund his mixtapes. (“Crack cocaine, I was my own investor.”) But now that he has found success he is finding it difficult to extricate himself from that world. Later, on the Donny Hathaway-sampling ‘Practice’, probably the album’s most sombre track, he wonders, “How am I gonna break up with the streets? / I got the questions but I can’t find the answers / Delicate circumstances”.

Much of the album is defined by such practices. He reminisces about the past, sometimes nostalgically but often painfully – haunted memories, mistakes made, and lost friends are always present. On ‘Fake Names’ he speaks to that trauma: “Every time I sleep, dead faces, they occupy my brain.” Later he recalls an incident at an arcade as a kid, where he watched his uncle stab another man in the neck. In ruminating on these memories he tends to fixate, specifically, on the passing of time: on ‘Situations’ he remembers seeing a friend indelibly changed after being run over by a motorcycle (“I seen him transform to crackhead Ed”).

At times this fixation even extends beyond his own lifetime. “I be all in these bitches’ stomachs like Flat Tummy Tea,” goes the hook to ‘Flat Tummy Tea’, a rather innocuous Instagram-conscious joke that quickly turns to something more caustic as it continues: “Crackers came to Africa, ravaged, raffled, and rummaged me / America was the name of they fuckin’ company.” The song, which is marked by an uncharacteristically distorted synth riff by Madlib, goes on to note the frivolousness of the criminal pardons Obama made before leaving office, and considers the ubiquitous presence of slave stories in popular media (“Slave movies every year, yeah, the master gon’ remind us”). To Gibbs things have hardly changed, and for people like him, those systematically oppressed, the future is often all but decided. “Incarceration my destination, I would wind up / Addicted to medication, poured another line up.”

That all of this contemplation is backgrounded by Madlib’s beats is significant. These sorts of poignant reflections can be found elsewhere in contemporary hip-hop, in Future’s gloomy trap-ballads, for instance, or in the imagistic expressions of violence characteristic of drill music, but Madlib’s production, which on Bandana is lusher than ever, full of orchestral string samples and full-bodied synth pads, provides Gibbs’ distinctly modern raps with a fittingly backwards-looking backdrop.

On the titular ‘Bandana’, which oddly enough was released as a standalone promotional single, not actually appearing on the album, Gibbs conjures the striking image of a bloodstained bandana – an apt metaphor for that which his music reckons with. He’s a grown man now, a father, and his days of hustling to survive are over, but that bandana, that symbol of the best and worst aspects of his past, still lingers. He can’t bear to part with it, nor can he wash out its stains. (8/10) (Brendan Nagle)

Listen to Bandana by Freddie Gibbs & Madlib here via Spotify, and tell us what you think below!