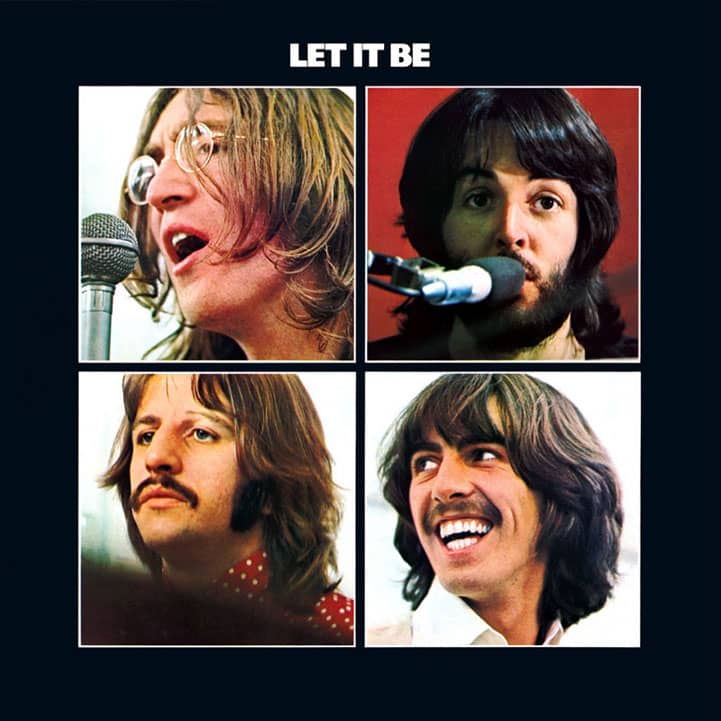 When considering Let It Be, the final album that The Beatles released in chronological terms but not the last music they created together, it’s hard not to be struck by how ironic it is that the most trailblazing pop career in history should end with such a whimper. But perhaps it was inevitable – the death of their manager Brian Epstein two years previously had created a power vacuum, an absence at the centre of a whirling, centrifugal force that had held everything together but now threatened to throw everything off balance. Their company, Apple Corps, was haemorrhaging money, and the band were all approaching 30 and had, to a greater or lesser extent, stopped enjoying each other’s company and were pursuing other projects. Hard to be at your most creative or inspired in such circumstances.

Released in early May 1970, several weeks after the group’s final disintegration had been made official, Let It Be is not a bad album per se, housing at least three of the Fab Four’s most famous tracks. It’s just that it’s so obviously not a suitable epitaph, several notches below the extremely high bar in quality they had set for themselves ever since Help! half a decade and six albums before. It didn’t help that Let It Be was not the product of unified, concerted sessions, instead assembled from a variety of sources, none of them particularly optimal. The idea behind Let It Be came from Paul McCartney, still the most dedicated member of The Beatles and who wanted the band to return to their rock’n’roll roots after the psychedelic and experimental blowouts that had spawned Revolver, Sgt. Pepper’s Lonely Hearts Club Band and ‘The White Album’.

Assembling at a massive, freezing aircraft hangar in Twickenham, London in January 1969 with the sessions to be filmed for the purposes of a documentary focusing on the band’s much-mooted return to live performance. Snippets of film show a cold, fed-up band riven with factionalism and rivalry, with George Harrison soon temporarily quitting the group altogether, as the most averse to returning to the days of Beatlemania. There was also confusion from the top down: a new face in the form of Glyn Johns, who wasn’t exactly clear about whether he should be producing or merely engineering, overlapped with long-time producer George Martin, who was attached to the project but in a very informal and hands-off manner.

Harrison was soon persuaded back, on the condition that those particular sessions were abandoned and that the band would return to their own Apple studio. ‘Get Back’ was the solitary studio track yielded, with guest keyboardist Billy Preston, followed soon by The Beatles’ famous impromptu live rooftop performance – from which three of Let It Be’s tracklisting were eventually taken. Everything was then put on hold to record Abbey Road with George Martin, after which John Lennon quit in September 1969. Let It Be was then finished with help from individual Beatles plus Glyn Johns, only for a highly divisive eleventh-hour intervention from mercurial pop genius Phil Spector at the behest of the similarly controversial figure of Allen Klein. The most high-profile victim of Spector’s approach was, of course, ‘The Long And Winding Road’, issued as The Beatles’ final single in mid-1970. But even if you strip out his saccharine strings and orchestral bombast, you’re left with a pretty underwhelming song in any event.

The result was an album that has consistently split opinion. Regardless of your fondness or otherwise for any of the individual songs, the inescapable conclusion is that Let It Be is the sound of a great band going through the motions. At no point are The Beatles operating at their highest levels, either collectively or singularly, and as a listening experience it’s 35 minutes of strange juxtapositions of material that clearly wasn’t all recorded at the same time or place. Lennon’s slightly gloopy ‘Across The Universe’ dated all the way back to February 1968, nearly an entire year before Let It Be was even proposed and when Lennon’s love for Maharishi’s philosophy was still intact. ‘Get Back’ had hit the top of the charts as a single 13 months previously. The inclusion of two sub-minute song sketches, a lame cover of the traditional ‘Maggie Mae’ and the bizarre ‘Dig It’, is baffling. The group’s putting-on of silly voices at the end of the latter as the tracklisting segues into the sepulchral, gospel-influenced ‘Let It Be’ is a jarring sequence. Even George Harrison’s contributions are underwhelming – the simple 12-bar blues of ‘For You Blue’ is lightweight, and although the rocking second phase of ‘I Me Mine’ chimes with the central theme of Let It Be, it’s surrounded by annoyingly slight material.

For all its obvious flaws, however, there are glimpses of the old Beatles camaraderie and alchemy that give Let It Be at least a residual charm, and make it a fascinating musical document, if not an entirely fulfilling one. The twee country-rock and harmonising of opening track ‘Two Of Us’ is charming, with poignant lines hinting at Lennon and McCartney’s relationship like “you and I have memories / longer than the road that stretches out ahead” pre-echoing lyrics such as “the love you give is equal to the love you make” from Abbey Road’s ‘The End’. The rock ‘n’ roll throwback of ‘One After 909’ is what imagines McCartney had in mind when he proposed Let It Be in the first place – you can imagine the Fab Four smashing it out with relative ease and tremendous panache back in their pre-fame Cavern days. Although it’s stitched together from two left-over songs, ‘I’ve Got A Feeling’ exudes the same vibe, and there’s a certain enjoyable daftness to the self-consciously nonsensical ‘Dig A Pony’.

The title track ‘Let It Be’, of course, is one of McCartney’s most famous and beloved songs, written in reference to his mother and a moment where Spector’s production actually works in its favour, the stacked blues guitars and carefully placed masses of backing vocals done tastefully. It also lends the album an air of finality, the listener made aware that pop’s greatest career arc is winding down in front of your ears, yet still capable of genius even though the cynicism, ego clashes and discord had long since set in.

Let It Be’s general vibe of back-to-basics cheeriness doesn’t reflect the unhappy emotional circumstances of its creation, but its highly uneven structure and overall stitched-together nature does, and for many has proven to be its downfall. Certainly, there’s been nowhere near as much criticism aimed at any other album The Beatles did, even the noticeably tired-sounding Beatles For Sale. The fascinating emergence of 2003’s Let It Be… Naked, which unveiled newly mixed versions of the original demo material before Phil Spector had gotten his hands on it and stripped out the incidental, irritating studio chatter between songs, shows that there was a much better album striving to emerge. The inclusion of the rootsy ‘Don’t Let Me Down’, originally the B-side to the supreme blues shuffle of ‘Get Back’, would perhaps have gone a long way to achieving this.

It’s more comforting to think of Abbey Road as the Fab Four’s real swansong – creatively speaking, it indeed was. Let It Be is the chronological end-point, the result of a desperate attempt to convey to the outside world that The Beatles was still a viable entity, despite one-half of its core writing team having quit some six months before. It feels fragmented and difficult to define because McCartney, Lennon, Harrison and Starr never agreed on what they wanted it to be in the first place. Recorded joylessly and in spurts, set aside then salvaged at the last minute, it’s still the most unknowable album by the most written-about pop artists in history. For that alone, Let It Be is always worth revisiting.

Listen to Let It Be by The Beatles here via Spotify, and tell us what you think below!