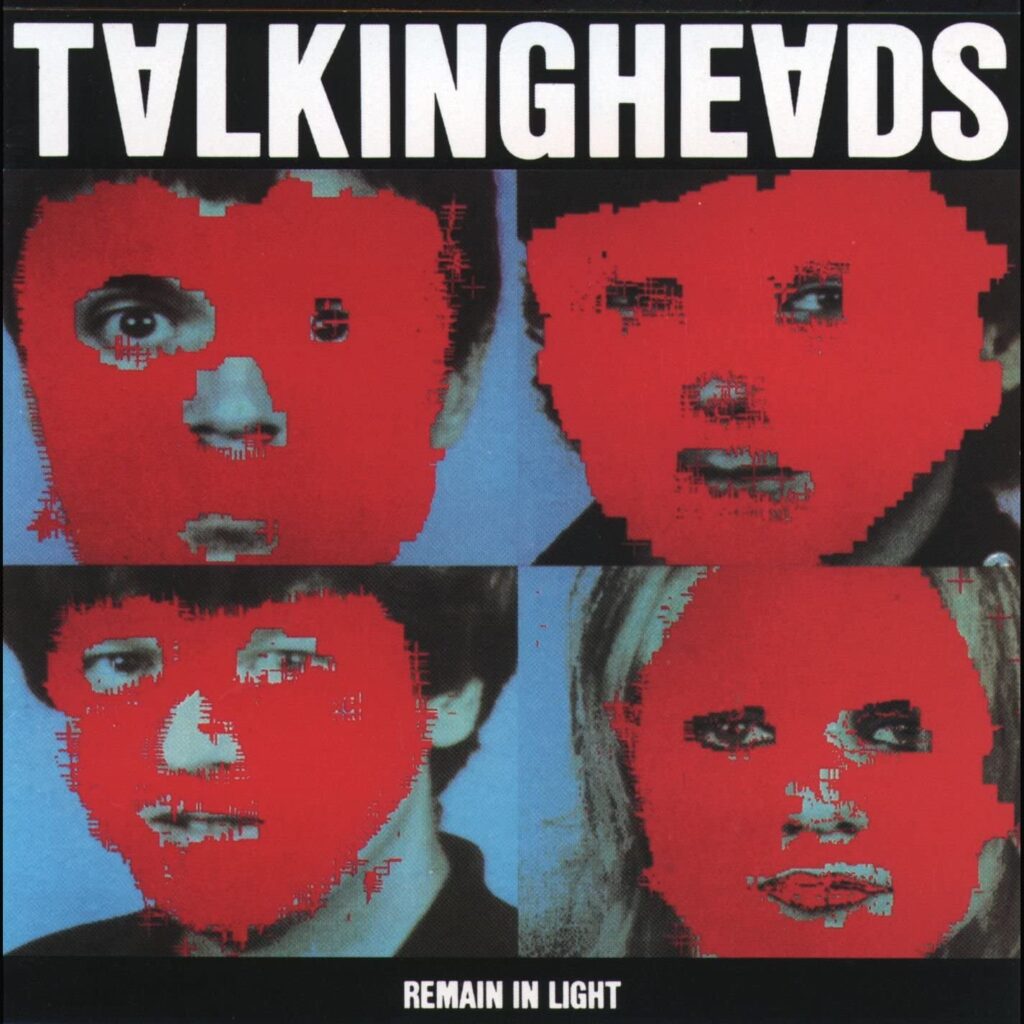 Critically acclaimed albums that appeal both to the intellectual, cerebral aspects of our humanity as well as the body, the heart and soul are few and far between. Indeed, most successful artists are either extremely good at one of these qualities to the almost total exclusion of the other, as if the entire field of pop music were some sort of sliding scale. The consistently stellar reputation of Remain In Light, the fourth studio album by Talking Heads released in late 1980, is certainly down to the fact that it makes you think and feel at the same time. A dense yet immaculately textured weave of new wave, post-punk and art-pop with elements of funk, psychedelia and Afrobeat, it’s an avant-pop masterpiece that sounds as sophisticated and forward-thinking as it did four decades ago. As such, Remain In Light is still a wellspring of inspiration of artists today.

Remain In Light had its genesis in the various side-projects upon which the members of Talking Heads embarked in the first months in 1980, following the end of their tour in support of 1979’s highly acclaimed Fear Of Music. Rhythm section (and married couple) Chris Frantz and Tina Weymouth purchased an apartment in the Bahamas and became interested in native percussion instruments and religious ceremonies; guitarist Jerry Harrison produced an album with soul singer Nona Hendryx; and lead singer David Byrne worked with Brian Eno – the producer of the band’s last two albums – on an experimental record My Life In The Bush Of Ghosts, belatedly released in early 1981. It was this last endeavour that turned out to be influential upon Remain In Light, exploring African and Middle Eastern rhythms and integrating them with sampling techniques, field recordings and other found sounds.

Convening at Compass Point Studios in the Bahamas in the summer of 1980, Byrne initially struggled with writer’s block until the band collectively made the decision to create collectively from the ground up, as opposed to their normal method of writing music to Byrne’s pre-existing lyrics. Rather than simply imitate African and other world music, the stated aim of the band here was a true hybridisation of conventional rock with African polyrhythms, using Brian Eno’s famed creative and production techniques that he had used with David Bowie to help make the latter’s famed ‘Berlin trilogy’ a couple of years before. Byrne overcame his own creative impasse by deploying methods used by African musicians and hip-hop artists, anticipating the way that hip-hop producers and rappers would later work from beats and samples and lay lyrics, vocal performances and melodies down on top of these. Essentially, Fear Of Music’s outlying opener ‘I Zimbra’ would be the basic template for proceeding with Remain In Light.

The recording process was quite different from the Talking Heads’ previous albums, not least the extent to which drummer Chris Frantz and bassist Tina Weymouth felt alienated from a process that they felt was being driven almost entirely by Byrne and Eno. Additional percussionists were required to bring the ideas to life in the studio, and when it came to touring, Talking Heads’ number swelled to more than double its normal size, augmented by guitarist (and future David Bowie collaborator) Adrian Belew, Funkadelic keyboard player Bernie Worrell, accomplished session bassist Busta ‘Cherry’ Jones and backing vocalist Dolette MacDonald among others. The performances were a tremendous success, acclaimed for the scale of the band’s vision and its execution, but Weymouth in particular felt sidelined by the whole process, often humiliated by Byrne’s insistence on what amounted to her having to audition for her own job as the group’s music became more complicated and the album’s sessions moved to New York’s Sigma Sound studio.

Under Eno’s guidance, the recording studio became a tool to aid the creative and writing processes. The musical beds for Byrne’s lyrics were created by the band largely through improvised jams, which would throw up short musical phrases that would then be rigorously repeated to the point where Harrison, Frantz and Weymouth could perform them unconsciously, almost trance-like. This effectively turned the group into human samplers, using loops at a time when technology wasn’t quite able to adequately perform these functions.

Remain In Light’s themes of identity loss and disruption are introduced to us through the striking artwork, a disarming and disturbing image of the band’s faces pixelated out in what was one of the first-ever computer-designed album sleeves. Byrne’s elliptical, often impenetrable lyrics seem to speak to a loss of personal control, of individuals being at the mercy of unseen forces and whose sense of identity and place in the world is surrendered or subsumed. Think of the album’s most famous track, the mid-life crisis and existential ennui of ‘Once In A Lifetime’ – inspired by a sermon he heard delivered by an evangelist preacher on the radio, the incantatory, almost congregational “you may find yourself / you may ask yourself” lyrical scheme so accurately describes that moment of clarity people often reach about their own lifestyles and the sense of alienation we feel from the processes of modern life. A dazzling, liquid production, the song’s themes about acting on autopilot were amplified by its famous music video of Byrne’s spasmodic, contorted dancing, portraying an individual not entirely in control of his actions.

‘Once In A Lifetime’ is unquestionably one of the most influential songs in modern pop and can overshadow its parent album, but Remain In Light is full of these moments of revelation. When set to kinetic rhythms to which the body simply cannot help but move at least a part of itself, Byrne’s themes are elevated to create a perfect marriage of content and form that addresses humankind’s anxieties about the modern Western capitalist condition but also fits absolutely perfectly with the dancefloor.

Talking Heads get straight into it on the sublime opening track ‘Born Under Punches (The Heat Goes On)’, whose lyrics speak of the same kinds of individual neurosis that Byrne had long since made his territory, only expressed even more cryptically (“Take a look at these hands / The hand speaks / The hand of a government man / I’m so thin”) and welded to rolling funk-pop polyrhythms and wiry, nervy post-punk. The key to the song’s enduring success, and that of Remain In Light as a whole, is that Eno and Talking Heads treat the Afrofunk source material with just the right mix of respectfulness and playfulness. While debates have always raged about the extent to which artists should be watchful of historically ethnic divisions between musical forms, it can’t be denied that Remain In Light was both effective and compelling.

Every one of the album’s eight tracks are absorbing experiences that seem to disgorge new, unheard aspects with each listen, no matter how familiar the listener is. The trance-like ‘Crosseyed And Painless’, with its lyrical delivery and construction inspired by early hip-hop (“facts don’t do what I want them to”), and the frenetic epic ‘The Great Curve’ close out a truly unforgettable first side to the album that feels like a non-stop sonic onslaught, of every musical element attacking the listener at once. With its frantic yet totally controlled syncopation and lyrics about “the world moves on a woman’s hips”, the latter seems to come closest to the hypnotic, transportive state of music-making ecstasy that the band took inspiration from.

Remain In Light’s second half is a little looser and more introspective, but no less striking. The stormy, muddy funk of ‘Houses In Motion’, with its muttered vocals and ominous tones of synth and brass punctuating the mix like a warning siren, made for an unusual choice for a second single. The choppy hip-hop rhythms of ‘Seen And Not Seen’ underpin an oblique commentary on the nature of man’s vanity; the spooky, foreboding ‘Listening Wind’ sees Jerry Harrison using his guitar to lay down texture; and the funereal, monolithic bassline of closer ‘The Overload’ was apparently an attempt to approximate Joy Division after they’d only read about (and not actually heard) their music.

It all adds up to an album of resolved contradictions. For a record by a post-punk / new-wave band that didn’t have anything approaching a conventional guitar riff, Remain In Light made complete and immediate sense to their fanbase and the wider scene they came from. For an album whose gestation was characterised by delay and piecemeal construction, it feels absolutely spontaneous and life-like at all times. For an album whose themes concern artifice, it’s earthy and vital throughout. While it was a massive critical success, the tension created by Remain In Light’s recording process, as well as a painful dispute over crediting after its eventual release, caused a rift within Talking Heads – Frantz and Weymouth vs. Byrne, essentially – that never managed to heal. But even then, there was enough harmony and shared vision that they subsequently made four more albums together, including the commercially successful Speaking In Tongues in 1983 and finding huge mainstream acceptance with ‘Road To Nowhere’ in 1985, before finally disintegrating in the early Nineties.

Forty years later, Remain In Light is objectively one of the most influential and well-regarded albums of the Eighties, perhaps of all time. Virtually every Western band seeking to blend non-Western styles into their music has sought inspiration from it – basically, every time you read a hack reviewer like me use the word ‘polyrhythms’ to describe a band’s music, it’s a shorthand for ‘influenced by Remain In Light’. More crucially, it was a masterpiece that proved that pop music could be intellectually and physically stimulating at the same time. Perhaps most prestigious of all, in 2017 Remain In Light was selected by the Library of Congress for preservation in its National Recording Registry, an honour reserved for works it deems “culturally, historically, or artistically significant”.

Listen to Remain In Light by Talking Heads here via Spotify, and tell us what you think below!