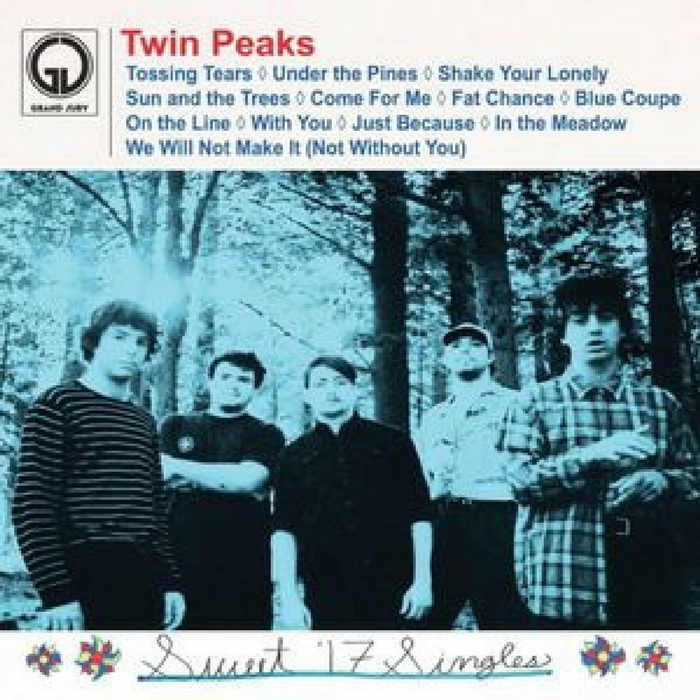 Collecting 12 months’ worth of sporadic recording designed to be listened to individually, ‘Sweet ’17 Singles’ is perfectly enjoyable but doesn’t move Twin Peaks forward.

Twin Peaks don’t really care for conceptual albums and/or grandiose over-arching themes. A year ago, the energetic Chicago outfit announced that they’ll be releasing a single each month for the next year, supposedly to churn out some new music out while touring. All this resulted in an eclectic, at times too lovey-dovey but nonetheless fun compilation Sweet ’17 Singles. Here, the raucous Twin Peaks soften up even more and slip into some yet untouched stylistic territories, moving away from the established garage rock sound of their debut album Sunken and continuing down the subtler but nonetheless nonchalance veiled rock’n’roll path that produced the live shows for which they’re loved.

It’s unclear whether Sweet ’17 Singles was intended to be a stylistic experiment for Twin Peaks or not. On this album, the sound sways from country to fuzzy indie-rock or even ‘elevator music’. The lack of consistency makes sense considering the aim of the band wasn’t to release a cohesive musical project but rather let their creativity out to play. And play it did. There’s nothing revolutionary in Sweet ’17 Singles, but it has captured the essence of Twin Peaks – they’re just a bunch of twenty-something dudes who do music and like to have a few beers while spending their life on the road and eating crap food just to play an explosive live show in some city.

Judging from the lyrics, for the past year, the guys from Twin Peaks thought a lot about love (most of the tracks on the album are about romance), loneliness and about friends that died because of drug abuse. That’s the aforementioned elevator music-esque track ‘Blue Coupe’, which sounds like it would fit a soundtrack of a romantic movie set in New York better than a lament on remembrance, but it’s a pleasing contrast, even though that’s probably the most un-Twin Peaks track on the compilation. ‘Shake Your Lonely’ has a whiff of that classic Devendra Banhart sound while the vocals in ‘On The Line’ hint at, surprisingly, something that Elliott Smith could have sung if he preferred simpler lyrics.

Continuing the sonic similarities list, ‘With You’ whips out some gnarly synths and melodic lines that would make Mark Foster proud. All that aside, Sweet ’17 Singles offers a fair share of classic Twin Peaks-ness as well. ‘Sun And The Trees’, sonically reminiscent of The Strokes, pays homage to the moodier, fuzzy indie rock side of the Twin Peaks repertoire while the track ‘Fat Chance’ with its more evocative lyrics (“I’ve been feeling weary, 70 degrees in February / Mama’s raking leaves, and I’m about to leave / I-90 barrelling down, Pacific Northwest-bound”) stands confidently as a solid country track, a style in which Twin Peaks have dabbled in before, especially in their penultimate 2016 release Down In Heaven. It sounds almost like something somebody who has never heard Bob Dylan would think Bob Dylan sounds like, in the best way possible. Stand out tracks like ‘Tossing Tears’, ‘Under The Pines’ and ‘In The Meadow’ showcase the best that Twin Peaks have to offer – their melodic richness and comradery, obvious both in the way Twin Peaks write music as well as perform it.

Sweet ’17 Singles is very much an album that either captures your attention or not at all. Twin Peaks don’t like to overanalyse or overcomplicate their writing, so there’s no underlying big themes to scour for during the fourth listen. One could say Twin Peaks fall into the category of music that a lot of today’s indie is in – you wouldn’t change the station if you heard it on the radio, but it doesn’t exactly stick with you as a track that you couldn’t live without. There’s loads of similar songs.

Nevertheless, Twin Peaks overcome this by not striving to be the next greatest thing. They’re comfortable in their happy-go-lucky way of writing music and revel in their live shows, grown from the Chicago basement rock soil. Sweet ’17 Singles is a satisfying, warming compilation of a dozen melodically solid tracks that can easily accompany your next great American road trip (stereotypically) or just scratch the itch for some wholesome rock’n’roll. (6/10) (Aiste Samuchovaite)

Listen to Sweet ’17 Singles by Twin Peaks here via Spotify, and tell us what you think below!