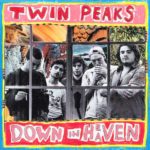 It appears Twin Peaks are in the process of parting with their adolescence. In typical high school band style, the Chicago quintet released their lo-fi, angst-propelled debut mini-album Sunken in 2013 in an attempt to stimulate interest from America’s petulant and apathetic youth. Since then, much has changed. Having embarked on their quest in the search for musical maturity via 2014’s Wild Onion, Twin Peaks’ new record Down In Heaven could be another nudge in the right direction.

Listening to Twin Peaks’ short discography is like perusing the pages of a family photo album. The chronologically sharpened production quality represents the band’s musical and personal development. Down In Heaven, being the latest addition to their back catalogue, depicts a band ready to step into manhood. Not only managing to shake off their recurring habit of strumming endless power chords, Twin Peaks have unearthed a more laid back sound by pulling the jack straight out from the amplifier.

Arriving just in time to catch the summer vibe, Down In Heaven’s acoustic feel is a sun soaked soundtrack for the months that lie ahead. From the crisp, acoustic jam that features on ‘Heavenly Showers’ to pleasant roll of ‘Walk To The One You Love’, Down In Heaven may be unwelcome arrival for early Twin Peaks fans but is surely a step in right direction if the band wish to increase their music’s fluidity. (7/10)

Listen to Down In Heaven via Spotify here, and tell us what you think below!