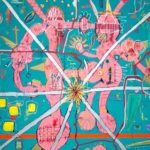 We can all remember Alex Turner’s triumphant, mic-drop acceptance speech following AM’s Album of the Year victory at the 2014 BRIT Awards. “Rock ‘n’ roll will never die” was his ego-encased message to the watching world. Two years later, it seems fitting that his choice of support act to accompany The Last Shadow Puppets’ latest venture reinforces his statement’s sincerity accordingly.

Not only is Yak’s debut album, Alas Salvation a suitable representation of the London trio’s renowned, explosive live performances, but also a reassuring indication that the long-predicted extinction of ‘back to basics’ guitar distortion is far from becoming a reality. Incorporating the similar blend of beaten up guitar riffs and ear-splitting feedback pioneered by The Stooges the best part of half a century ago, Alas Salvation is like being continually punched in the face with each beat inflicting more turmoil than the last.

Each song feels as though the melody’s been shattered and precariously placed back together in a disorderly but satisfyingly hectic fashion, providing Yak with the coarse texture they set out to coat themselves in. Defiantly emerging from the sludge, Alas Salvation is a welcome reminder that the spirit of sex, drugs and rock ‘n’ roll is yet to have a foot in the coffin. (8/10)

Listen to Alas Salvation here on Spotify, and tell us what you think below!