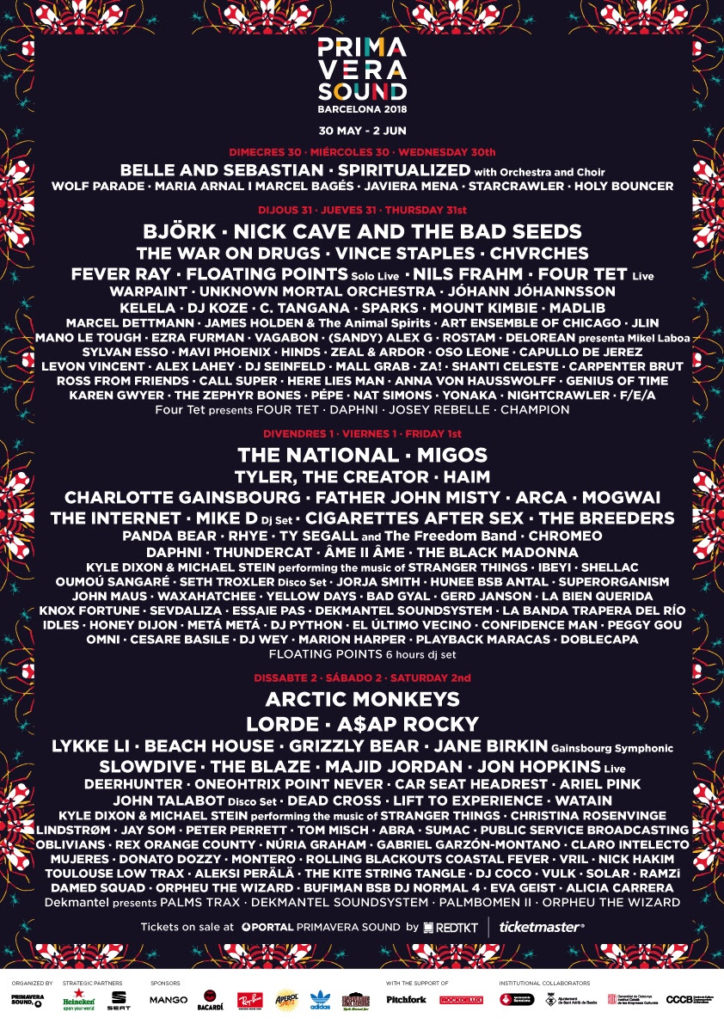 Imagine a festival on an idyllic beach, where it doesn’t rain, headlined by the best musicians from a plethora of genres at the top of their game… You just imagined Primavera Sound 2018, the biggest and best indie festival in Europe.

Located on the Barcelona coast, Primavera Sound really is the perfect escapism from the cold and wet weather of Northern Europe. If you’ve never been to Barcelona then you’re missing out; there’s the beautiful and historic culture (the work of Gaudi is everywhere, while the Gothic quarter is full of amazing architecture at every turn), the brilliant food (which is only getting better for veggies and vegan alike – and besides, who doesn’t love tapas?) and a laid-back atmosphere which feels wonderfully refreshing in comparison to the turned-up-lip attitude which seems to prevail in the UK.

Now, onto the important stuff – a festival bill, after all, is incomplete without its artists. As always the 2018 festival is stacked with names from all genres. Headlining this year’s event are Bjork, Nick Cave & The Bad Seeds, The National and a returning Arctic Monkeys who will be playing their first gig in over three years when they take to Primavera stage. Elsewhere we have Lorde, HAIM, Chvrches, The War On Drugs, A$AP Rocky, Tyler The Creator and that’s just on the top two lines of the bill.

Simply put: Primavera is a festival with star power in abundance. This isn’t a festival which relies on nostalgia to front its line-up, every artist on the bill is touring a terrific album and the diversity of the acts makes it all the more exciting. How many other festivals could you go from seeing Arca to Father John Misty? The legendary Art Ensemble of Chicago to Kelela? There simply isn’t enough time for me to list all of the great acts on the poster, so discover them for yourself here.

Speaking of discoveries, who doesn’t love to find some new music? There’s Yonaka, Jorja Smith, Kelsey Lu, Rex Orange Country, Ganges and so much more. While there’s also room for the traditional performances from DJ Coco, John Talbot and his yearly disco set and, of course, Steve Albini’s Shellac – who have brought their fiery rock to every edition of the festival.

Another thing which makes Primavera so great is the unannounced acts; last year’s event saw headliners Arcade Fire perform on a tiny pop-up stage, while Mogwai performed their newest album a full three months before its release and HAIM made an unexpected appearance at 3am. Who will be the unexpected names for this year? Organiser Gabi has said that there will be “a lot more” unexpected Primavera this year – I’m predicting a returning Courtney Barnett and Vampire Weekend for what it’s worth.

Oh yeah, the times of the festival… well, Primavera runs pretty much all day with the dance stages opening as early as 12pm and closing at 6am, but don’t expect to see a headliner take to the stage before midnight with the main stages starting at around 6pm. This is the festival for all of you night owls and if you’re not a night owl, then coffee (or jagerbombs) will see you through.

So, what are you waiting for? Head on over to the East coast of Spain for a WEEK of terrific music, weather, food and culture. And if you aren’t sold yet on Primavera Sound 2018, then here’s a handy playlist of our favourite acts at the festival.

Are you going to Primavera Sound? Let us know about your experiences with the festival and if you have any questions about just what to expect at the event, then you can tweet us (@StudentPlaylist) or you can find John personally (@JohnTindale1996)!